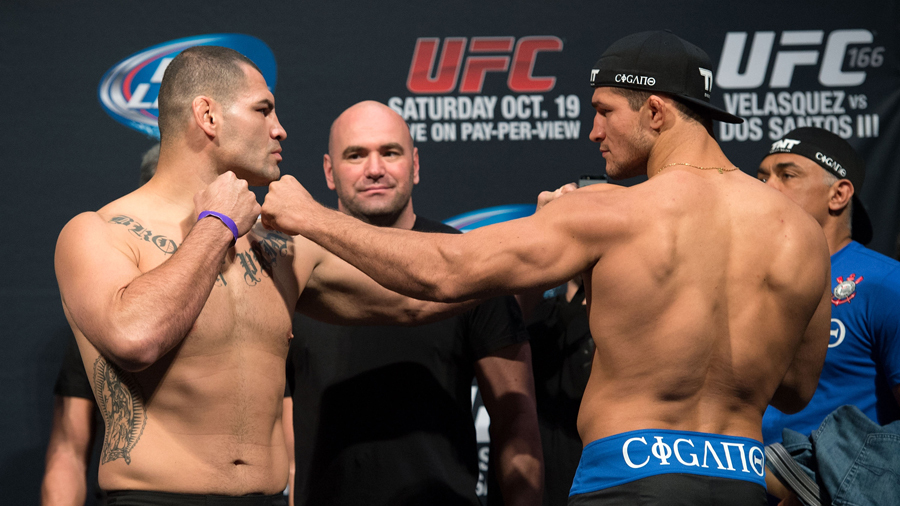 Yesterday, we previewed the main event and no one took Junior Dos Santos. I wonder if we jinxed Cain Velasquez.

I’m more hyped for this show than I’ve been for a UFC show in quite a while.

Dodson’s hands were just too fast and powerful. He put Montague down with a wicked combination early, but Montague got up. In the center of the octagon, Dodson throw a nasty left hand and Montague Flair-flopped right in the middle and it was stopped.

Jordan landed a jab and missed his power shot and almost like he was hitting mits, Gonzaga threw a counter right and put him out. That’s two quick knockouts in two fights.

Winner: Gabriel Gonzaga by way of 1st round TKO

Melendez has his right hand working like a trigger to counter whatever Sanchez is doing. He’s already cut over his left eye. But he still came forward. There was a crazy flurry at the end of the round and they went toe to toe. Sanchez mostly missed, but Melendez connected right on the Sanchez’s chin and buckled his knees to end the round. The cut is deep.

Sanchez was competitive, but Melendez was connecting with the bigger shots again. Sanchez sensed that the fight could’ve been stopped because of the cut, and he kept on coming. Melendez had a right-hand answer for him though. Sanchez did get a takedown late, but couldn’t hold him.

Sanchez is trying to get Melendez to engage and he obliges by hitting him with accurate right hands. Sanchez powered up like Hulk Hogan and kept coming forward like a zombie. It was amazing. He’s absolutely won over the crowd. Sanchez caught Melendez with an uppercut! Melendez went down. Sanchez went for the rear naked but couldn’t get it. Melendez got back up and caught him with an elbow and a right hand. This is nuts.

Fight started slowly, but picked up near the end of the first. DC wrestled some early but then hit Nelson with knees to the head against the cage, but one was low and Nelson’s balls weren’t feeling too nice. Nelson was looking to land the right hand, but missed them all. Cormier connected with some fierce right hands.

Round two was similar to round one. Cormier used his wrestling and a vicious left hook to do most of his damage. Nelson looks tired while Cormier looks fresh.

Very strategic third round for Cormier. He paced it well and kept his distance perfectly. He landed a right hand, rushed Nelson and hit him with a high-cross body takedown. He kept his range the rest of the round even though Nelson tried to entice him by putting his hands down.

Dos Santos rocked him right from the get-go, but Cain didn’t panic. He kept coming forward, took another shot, and then started to control the fight. He kept pushing him up against the cage, landing right hands within distance. His attacks were varied and Dos Santos just looked frustrated.

Cain’s persistence is paying off, but there’s a lot of fight left in Junior. When he’s able to, he’s getting his shots in, but Cain’s not letting him breathe, smothering him up against the cage. Junior landed a short elbow that buckled Cain right as the round ended. I have Cain up 2-0.

I’ve never seen a 10-7 round, but man. Cain knocked Dos Santos down with an overhand right and pounded him on the ground. Dos Santos got back up and nearly fell back over without even being punched. Herb Dean almost stopped this thing three times. Cain followed up with a right hand that nearly put him down again. Dos Santos wasn’t even getting his hands up. That was brutal.

That round was hard to watch, but JDS was still throwing punches. There wasn’t much sting in them left. But man, he was still throwing them. Cain kept him up against the cage and battered him. JDS’s face looks like Rocky’s after the first Rocky. The doctor came in to check the cut and just to see if JDS had his wits. I don’t think he does, but she let it continue.

JDS went for a tired guillotine as a last ditch effort and he fell to his knees and DDT’d himself. He covered up while Cain pounded on him. Thankfully, Herb Dean stopped it.