I wouldn’t say that the show was boring. It had its moments, but you have to start wondering if Triple H is really building an angle to create a new star or to make it all about himself.

The Big Show shows up via satellite.

The show started with Triple H and Stephanie McMahon in the ring, as per usual. The Big Show cut in via satellite and irritated them. Stephanie couldn’t figure out how he was able to tap in and be shown on the Titan Tron. Big Show is suing Triple H for his contract and for other things that he was general about.

This is only a big deal because of how the show ended. And it definitely looks like Triple H vs. The Big Show is the big match for Survivor Series even though once they hit the ring, no one will care at all.

The main event angle was a contract signing between Randy Orton and Daniel Bryan. Shawn Michaels (who was on the show earlier in a segment with Triple H and Stephanie talking about how they have changed), Triple H, and Stephanie were in the ring for the signing.

Triple H blasted Bryan for not being “the one” and then said that Chris Jericho and RVD were spoiled and whiney and were not the one. And if they were the one, WWE would be run by Ted Turner, which is not really true from a time perspective.

I’m not sure if Chris Jericho was really bothered or even saw the angle, but it caused him to tweet, “Thing is @tripleh despite ur major push,u never were either. Good luck in ur future endeavours.” I’m not sure if that means he doesn’t want to work there or not, but everything he’s said recently was that he gets along with Triple H. Maybe he’s building for business down the line. 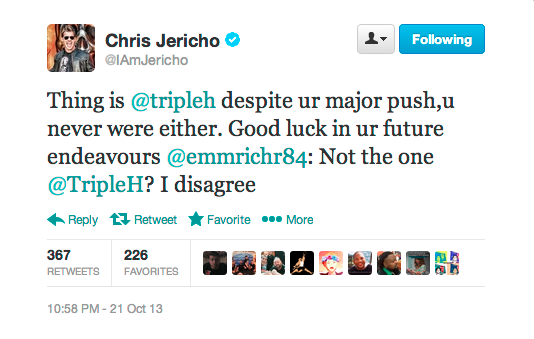 When Bryan wanted to face Triple H, Triple H says he only faces stars and not a B+ like Bryan. Michaels jumped in and chastised Triple H a bit but said he would make sure there’s a new champ and HHH said that Shawn would do what’s best for business.

The Big Show brought a big rig into the arena solely to distract Orton so that Bryan could give him the flying knee. Bryan then left to celebrate with Show to end the show.

It’s just too bad he wasn’t gone longer. They did another really good video to hype his return. Oddly, Alberto Del Rio wasn’t on the show.

Not quite the build for Hell In A Cell many were hoping, but also not a boring TV show.

2 thoughts on “The Raw Rerun – The Contract Signing”