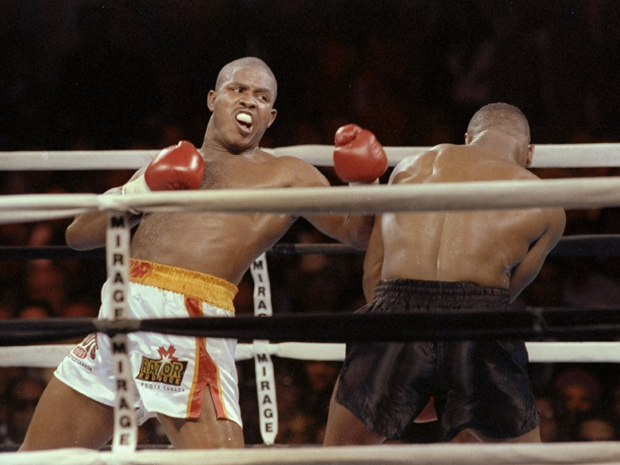 With boxing doing extremely well on PPV for two months in a row (likely three), it’s time we look at one of boxing’s lost heroes.

Donovan “Razor” Ruddock was one of boxing’s wackiest characters and someone who I remember as a kid, but many others don’t. Imagine a gigantic 6’3 Jamaican; ripped and dangerous-looking. Most folks would think of Lennox Lewis (even though he is not Jamaican, many folks swear he is) but indeed, Razor Ruddock actually has a win over Lennox in the amateur ranks (amateur punk stuff as Bobby Heenan would say). Ruddock came into the pro ranks of the sport like a house of fire, with a number of victories leading into a series of knock outs before he would face the man himself – Mike Tyson.

Its funny because as a kid, I don’t remember anybody thinking that Mike Tyson was going to lose. But when you look at Ruddock and his size and length, you’d think well… hey.. maybe… ehh no. Mike Tyson was murdering guys and had a reputation for it. But Ruddock had a weapon that was no secret; a dangerous left hooking uppercut – which he called “The Smash”. Many great fighters have had a favorite punch, but how many of them have given their punch a pro wrestling gimmick name. “The Smash” put fear in many heavyweights. This man was dangerous!

Mike Tyson was not one of those heavyweights. That being said though, their two-fight series in Las Vegas was memorable for a few reasons. One of them was the sheer brutality of the fights. As a big young fight fan, I remember Ruddock rocked Tyson a few times. I was shocked! I’d never seen Tyson rocked like that before then, but I hadn’t seen all of his fights either. Then came round 7, when the fight was stopped wayyyyyyyyyyyy too early. We’ve seen a lot of premature stoppages for the safety of the fighters, but Ruddock got hit a few times and looked fine! He was still standing. Of course, like so many famous moments in 90s boxing – it broke out into a big brawl. I love me some boxing brawls!

The folks DEMANDED they fight again! Their rematch happened only four months later. This time though, Tyson pretty much pummeled him. Allegedly, Ruddock had a broken jaw, but because he is an alpha male, he hung in there, going the distance with the baddest man on the planet. Even Tyson put him over in the post-fight interview.

Naturally, a rematch with Lennox Lewis needed to happen and in 1992, Lewis exorcised his Ruddock-sized demon and knocked him out in the second round (I thought it was kind of hilarious the way he went down). This was pretty much IT for Razor as far as being a serious contender for the title. He fought the late Tommy Morrison in 1995 and that was really the end of Ruddock’s spotlight.