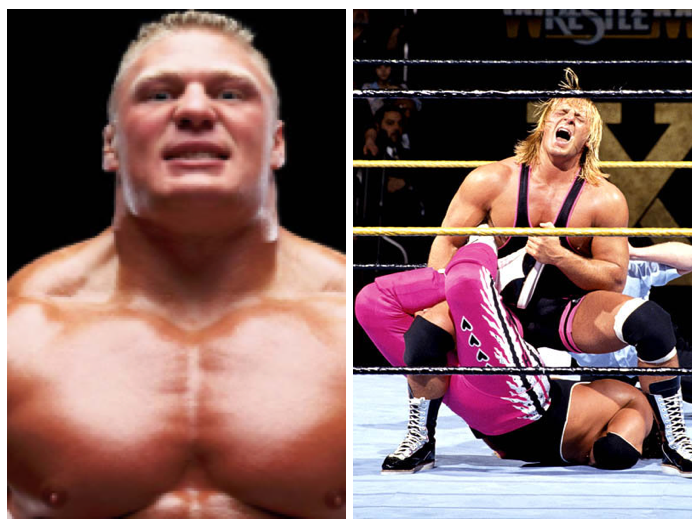 We’re down to the semi-finals. The final two matches are Owen Hart vs. Brock Lesnar and Stone Cold Steve Austin vs. Bret “The Hitman” Hart.

Today, we’re talking Owen vs. Brock. It’s the one-time high flyer who evolved into a great mat wrestler against the beast, the next big thing.

Alan: This one is a slam dunk. Brock is bigger, stronger, more athletic and maybe even faster than Owen. Surely he walks right through him, right??

GG: I’m picking Brock too, but I like the idea of Owen Hart being the underdog as I think he’d get an insane amount of underdog cheers from the fans.

Big D: I think you could tell the David vs. Goliath story very well here, but Brock is too big, too strong.

GG: If this were a real fight, Brock rolls through him. The match that is more interesting is if Bret Hart gets past Austin. But Austin vs. Brock is an insane matchup too.

Duan: This one hearkens back to an old favourite of mine – the Owen Vs Shamrock rivalry. I remember loving that feud just simply because of how tremendous Owen was at tormenting such a potentially dangerous foe. You would be waiting and waiting for Shamrock to final get his hands on him and some how Owen would always manage to scheme his way out of trouble.

Alan: Every tournament needs huge upset and this will be ours. The King Of Hearts miracle run will continue as he uses his most dangerous move, the KO Enzuigiri to knock the beast out long enough for a three count. The money shot will be Brock pulling a “Brock face” as he catches Owens first foot.

Don: I was also thinking upset, as every tournament needs one. Brock should just destroy Owen, and he would take the majority of the match. Then he’ll make a mistake and Owen will take over, but he won’t be able to finish Brock off. I see Brock almost losing the match due to a DQ when he loses his cool. Shoves the ref, grabs a chair, doesn’t break a five count. Something like that. But Owen convinces the referee not to call the match. Brock laughs at him, thinking Owen kicked his leg out of one too many legs.

Duan: I see this one as much the same with Brock just railing on him for the whole match only to be foiled in the end by some shenanigans by the King of Harts.

Don: But then Bork goes for the F5, Owen rolls through, grabs a little bit of tights, and he gets the surprise win.

The King of Hearts is onto the finals. Who does he face? He either faces his older brother or a nemesis, Stone Cold Steve Austin. 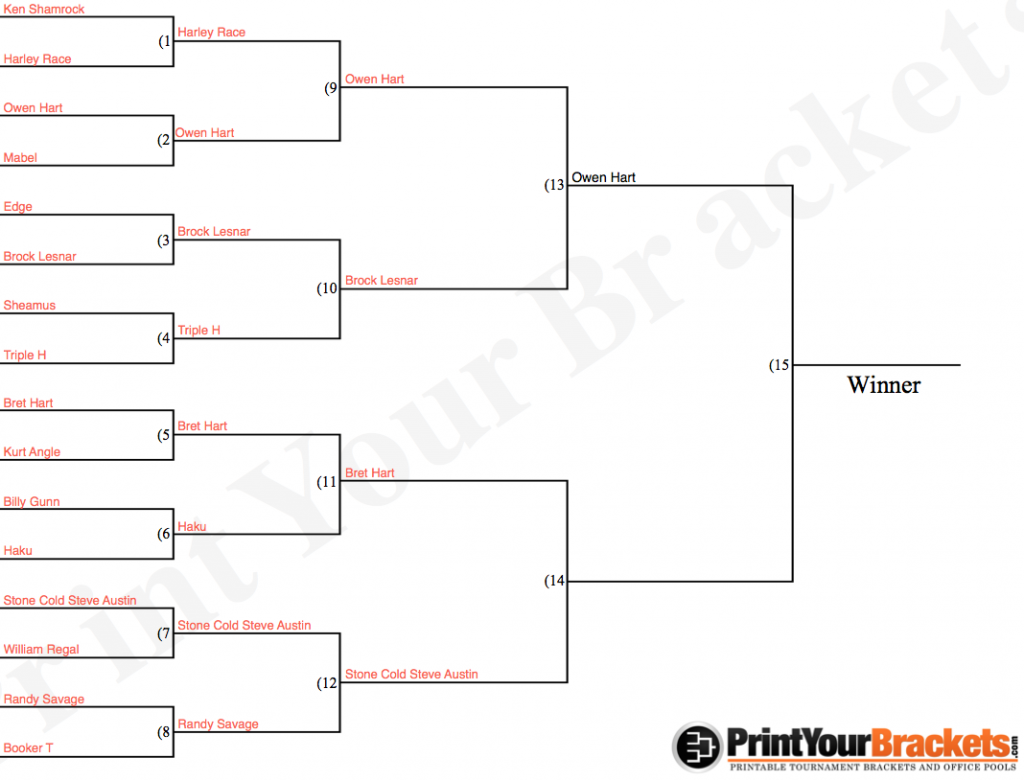