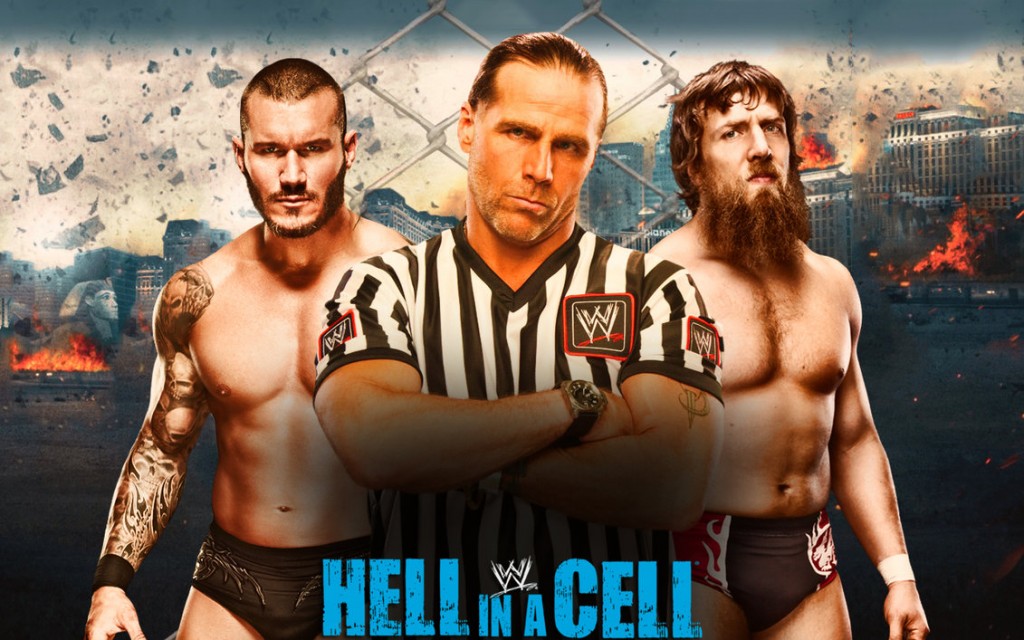 Including the kickoff match, there are only six matches on the show, which is less matches than on last night’s Smackdown. Thus, I expect at least one or two matches to be added, such as Los Matadores vs. the Real Americans or Dolph Ziggler vs. Dean Ambros (if he’s healthy) or maybe something with the Wyatt family and Miz.

However, I can only preview what’s been announced and made official. So here we go. This is your Hell In A Cell preview.

If they are truly behind Big E’s face turn, he should win this belt soon. Then again, with how the IC champion is usually treated, maybe he doesn’t want to win the title. I don’t think this is the time to do it. It should probably happen on Raw on Monday.

I think Ryback will come out and set up Axel winning after a Shell Shocked. Langston can then be involved in the Ryback match later one.

Cody Rhodes and Goldust vs. The Shield vs. The Usos

If given time, this one will be a great pace setter. The Usos are an underrated tag team and they seem hungry as in, when they get their TV time, they work hard and take advantage of it. I think the champs need to win this one as the crowd is really behind the Rhodes boys. Out of everyone, Seth Rollins should be the one pinned, simply because he’s the best seller of all six and whatever finish he takes will look magnificent.

I know I predicted this last month, but I truly think Brie should win the match and then celebrate with Daniel Bryan if he was to win. It’d be a nice story and it sets up a few different ways especially if they go back to John Cena vs. Daniel Bryan at any point. Tamia’s interference should backfire, or maybe Nikki interrupts possible interference and Brie can hit whatever she calls the X-Factor.

Hell In A Cell Match

I think the way to go for Punk unfortunately is for Ryback to win the match. It seems that they won’t let Ryback win strong, and at this point, it’s probably not the best idea to. But, he should win smartly and in a heelish fashion with Heyman’s help and finally, Heyman gets one over on Punk. Punk should then knock Ryback out with a GTS and also thrash Heyman, maybe putting Heyman out for a few weeks. They need some time away from each other and that might be a good way to do it.

I already wrote about how I’d book John Cena’s return, but we know that it’s not happening. John Cena’s winning this match and he’s taking home the strap.

I’ve heard a couple different ways that this can be done. He can win and have Del Rio re-injure him, setting up a return match on the next PPV. He can win, Del Rio can re-injure him, and Damien Sandow can cash in his Money In The Bank. I think that second idea is terrible. Sandow isn’t over in the least. I at least hope for the prior. I’d have Cena lose but because of stoppage than his own quitting, but it won’t happen.

I sure as hell hope this is their best match. If it’s meant to be the end to this specific grudge, it should be. I do think each needs to move on after this match to mix it up a bit. Punk can join forces with Bryan and go with Orton. Bryan can get in the mix with Triple H and Big Show.

If they want to give fans the ultimate payoff, take out the shenanigans and let two of the best wrestlers in your company go for 25 minutes of high intensity, action packed pro wrestling. After all, Daniel Bryan said he was a professional wrestler. Even though I’ve said this three times in a row, Bryan needs to win and this story needs to be complete for now. Maybe Orton kicks out of the flying knee this time, but Bryan small packages him for the win and he and Brie can celebrate.

I know that with Shawn Michaels involved it probably means Triple H will be involved. But hopefully there’s not too much chaos in this one. They can do all the bells and whistles with Ryback and Punk. I want to see a great wrestling match here.