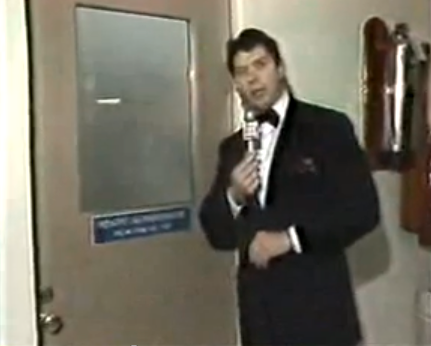 On New Year’s Eve 1985, David Letterman hosted his 3rd Anniversary Late Night special. As part of the show, he did a show-long gag where the first baby born at one of two New York city hospitals would be declared the “Late Night” baby. He had two correspondents reporting from the hospitals and updating the situation throughout the show. Those two correspondents were none other than Bob Costas who at the time was best known for hosting NFL Live 85 on NBC and Vince McMahon who Letterman described as the WWF announcer.

Costas seemed to be in on the gag, but McMahon seemed to be taking it a little too seriously at first. He reported in his bombastic style and Letterman was cracking wise on him during the segments. Near the end, Vince loosened up and was actually quite funny.

I had no idea about this until Costas was on Bill Simmons’ podcast, the BS Report. They talked about the show and how Vince was taking it too seriously.

I asked Dave Meltzer about the segment and what the deal was behind it and the answer was quite simple. He said it was just meant as a rib on Vince. It does seem that Vince figured out how to go on with it later in the show.

The hospital Vince was reporting from delivered a baby during the show, so that baby became the “Late Night” baby. The baby born at Vince’s hospital was named Shawn Michael Fluery. How’s that for a crazy coincidence?

Here’s an edited video of most of Vince’s segments:

If you want to watch the full show, you can seek it out on YouTube, but parts of it might be missing. Costas’ ending line is classic.

Of course, Costas and Vince would be together again on an infamous episode of his old HBO show. We’ll save that for a future post.