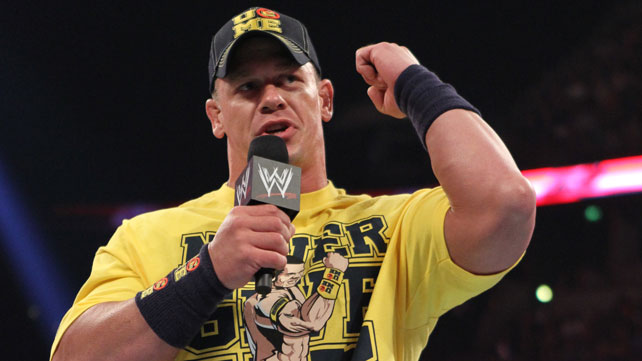 I think it surprised just about every fan when Vickie Guerrero announced that John Cena was returning at Hell In A Cell; at least three months earlier than expected.

It very much looks like John Cena is here to stay and this is not just a hot-shot opportunity to help with ratings and PPV buys for just the next upcoming show. According to Dave Meltzer, he’s scheduled to work a regular schedule from here on out.

Regarding John Cena, his return is not to get injured by Alberto Del Rio and then disappear for several months. He is scheduled to wrestle at all the shows going forward that he is advertised on.

I fully expect John Cena to roll into Hell In A Cell and beat Del Rio in ten minutes. I’m almost sure this is going to happen. Part of the reason for Cena to be back is to be a focal point. And while having him chase Del Rio would be the best usage in my opinion, he’s beaten Del Rio quite easily so many times, I’m not sure how believable it would be.

That being said, here’s how I’d book John Cena’s return from here until Royal Rumble.

Hell In A Cell

From now until Hell In A Cell, Ricardo Rodriguez needs to become Cena’s mascot, similarly to how Horswaggle became the Great Khali’s mascot. If Hornswaggle was in harm’s way, Khali would save him. With RVD out, Rodriguez can start wearing Cena shirts and help Cena troll Del Rio. Cena doesn’t even have to be at Raw. He can do pre-tapes. Right now, Del Rio is so paranoid about having to face Cena, any sight of him should make him flip out. And during his matches, Rodriguez should appear and piss him off even more. However, Del Rio shouldn’t lose anymore. He needs to become more vicious; especially with the arm bar.

At Hell In A Cell, the story should be that Cena is coming back early and his arm is not going to be 100%. Del Rio should target the arm. Cena doesn’t give up, but the match is stopped because he’s in a lot of pain and won’t give up. If they don’t want to beat Cena immediately, have Del Rio bash his arm with a chair and get disqualified.

In the weeks building, Cena and Rodriguez form a bond and even tag team in the go-home show for Survivor Series and beat Del Rio and a partner such as Big E Langston. With the combination of Daniel Bryan/Randy Orton/Triple H/Big Show in some form of a main event, this would allow Cena to be involved in a Survivor Series elimination match where he, Rodriguez and a tag team like the Usos could face Del Rio, Big E (or someone else) and a tag team like the Real Americans. Cena and Rodriguez are the sole survivors with Cena pinning Del Rio.

Cena and Del Rio face off in some form of a no-DQ submission match. You could even make it a no DQ where chairs (the C in TLC) are allowed, to play off the Hell In A Cell finish if there’s a DQ spot in that match. The basis is that Cena’s arm goes out again at some point and he’s fighting off Del Rio’s submission attempt. He reaches the rope, but because it’s a no-DQ, Del Rio doesn’t break it. Then Ricardo turns on Cena by begging the referee to stop the match because Cena’s too tough to submit on his own much like Owen Hart did when Bret Hart faced Bob Backlund. Del Rio wins again.

Finally, Cena and Del Rio face off for one last title match. Cena gets his big win over Del Rio and wins the World strap, elevating it to become even with the WWE Championship, and he can move on to whatever his program will be at WrestleMania.