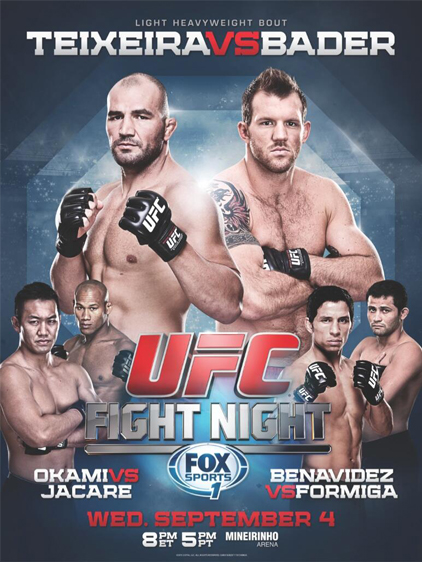 I didn’t plan on blogging this show tonight since I’m on UFC overload, but what the heck.

It’s a card from Brazil meaning tons of Brazilian fighters that you may not have heard from, but at the very least, you’ll get to see Jacare and Glover Teixeira fight tonight.

After this show is the first episode of the new TUF show with Ronda Rousey and Miesha Tate as coaches. We’ll have a recap of that show later tonight as well.

Vinicius was a bit casual with his back up against the fence and Bagautinov unleashed some ridiculous punches that nearly put him out. Bagautinov then tried to sink in a guillotine, but Vinicius got out of it. Vinicius then took his back. Vinicius couldn’t do much, but did get a take down. Bagautinov wins the round.

Bagautinov wants to keep this on the feet as he throws hard and straight punches. And just like that, Vinicius ties him up and Bagautinov goes for a takedown. Vinicius doesn’t look like he has much energy at all. I wonder if he had a bad weight cut.

Vinicius didn’t do much, but walked right into a straight right that put him out. It was right in front of him and his reaction was really slow. He finished him on the ground.

Winner: Bagautinov by way of 3rd round TKO

They both traded top position and made it a fun, albeit very technical grappling around. Natal probably wins the round just based on more time on top.

In the second, Natal blasted Troeng and followed him to the ground with punches. Troeng took the punishment and found his bearings. Troeng continued to scramble, though Natal ended up back on top and in half guard. Both guys have tremendous motors.

Natal sunk in a guillotine and tried to sit back, but Troeng held him up for a bit before going down. Troeng kept coming, but he wasn’t as talented as Natal on the ground and kept getting reversed whenever he had position. Give credit to Troeng for lasting the full round.

Trinaldo was blistering Hallmann with body kicks and round house lefts. Hallmann looked like he was going to go down from body shots, but caught his breath. Trinaldo went for the kill, but Hallmann lasted the round.

Trinaldo came out firing again, but Hallmann held his ground with his back up against the cage. He got a takedown and sunk in a ridiculously tight kimura. It was hurting my shoulder. Hallmann used his leg to push Trinaldo’s head down further, getting the kimura in deeper and got the submission.

Winner: Hallmann by way of 2nd round submission

Benavidez caught him with a left, right, and left knee and Formiga went down. Benavidez finished him on top and it was over quickly. Wow.

Winner: Benavidez by 1st round TKO

Jacare dominated this fight from the start. He dropped Okami with a right hand as Okami was throwing a kick. Okami went down and Jacare threw hard and fast punches on the ground for the finish. That was dominating.

Winner: Souza by way of 1st round TKO

The first half of the round was a bit awkward as Teixeira was looking to defend the takedown while Bader was looking to stay out of harms way. Bader clipped Teixeira who was slightly off-balanced and Bader went in for the kill, only to get dropped with two shots. He was finished on the ground.

Winner: Teixeira by way of 1st round TKO