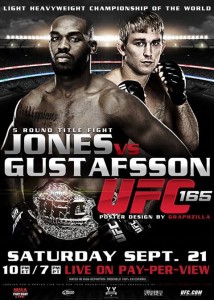 Yesterday, I gave my thoughts on how I think the main event of this show goes. In another era, Alexander Gustafsson would be a nightmare opponent for anyone. But more than likely, not for Bones. I do hope that we get a bit of a barn burner though.

As for the semi-main event, Eddie Wineland gets the most recent chance at Renan Barao who is undefeated under the Zuffa banner. While many aren’t too excited about this card, it kickstarts the most insane stretch of big shows the UFC has ever had. The next three months are going to be action packed.

The first round was a bit sloppy. Nurmagomedov led with lunging uppercuts, some which landed. Healy kept coming forward, but Nurmagomedov fought well backpedaling. Healy continued in his pursuit like a robot even though he took several shots to the face and had a cut. Nurmagomedov went for two takedowns late that probably cinched the round for him.

Healy had a much better round as Nurmagomedov looked to tire. Both guys couldn’t keep the same pace as the first, but they tried. Nurmagomedov came on late with takedowns and a good shot on the ground to take it in a close one.

Nurmagomedov won this round fairly easily. He scored an early takedown and kept Healy down for nearly half the round. Then, he picked him up for a big slam takedown. Healy’s corner was screaming at him to get up and he couldn’t.

Carmont got an early takedown and pretty much handled him on the ground for the entire round. At one point, Philippou tried a shoulder lock from the bottom, but Carmont turned it into a hammer fist. Easy round for Carmont.

This fight is surely not winning fight of the night. Carmont is taking Philippou down easily and just holding him down. Impressive takedowns, but this fight is a snoozer.

Carmont repeated his strategy and just held him down. He had the mount at times and tried to finish him, but he didn’t come close.

Schaub landed a great overhand right. Mitrione landed a couple of inside leg kicks. Schaub busied him with a long combination of punches that may not have landed, he set him up for a takedown and put him down. On the ground, he sunk in a D’Arce and Mitrione went to sleep.

Winner: Brendan Schaub by way of 1st round submission

For about the first four minutes of the round, I thought I was going to give this to Wineland. He was really confident and comfortable. He landed one big right hand that seemed to surprise Barao. But Barao closed strong with several punches and he finally started backing up Wineland. It was like Wineland felt the power.

Out of nowhere, Barao threw the fastest spinning back kick that I’ve ever seen. He rocked Wineland and finished him on the ground.

Winner: Renan Barao by way of 2nd round TKO

Gustafsson is game. Jones used the push kick to just above the knee sort of like one would a jab. Gustafsson landed some solid right hands and a left jab that almost looked like a short hook. Then Gustafsson took Jones down. Jones poked Gustafsson in the eye which stopped the fight for a few seconds. Jones landed a big elbow at the end of the round, but this was Gustfasson’s round.

Jones has been unsuccessful with takedowns so far. Gustafsson is much quicker than I remember. Gustafsson landed a nice left hook solidly, but I have to give the round Jones for landing a head kick and multiple leg kicks. He also landed a nice elbow.

I hate scoring draw rounds, but to me, that was a draw round. Gustafsson was impressive early, hitting Jones with the right hand more than once. Jones came back with kicks and landing an elbow. Gustafsson shot in for another takedown that was stopped. Jones was stuffed as well.

Gustafsson’s boxing is taking over. He’s hitting Jones with both hands and battering the eye that’s cut. Jones had a shot at a takedown and couldn’t get it. If Jones can’t get the takedown, he’s not going to win this fight. Jones has to have trouble seeing. Jones went for successive spinning back elbows and finally caught one. Jones went after him looking for the finish and Gustafsson did a great job just staying on his feet. He caught another elbow and a flying knee. Even though Gustafsson did so well for most of the round, Jones was going for the finish and he has to win that round.

Jones finally got a takedown, but Gustafsson popped back up. Gustafsson looked exhausted, but he was still landing punches. Jones landed several head kicks and Gustafsson looked to be out on his feet. But he hung in there and took the punishment. Jones won the last two rounds on my card here to win the fight. We’ll see what the judges say.