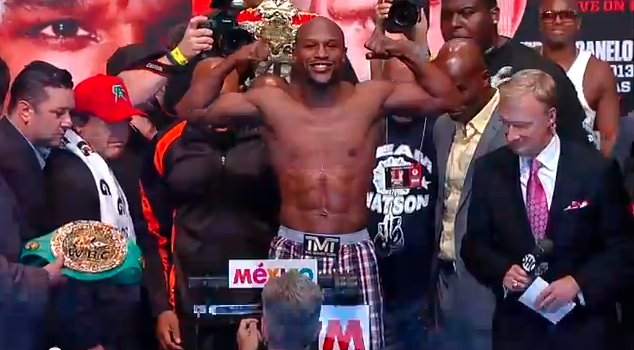 This is THE ONE we’ve been waiting for.

We have some great content up on the website you may want to check out before the fight starts.

Yesterday, Duan and I did an hour podcast all about the fight, previewing the whole thing as well as a look into the future.

We also took a look back at the Floyd Mayweather vs. Oscar De La Hoya fight from six years ago to see if Oscar truly has the blueprint to give to Canelo.

Robert Lashley wrote an excellent piece looking at the fight and giving his prediction.

And if you missed any of the All Access TV, you can watch them on the website.

Danny Garcia beat Lucas Matthysse in a fantastic back and forth fight in the semi-main event.

We’ll be back with the live play by play.

Mayweather Vs. Canelo Play By Play

I saw that Canelo gained 13 pounds since yesterday, putting him at 165 and Mayweather lost 1/2 pound. There will be a 15 pound weight difference tonight.

Canelo’s skeleton is so much thicker. His legs and calves are so much bigger. Mayweather came out the aggressor. Canelo sat back. They had a bit of a feinting contest. Mayweather landed a nice combination, but Canelo landed a nice hook that slightly knocked Mayweather off-balanced. Canelo’s jab looks strong. Mayweather probably wins the round by Mayweathering him.

Mayweather paid for Canelo lunging in and hit him with a sharp one-two. Canelo looked slow in the round. Canelo landed a nice left hook before the end. Mayweather’s up 2-0.

Canelo has a few opportunities, but he’s a tad too slow. He’s landing the jab decently, but most of his other punches are being blocked. Mayweather landed two right hands through Canelo’s guard. It’s Mayweather 3-0, though, none of the rounds have been convincingly yet.

Canelo hit him a bit low and Mayweather over-exaggerated. They were yelling at each other. Mayweather wanted to touch gloves and Canelo didn’t want to. Before that, Canelo rocked his head with a right hand. Canelo is finally landing shots on the inside. Canelo is consistently attacking the body. Mayweather with a nice counter left hook. This was the best round of the fight so far. I’ll give it slightly to Mayweather, but it was close. If Canelo didn’t get hit so flushly in the face, he’d have won the round. Canelo has a mouse under his eye.

This is Canelo’s best round. Canelo landed a nice left hook that made Mayweather smile, so you know it was a good one. He’s landing some stiff jabs as well. He nearly connected with an uppercut. Mayweather connected decently in that round. I wish I could see the punch stats, but I’d slightly give that to Canelo.

Canelo is getting frustrated. He threw a shoulder at Mayweather. But Floyd is staying on the inside and he’s landing, but Canelo is also starting to land. Mayweather didn’t move that much in the round. I think that’s Canelo’s second round.

Mayweather toyed with him against the ropes. He put the jab in front of him just to blur his vision and followed up with nasty right hands. Canelo answered a couple of those, but not enough. That was a clinic right there.

Canelo is clearly frustrated. He had a nice sequence with Mayweather up against the ropes, but Mayweather hit Canelo cleanly pretty much at any time he wanted. I have Mayweather up 6-2.

It’s more of the same. Mayweather has turned this into a bit of a boxing clinic. Canelo is trying to throw power shots, but missing terribly. And it’s just one shot at a time. He needs to be a bully and just move Mayweather, but he’s unable to. Yet another easy round for Money.

Canelo looks to try and goad Mayweather to come toward him with his back against the ropes, but he takes a lot of punches to try and land just one. Mayweather’s accuracy is amazing. Canelo is just a target right now.

The body shots look to be bothering Mayweather, but this isn’t close. Mayweathering may become a word that means tactically and strategically wearing someone down to the bone.

Canelo didn’t feel like chasing Floyd. He didn’t even really throw a crazy amount of punches in the round. Canelo probably wins that round just because Mayweather didn’t do much. I have Mayweather winning the fight 9 rounds to 3.

Whoever had it 114-114 needs their judging license taken away.