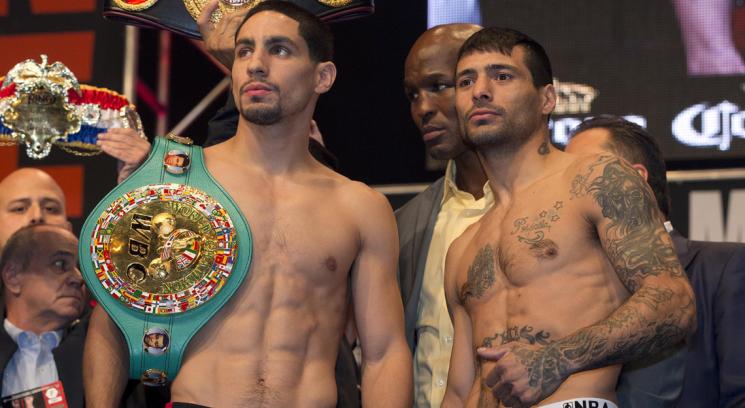 It’s time for the semi-main. It’s Lucas Matthysse’s first shot at a world title. Duan and I both predicted a win for Mattysse on FGB Radio Friday night.

Garcia Vs. Matthysse Play By Play

Solid start to the fight. Matthysse isn’t starting slow. Garcia’s jabbing and moving and throwing straight punches. But Matthysse has landed a few power shots; enough to win round one.

Another strong round, but at this point Matthysse is imposing his will. Garcia is trying to box, but is getting goaded into some bigger exchanges that he’s getting the worse end of.

Better round for Garcia. He even loaded up on a right hand that partially landed. He’s red on his side from Matthysse body shots according to Al Bernstein. I thought it was maybe the ropes. I would slightly give it to Garcia partly because Matthysse didn’t throw as many shots.

Garcia is putting on a great showing. He’s taking great shots and yet he’s starting to lead the exchanges and land the cleaner shots. He also looks to be frustrating Matthysse a bit now. I have the fight split so far.

That was a close round until the end, but it had a low blow and a clashing of the heads. Matthysse buzzed him late before the round ended. It was his best shot in a few rounds. He wins it.

These last two Matthysse rounds are like the first two. He’s imposing his will better and pushing Garcia backward with shots. He’s landing the power shots again.

I think Matthysse wins this round again, though Garcia made it close at the end with a nice combination. Some of these rounds are really close. Matthysse’s right eye is closing.

Great round for Garcia and the tide may be turning. Matthysse seemed to have a problem seeing the left hand coming. Garcia is targeting the right side of Matthysse’s face. I have Matthysse up 5-3, but Garcia’s coming on.

Garcia is in full control and can take this fight by closing out the rest of these rounds. Matthysse is game and he’s still bringing pressure, but the counter shots are landing much more cleanly by Garcia, especially the left hand.

The difference since the cut is that when they are inside, Garcia’s not afraid to let his hands go because he knows Matthysse isn’t as accurate and he’s not as confident letting his hands go. Garcia is comfortable inside throwing hooks.

Matthysse has renewed urgency. He knocked Garcia’s mouthpiece out with a right hand. He’s smothering him. Garcia came back with a nasty combo that ended with a shot to the back of the head which knocked Matthysse woozy. He got caught up in the ropes and went down. Matthysse ended it with a big shot. But this is clearly Garcia’s fight now.

This was a really good round for Garcia. Matthysse was lunging in for shots and Garcia was battering him with counter shots. Garcia landed another low blow and had a point taken away. They both went for it late. I have the round as 9-9.