Two former big stars were back on Raw this week. I couldn’t figure out whether to put Edge or Goldust in the title of this post, but went with Goldust since he actually wrestled the WWE champ tonight.

Daniel Bryan doesn’t get laid out!

For the first time in a long time, the show didn’t end with Daniel Bryan on the losing end of a beat down. It almost did though.

Bryan faced Dean Ambrose as the main event. The Big Show was in his corner and the rest of the Shield was in Ambrose’s corner. It was a fun match that ended abruptly. Stephanie McMahon told Show that he couldn’t touch the Shield. He was the conflicted giant let again.

After the match, Bryan was jumped by the Shield and Orton came out to lay him out again. Triple H and Stephanie came out to tell Show that he had to knock out Bryan, but he hesitated. Orton grabbed Bryan screamed at Show to follow instruction, but he hesitated again again. Orton threw Bryan down to talk to Show. Bryan got up and hit Orton with the flying knee and took the title and did “Yes” chants as the show ended.

It was great to see a fun character from back in the day. As part of the storyline, Goldust faced Randy Orton and if he could beat Orton, his brother Cody could get his job back. 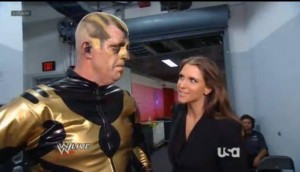 They did a great job with all of the build-up, showing classic packages of his run. As far as the match goes, it was a really good TV match. They did all the hope spots perfectly and for a second, I’m sure people thought Goldust was winning the match. But of course, he didn’t. Still, it was a fun retro character done well.

Stephanie was mean to a crying Goldust in the back, calling him a failure.

Edge is back too!

Well, at least for this one night. Since the show was in Toronto, the crowd reacted to him like he was Daniel Bryan 2013. He cut a great promo which was heavily directed at Triple H.

He brought out Bryan to ask him if could beat Orton. His former tag partner Orton came out and they exchanged barbs. Triple H came out and Edge reminded him that he didn’t think Chris Jericho or John Cena would make it. Triple H said he was right about someone and that was Edge and then went on to lie about Edge’s credentials. Triple H said he couldn’t hurt Edge because of Edge’s neck condition, but he could hurt family and out came Christian dragged out by the Shield. They beat him up backstage.

That was pretty much the end of Edge. He had one backstage statement, but Triple H kicked him out. It would’ve been a nice add to the PPV if he’d have been in Daniel Bryan’s corner at Night Of Champions, but then Bryan would probably have to win and I don’t think he will.

The important parts of the show were really well done. But if your segment wasn’t important, they put very little thought into it.