On a rare non-49ers fall Sunday, I was able to check out a local wrestling promotion called Premier with some friends including our own Cadillac Don, Wrestling Observer’s Dave Meltzer, Tommy Norcal, and Dave’s two good friends. President John LaRocca mentioned that since the 49ers were scheduled to play on Thursday the week before rather than Sunday, they decided to hold the event to take advantage of the open Sunday. The show was held at a small venue in downtown Gilroy called Nine Lives Club. I took my kids to see X Factor group Playback there earlier in January. Let’s just say that the crowds were vastly different.

(My buddy Tommy Walton (@tommynorcal) and another fan were the two hecklers of the night. People thought they came to the show together. Nope, they just improvised that.)

Premier is a breath of fresh wrestling air with a strong mat-based style and lots of submission attempts built around logical wrestling with a UFC flair to it. After each match, the ring announcer interviews the winner who puts his competitor over. The loser of the match is always dejected. And each winner talks about getting closer to getting a shot at Premier champion, 2004 Olympian Jeff Cobb.

Each wrestler has a public win-loss record and winning helps determine the next contender to the title. What? Winning matches in 2013 matter? Don’t tell that to Rob Van Dam.

The entire show was built with the idea of the last three matches being the best contested, longest, and most important. The early matches were fun with the idea of getting the crowd into the show, but not wearing them out. Each of the early wrestlers paced themselves quickly so as to make the match exciting, but not overly long. 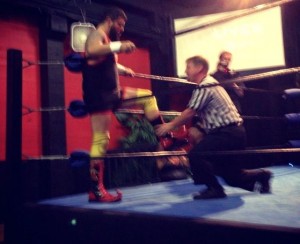 The only real heel on the show was of course, the Almighty Sheik, who faced local San Jose wrestler Marcus Lewis. Sheik even wore the old Iron Sheik boots to fill out the gimmick.

Nick Ruiz and Sledge worked through a couple mixed spots, which were some of the only real slip-ups to the common casual wrestling fan eye. I thought Sledge logically worked through both slip-ups and the match was fine because of it. J.R. Kratos has WWE size and some good athleticism for a big man. He beat Kaimana who wore a bandana to the ring and gave it to a young fan.

The show started to really get into gear with Timothy Thatcher vs. Dylan Drake. Thatcher is “The British Messiah” and had to overcome Drake working his right leg the entire match. Thatcher is a submission wrestler and looked for the submission whenever he had the opportunity, much like a jiu-jitsu fighter would. After a bad-ass ending sequence, Thatcher quickly locked in an arm bar to get Drake to tap. It was a small thing that most might not have cared about, but after the match, Thatcher made sure to do his interview near the ropes so he could hold onto the top rope and continue selling his knee.

The last two matches were excellent. Former champion Dave Dutra, who looks a little bit like The Miz (but wrestles very much unlike him) faced Oliver John. The entire idea of the match was to set up the next contender. Since Dutra was the last champion, a win for John would logically place him in line. If Dutra won, he would get his rematch. Both guys chopped the crap out of each other, leaving Dutra with some ugly bruises near his collarbone. He said afterward that they would scab up in two days, but his wife wouldn’t be happy about it. John is a 14-year veteran according to the Premier website and Meltzer mentioned that he works in Mexico once a month for El Hijo Del Santo. John was impressive in victory.

That left the main event, which featured a lot of mat wrestling early on. Brian Tannen is a huge guy at 6’2 and 275 (according to the website) so it was a good visual with the shorter, but powerfully built Cobb. Cobb’s nickname is “Mr. Athletic” and it showed. Meltzer tweeted out last night that Cobb was “an unreal powerhouse when it comes to functional man on man strength, like a Cesaro.” You mean the man of the giant swing? 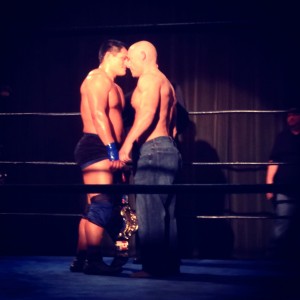 Cobb used a delayed vertical suplex, a standing shooting star press (he beat Dutra for the title with a shooting star from the top rope in the summer), and his finisher was a spinning slam in which he went against his own momentum. It’s pretty hard to describe and I couldn’t find any video of it online. It was hugely impressive and popped the crowd.

Cobb retained and will face Oliver John at the next show in Gilroy on December 15. They faced off in the ring at the end of the night.

All in all, everyone seemed very happy with the show. The wrestling was really good and the show was paced excellently. It was just over 2 hours long when it was all said and done. I would highly recommend checking it out if you are in the Bay Area.

I did get a chance to chat with Cobb after the show and asked him about the pro wrestling seminar he attended in San Jose two weeks prior. Konnan was there to evaluate talent. Cobb said Konnan gave him some feedback and when it’s someone who has been a star in wrestling for as long as Konnan has, you just listen and do what he says. I asked him if he thought he could do his finisher to someone bigger than Tannen, like maybe J.R. Kratos. With a bit of a wink and a smile, he said that if Kratos moves up the ladder, then we’ll see.

I found a list of Cobb’s moves on YouTube. To see why they call him Mr. Athletic, check it out.