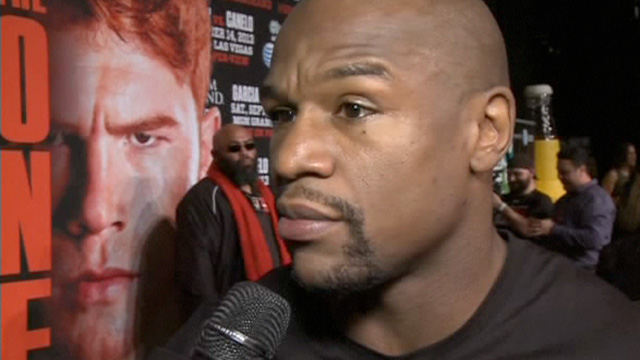 After dismantling Canelo Alvarez, Floyd Mayweather said he would fight again in May of 2014. After racking my brain trying to find a possible opponent for him, I came up with five possibilities. You can vote on which of the five possibilities you think he should fight on the right.

Who should be Mayweather’s next opponent?

Sergio Martinez: There were inklings in 2012 that Sergio Martinez could be a possible opponent for Floyd. At the post fight press conference for Mayweather vs. Canelo, Richard Schaefer mentioned that Floyd could fight someone at 147, 154, and even 160. Now, I wouldn’t expect Floyd to fight Sergio at 160. He’d force Sergio to come down as far as humanly possible. But I’m sure it’s an idea.

Winner of Juan Manuel Marquez vs. Timothy Bradley: Marquez faced Mayweather in a forgettable encounter in 2009 in which I felt that Mayweather won every round. But after beating Pacquiao the way that he did and if he follows it up with a great performance against Timothy Bradley, might this harder hitting version of Marquez be interesting? And what about if Bradley can beat Marquez? Beating Marquez would give him a win over a legend (no one believes he really beat Pacquiao) and could catapult him into someone serviceable for Floyd.

Manny Pacquiao: I personally think this is only a possibility if Manny wants one last big payday before he retires and would be willing to possibly distance himself from Bob Arum to do it. But if Pacquiao beats Brandon Rios impressively, I could see the hype machine starting for this one again simply because there’s no logical next contender.

Amir Khan: I added Khan here because he’s a Golden Boy guy and there was talk of him being one of Floyd’s six fights when Floyd signed the deal with Showtime. His rumored next opponent, Devon Alexander was also in the same mix. Khan’s more marketable, especially internationally but he hasn’t looked good in a while. And, he lost to Garcia, so he might have to win a fight or two before being considered.

So who do you think Mayweather should fight next? Did I miss anyone? If so, add your pick in the comment section.

2 thoughts on “Poll – Who Do You Want To See Floyd Mayweather Fight In May?”