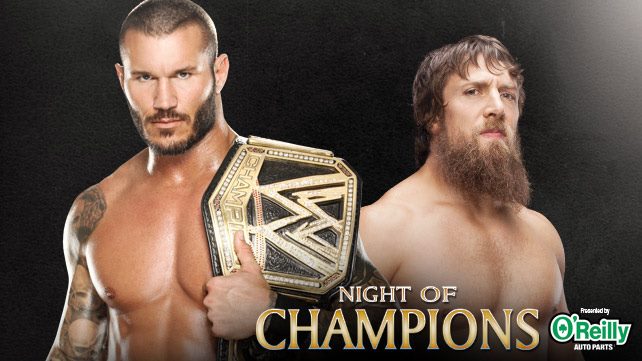 The match between CM Punk, Curtis Axel, and Paul Heyman is all about Punk getting his hands on Heyman. I don’t expect it will be one of the best matches of Punk’s career.

Here’s the Night Of Champions preview:

The Prime Time Players vs. Tons of Funk vs. The Usos vs. 3MB vs. The Real Americans

This match was just announced on Monday. It looks like it’s a gauntlet match which means there will be two teams in the ring until a team is eliminated and then the next team will come in.

Because The Shield are heels, a babyface has to win this one. I expect either The Usos or The PTP’ers to win this one. The Usos and Shield could have an excellent match, but I imagine The PTP’ers win this one as they’ve been booked more strongly of late since Darren Young came out during Survivor Series weekend. However, the Usos did a short angle with Dolph against the Shield on Smackdown and that could also be the way to go.

AJ Lee vs. Natalya vs. Brie Bella vs. Naomi

They’ve moved AJ from Dolph and Big E and she now has the Total Divas crew in her sights. I don’t think AJ loses the belt just yet, but I think this feud may be long-term because of Total Divas was picked up for more episodes.

I think the smart thing would be to have AJ pin Naomi, setting up a possible longer feud with Natalya who would be the best beat to have a run with the Divas title coming off the TV show.

(A Dolph Ziggler vs. Dean Ambrose match was rumored, but I haven’t seen if it’s been made official or not. They wrestled on Smackdown and it was then turned into a six-man as the Usos and the Shield interfered. If they do have a match, I see Ambrose winning after interference.)

Wikipedia lists it as a handicap elimination match officially. Based on the booking, I thought that Punk would pin Axel and get time in the ring with Heyman, but this makes sense as well.

The entire thing is about Punk getting his hands on Heyman. The mystery here is if someone else shows up as the next Paul Heyman guy. Because of how they’ve booked Axel, it doesn’t seem that there’s a future with Punk. Big E hasn’t been around lately, so maybe he could be the guy. He’s athletic enough to do great things with Punk. That’s my hope.

I guess they could hold off the Heyman beating, but I think the best way to do this is to have Punk beat Axel and just as he’s about to beat up Heyman, he gets jumped by someone else.

At one point, this had a chance to be a show stealer, but with most of the importance placed on the WWE title match, this one has kind of been pushed aside. Plus, we’ve already seen it a few times.

And wow, RVD came in and was treated like a star. And then recently, he’s been treated terribly.

I think they can have a pretty decent, though sloppy match, and I fully expect Del Rio to win. Maybe Ricardo turns on RVD officially and is back with Del Rio. He needs him.

The only intrigue here is how they can keep Daniel Bryan over in losing. One would imagine that Orton needs to keep the belt for a few more months to keep this program going, unless they want Bryan to hold the belt only to lose it again soon. I don’t know that it’s the best idea.

I could see the Big Show getting involved, disqualifying Bryan (maybe even not on purpose) right before he has Orton for the pin, or something of that nature. Let’s just hope they don’t repeat Montreal.

I fully expect Bryan and Orton to have a great match, but also that Orton will prevail. They need to continue put heat on the angle, but do so in a way that the crowd still feels Bryan is the guy to eventually win the title.