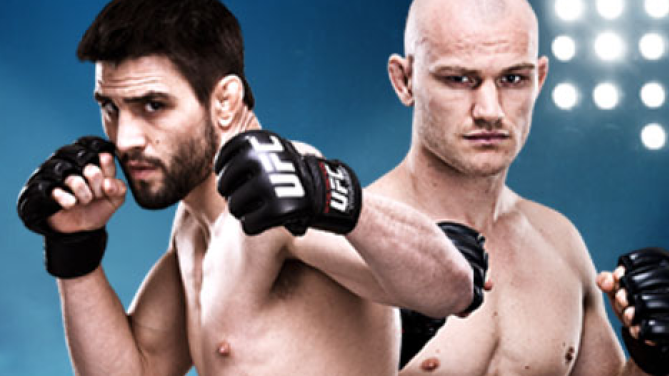 It’s the second UFC Fight Night on Fox Sports 1 and while it doesn’t have the same near PPV worthy card, there’s still a really good main event and other exciting fighters on the undercard. Not bad for your midweek UFC card.

Let’s get started with the Condit vs. Kampmann 2 play by play.

Tavares started out with some very loud leg kicks. McDaniel tried to work the ground game, but Tavares was strong in the clinch. Tavares nearly connected on a head kick that may have ended McDaniel. But he wins the round for controlling with leg kicks and the overall striking.

Tavares landed a nice left hook that wobbled McDaniel. McDaniel’s balance in the standup is off. He’s getting knocked off-balanced by short punches and simply being less quick than Tavares to the punch. Some of that looks like it has to do with the leg kicks taking its toll on him.

McDaniel landed a nasty short left hook which sent Tavares reeling against the cage. McDaniel took an accidental shot to the balls for his trouble. McDaniel got him down, while Tavares was working McDaniel’s arm off his back. McDaniel is working hard on the ground to advance, but Tavares is tying him up a bit and holding his own on his back. McDaniel won the round, but lost the first two. Tavares should win the decision.

Both guys came out slugging. In a sense, they were like mirrors of each other. Perez wanted to throw the flying knee, but Mizugaki made him pay with a short right hand both times. Mizugaki got the better of the standup slightly, but Perez got a nice takedown and controlled Mizugaki on the ground. Back on their feet, Mizugaki took Perez down and went for his back. It was very much a stalemate of a round.

Mizugaki’s punches were shorter and crisper and that was the difference in the round. Perez tried to land more haymaker-like blows and then would look for the takedown. Mizugaki would counter him with clean shots.

Mizugaki had a rear naked that Perez escaped when he tried to reset the choke. The slugged it out otherwise, which to me, puts the fight squarely in Mizugaki’s hands.

Both guys are former TUF winners; Whittaker from the Smashes show and McGee from the show coached by Chuck and Tito.

Whittaker landed some solid straight lefts and caught McGee with a counter left hook that dropped him. McGee was active, but by the looks of it, Whittaker landed the better shots.

Second round was much better for McGee. His constant punching eventually wore down Whittaker and McGee landed two clean shots that were the best of the fight. Both fighters are using quick elbow strikes. Whittaker was using his as both a jab and a follow up shot. Even though Whittaker came back late, I have it at one round apiece and the third should decide it.

Melancon had quick hands. His right hand came out like a cannon. Gastelum quickly got a takedown and nearly had a second, but Melancon fought the second one from his knees. Gastelum caught him with two quick shots, then an uppercut and Melancon went down. Gastelum jumped onto his back for the rear naked choke and submission.

Winner: Kelvin Gastelum by way of 1st round submission

Dos Anjos dropped Cerrone and Cerrone instintively went for the triangle off his back but wasn’t close. Dos Anjos controlled him from the top position for the second half of the round.

Dos Anjos won the second round too, but it was a lot closer. Cerrone got a takedown, but again, spent a lot of the round on his back. Not much of a sense of urgency from Cerrone, but he has a third round to get it together.

Kampmann scored three takedowns, which gave him the round. Condit tried to throw some kicks, but nothing landed and it gave Kampmann the opportunity to take him down.

Damn good round for Condit that could be 10-8. He landed anything and everything and Kampmann’s face was a bloody mess. Near the end of the round, Condit tried for a standing choke that turned into a rear naked choke, and Kampmann got out of it, but ended up being mounted by Condit. He quickly turned to his stomach and turtled and stayed out of harms way.

Condit ended it. It started with a left hook that buckled him and then it was a barrage of hooks and straight punches to the head followed by two knees that put him down.

Winner: Carlos Condit by way of 4th round TKO