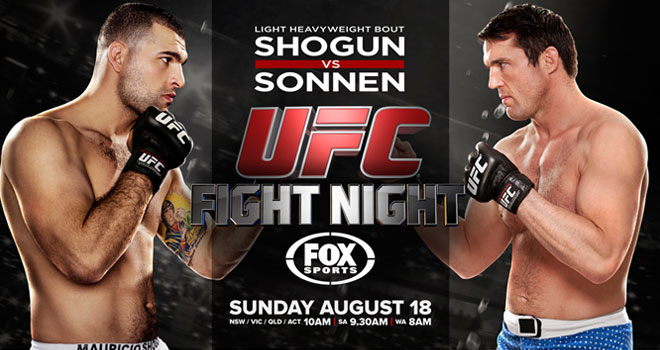 This is the UFC’s first show on the new Fox Sports 1 network. It’s a very important show for them as this show sets the tone for how many people are going to watch programming, countdown shows and the like.

Excellent round by Johnson. Early, he was just peppering Lauzon, but he starting putting some heat behind them and put Lauzon down more than once. Lauzon is sitting right in the pocket, looking for takedown and getting hammered. Johnson is so focused, the referee warned him for not listening and nearly pushing him off to get at Lauzon.

Lauzon’s standup was much better in the round, but he still ended up taking the worst of the fight standing. Johnson’s power looks to come when he loads up and not necessarily on every punch. Lauzon landed some straight punches, but he couldn’t get the takedown. Johnson secured a takedown late in the round.

Lauzon took a vicious beating in the third round. His face looks like a swollen mess. Johnson wasn’t in any sort of trouble at all in the third round, leading all the exchanges, landing multiple punches in combinations, and stuffing takedowns. He also scored a big takedown of his own late. It’s his fight all the way.

Hall got the takedown right when the round started. He landed more shots than Howard as his hand speed is quicker. He also threw a nice knee when Howard tried to step in to close the distance. Howard landed some loud leg kicks. It’s Hall’s round.

The second round was close and Howard may have taken it in the end. I still might’ve given it to Hall. Hall is smartly staying away from Howard’s power. Every time they get into an exchange, Hall is out before Howard can load up. There was a fun exchange while both guys were on the ground. Hall had a kimura attempt and Howard went to his back to roll out of it. Hall spun into getting his back, but it didn’t go anywhere.

John Howard may win this decision. He made the third round very ugly and Hall got tired. Hall got a takedown with less than a minute left in the round. Howard missed a front wheel kick and Howard nearly landed a jumping superman-like punch to the ground. Howard ended up on top.

(It was a weird fight in that both guys had tons of respect for each other and it slowed some things down. Lots of smiling and hand touching throughout, including with less than 30 seconds left.)

That was fast. As my FGB Radio co-host put it, this was for the UFC TV title since Matt Brown has been on Fox so often. Well, Matt Brown defended his ficticious TV title. Brown knocked him down and pounded him out cold on the ground before Pyle was able to do anything.

Winner: Matt Brown by way of 1st round TKO

Crazy start to the fight – Faber was judo flipped onto his back immediately and Alcantara got the mount. Faber did a good job of defensive positioning, but his back was nearly taken. He had to fight off Alcantara for half the round. Faber finally got out and picked him up for a big takedown but almost fell into a triangle. Faber was throwing nasty elbows from Alcantara’s guard. Some were landed clean. Some weren’t. Great round. I’d go 10-10.

This round was all Faber. Faber got him down and was raining down with more elbows. He was trying to set up the guillotine, but couldn’t get it. Alcantara tried to throw Faber, but Faber reversed it and Alcantara was on his back again taking elbow after elbow.

More of the same from Faber – on top of Alcantara and keeping him where he wants him to be, landing elbows. Alcantara wasn’t all that competitive in the round, which made it a slow round. Alcantara tried to free up Faber’s arm for a submission late, but Faber was too strong. I have it 30-28 for Faber.

It was a fairly sloppy first round, but Reem got to him early with a body shot and Browne just covered up. Reem was throwing body shots and knees and even landed some illegal shots. Browne waited him out and shook it all off. Reem was tired and he came in face first, ate a front kick, went to the ground and was finished with a punch. Wow.

Chael Sonnen got a super quick takedown, but Rua got a takedown of his own surprisingly. Sonnen got a second takedown and Shogun couldn’t do anything underneath. Chael was strong on top. Back on their feet, Sonnen sunk in a standing guillotine and pulled guard. Shogun didn’t panic, but tapped anyway.

Winner: Chael Sonnen by way of 1st round submission