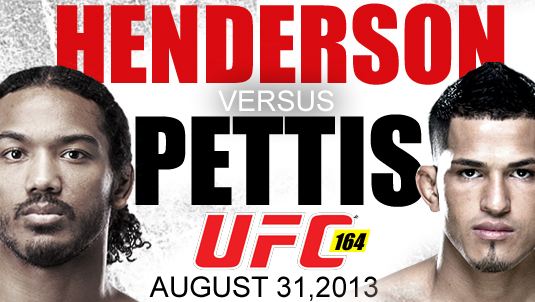 It’s the rematch to the last WEC fight and a rematch to one of the best title fights in recent MMA history. Will Benson Henderson continue to win close fights and establish himself as one of the best championship rounds fighter? Or is it Anthony Pettis’ time?

Poirier got Koch down quickly, but put himself right into a triangle attempt. Koch didn’t look to have it, but eventually did sync it in. It was comical as Poirier tried to manuever out of it and couldn’t. It was like a cat trying to chase its tail. Koch ate a nasty right hook out of a clinch and it looked over. He couldn’t finish him with punches so tried an arm triangle, but Koch hung on. Has to be close to a 10-8 for Poirier.

Koch didn’t take as much crazy damage as he did in the first, but he didn’t win the round. Poirier had him quickly mounted again and landed heavy shots that were unprotected as Koch’s hands were tied up. Koch has nothing for him tonight so far.

Koch fought a valiant third round. He eventually got Poirier’s back but couldn’t sink in the choke. Poirier outlasted him, but man, Koch was game after taking some nasty shots. Great win for Poirier, but great grit from Koch.

Vera was smart to circle both left and right and Rothwell was always coming toward him. Vera landed some really nice kicks to the body and Rothwell stepped right into a quick left hand that seemed to wobble him. Rothwell landed a few decent shots of his own, but could never follow up with them as Vera was out of there before he could.

It was a lot more circling by Vera. But he might be getting tired as Rothwell had better luck catching him both with kicks, including a nice one to the head, and short punches on the inside. Vera wasn’t able to land as easily as in the first round. I have the fight split so far.

Rothwell caught him up against the cage and blasted him with shots. Vera went down and couldn’t defend himself and it was stopped.

Winner: Ben Rothwell by way of 3rd round TKO

It was a very fast pace, which should’ve been advantage Guida, but really wasn’t. Mendes stayed with him the entire time, shot for shot, and worked on a guillotine at one point and got a strong man takedown near the end. Guida’s offense consisted of trying to land wild overhand rights that looked like dodgeball throws. He hasn’t come close yet.

Mendes is just too good of an athlete for Guida’s quirks to work on. He’s ahead of Guida at every step. When he gets Guida down, he goes for his back, but Guida’s out of there. It was another round for Mendes.

Mendes dropped Guida. And then it cracked him against the cage. Guida went down and turned over and it was stopped. Kind of unbelievable to see Guida go down and a great performance by Mendes.

Winner: Chad Mendes by way of 3rd round TKO

Barnett took it to him the entire round. He didn’t let up and had Mir against the cage. He had Mir’s hands situated to where he was wide open for a knee and Barnett blasted him in the forehead with it. Mir dropped fast and it was waved off. The fight was probably stopped early, but Barnett was about to follow up with punches.

Winner: Josh Barnett by way of 1st round TKO

Henderson started off quickly, not allowing him to get any distance. He pushed him up against the cage and held him there. Pettis couldn’t to anything but hold ground against the cage. Back in the center, Pettis blistered him with right leg kicks to the body before trying a fancier kick and getting put on his back. Henderson was in his guard and left his arm out there. Pettis quickly grabbed an arm bar and had it deep. Henderson tried turning it over, but had to verbally tap.

Winner: Anthony Pettis by way of 1st round submission