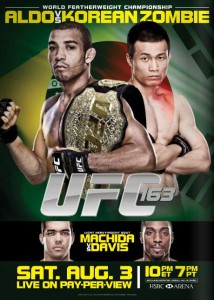 None of us give the Korean Zombie much of a chance at all. We’ll see if we’re wrong.

UFC 163 comes from Brazil which means at least one Brazilian fighter in each of the main card fights.

On the undercard, the second fight from the top features Phil Davis vs. Lyoto Machida, which seems like a bad styles mix if you’re interested in an exciting fight. Davis will have to cut the cage off, but Machida has so much movement that it might be hard.

Maria caught Lineker with the best shots of the round. However, Lineker did come back late in the round and looks to be the better fighter. Maria throws weird kicks and is a little scattered around the octagon. Maria won the round, but Lineker looked confident.

Maria went down after a kick attempt and Lineker followed up on the ground and stopped him.

Winner: John Lineker by way of 2nd round TKO

Leites is back after four years.

Leites had Watson’s back while sitting for much of the round. He tried for the rear naked choke, but didn’t get it cleanly. The more devastating damage was do to punches to the side of the head. Watson came back late to score on a nice right hand.

Leites controlled Watson on the ground again. Had an arm bar attempt that Watson got out of. When it was on the feet and in the clinch, Watson was clearly winning the back and forth. But he’s probably also down 2-0. Leites does look worse for the ware.

It was actually Watson who was worse for wear. Leites fought a smart third round, tiring Watson by getting him down and making him work from the bottom to get up. He had an arm triangle late, but it wasn’t deep. Watson was too tired to fight it. He just waited it out and the bell sounded.

That was fast. Ferreira caught him with a nasty left hand over the top. He rolled into a guillotine and it was quickly over. He looks like a baby Vitor Belfort.

The round wasn’t all that active until the last couple minutes. Machida landed a nice high kick. He then caught Davis who was backpedaling. Luckily for Davis, Machida missed a knee that could’ve ended it. Davis got a takedown at the end of the round. Machida’s round.

The round was much like the first. It was pretty inactive until the last two minutes or so. Machida stuffed two takedowns. He landed the cleanest shot which was a straight right hand. Davis got a takedown late and landed a nice knee. I have Machida up 2-0.

Nice cat and mouse game in the third – Davis went for takedown after takedown and Machida kept stuffing and wriggling his way out of them. He also landed the cleanest shots in the round. The first two rounds were close, but this one was easily Machida’s.

Aldo’s boxing looks excellent. He has a nice, stiff, quick jab working when he wants to throw it and a lightning quick right hand. Jung was more defensive than offensive in the round. He looked worried about the leg kicks. Easy round for Aldo.

Jung continues to box with Aldo which is bad news for him. He swung, missed, and was out of balance and nearly dropped by a jab. Aldo got a takedown and nearly landed in mount. Jung spent the last minute of the round on his back.

This isn’t the fight that I expected it to be. Jung is fighting defensive and when he tries an offensive move, like a flying knee, he ends up on his back. They fought up against the cage, but didn’t really do anything and had to be restarted. Jung had Aldo on his back late with a takedown that came off a missed flying knee.

Unfortunate for Jung that his shoulder looked to separate after throwing a punch. Aldo went after the shoulder and pounded him out while Jung tried to protect himself.

Winner: Jose Aldo by way of 4th round TKO