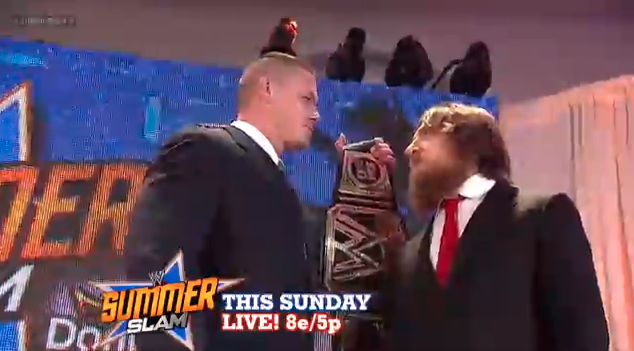 As I said in my summary of Monday’s go-home edition of Raw, this is entirely a two match show. It’s so much a two-match show that without the help of WWE’s website and Wikipedia I wouldn’t have known more than four or five of the matches. And I watch and write about Raw every week.

However, those two matches are big matches. CM Punk vs. Brock Lesnar started hot and didn’t end as hot when it came to the build-up, but it still feels like a big deal. And after Monday’s promo war between John Cena and Daniel Bryan, it went nuclear hot too.

Here’s the preview to the show:

I’m quite bothered that this is on the pre-show rather than the main card, but I guess as long as I watch the pre-show, it shouldn’t matter.

Since RVD pinned Ambrose according to the Smackdown spoilers that I read, I imagine Ambrose keeps the title. I can imagine the Shield interfering and causing RVD to lose and prompting Mark Henry and the Big Show to come out and even up the sides.

I’m actually quite surprised that Henry and Show aren’t facing the remaining Shield members for the tag straps, but maybe they’ll add the match before it’s all said and done.

Prediction: Dean Ambrose by pin fall after The Shield interferes

This is such a nothing match and only on this show because of the success of Total Divas. I don’t imagine Brie loses as the show is built around the twins even though Natalya is the only character so far who comes off as a real person.

Dolph Ziggler and Kaitlyn vs. Big E and AJ Lee

While I’d rather see Dolph vs. Big E in a singles, I don’t mind the mix tag because Kaitlyn and AJ can both go. Everyone can hit their big spots and maybe Kaitlyn can get a little retribution for how AJ has treated her. I think Dolph helps her get AJ back and she spears AJ out of her boots for the pin. And really, there are few who take that spear better than AJ.

While previous Inferno matches have been decided when someone is set on fire, this one looks to be determined by pin fall or submission.

While I’m not sure when See No Evil 2 starts shooting, if Kane is going to be gone immediately, the Wyatts should put him out of action. I have a feeling we’re going to see a Shield style beat down with the family helping Bray hit the downward spiral to win.

I don’t imagine anyone will catch on fire, or else they wouldn’t have changed the rules. I would love to see some foreshadowing to the Undertaker coming back to get revenge for his little brother if that’s where they are going for WrestleMania. We just need to see some lightning or hear the music.

Prediction: Bray Wyatt by pin fall after a Wyatt family beat down

This program is as cold as ice and I think it’s because of Rhodes’ character. The mustache doesn’t work and neither does his a-hole’ish behavior. WWE has a real problem writing for babyfaces these days. Many of them, like Cody, come off as major dicks.

I think this match should go to Sandow. He has the briefcase and needs to be pushed much better if he’s going to have a title match at some point. However, while beating Cody by pin fall wouldn’t be the worst thing in the world, having him get DQd by hitting Sandow with the briefcase is how I would do it.

This is one of the more odd builds I’ve seen and it’s no wonder that there’s no heat for the actual match. For one, we’ve seen it a couple times already and Christian has beaten him. Secondly, RVD also beat Del Rio on TV (and RVD isn’t anywhere near the match). And Christian gets very little interview time. It’s as if they figured they could promote this match solely on Smackdown.

The match itself should be very good. I don’t think Christian is winning the title (unless WWE wants to screw with the Reddit bettor). Instead, Del Rio should be booked strongly here. We’ve already seen a small mean streak in the way he beat up Ricardo. Then again, maybe Ricardo coming back helps Christian win.

I’d have Del Rio injure Christian’s arm early and work it the entire match and finally have Christian submit to the arm bar.

The Best vs. The Beast

When it comes to logical booking, CM Punk should win this match. It seems as if Brock Lesnar will be gone maybe even until WrestleMania unless his deal allows him to show up on more Raw shows. So if Punk is the guy sticking around, he should win right?

I think in most cases, that is true. However, in this case, I don’t think Lesnar should lose. In fact, I don’t think he should ever lose on WWE TV again. If Lesnar is a draw, he needs to be kept strong – stronger than anyone on the roster. Because of his character, he should seem indestructible.

The way I think this should go is that CM Punk is dominated for most of the match, but there are many hope spots, including him at one point hitting the GTS near the finish. But the focal point of the match should be Brock continuing to work on Punk’s arm with the kimura. I don’t think Punk should tap out. He should pass out. And in the end, Lesnar should beat on him more. Maybe Cena comes out for the save. Maybe Orton. Maybe a lot of the locker room.

It’s pretty clear to me that both Vince McMahon and Triple H are going to play into the finish. Based on the Smackdown spoilers, Vince will try to make sure Bryan loses, even though he doesn’t like Cena much either. Would be an interesting chance for a heel turn by John Cena here, but it won’t happen.

But Triple H is going to make sure Vince doesn’t get too involved, giving Bryan a chance to win, which I think he will. I imagine the finish will be overbooked with Cena hitting his finisher and putting him in the STFU. Now, if Bryan could turn the Attitude Adjustment or the STFU into a small package, I think that would be a tremendous finish.

After the match, Randy Orton should come down to cash his briefcase, Vince should kick Bryan low, and Orton should hit the RKO for the finish. Vince should then say that while Daniel Bryan isn’t the champ he wanted, Orton is.

Prediction: Daniel Bryan by pin fall but Randy Orton cashes in his Money In The Bank and wins the WWE Championship