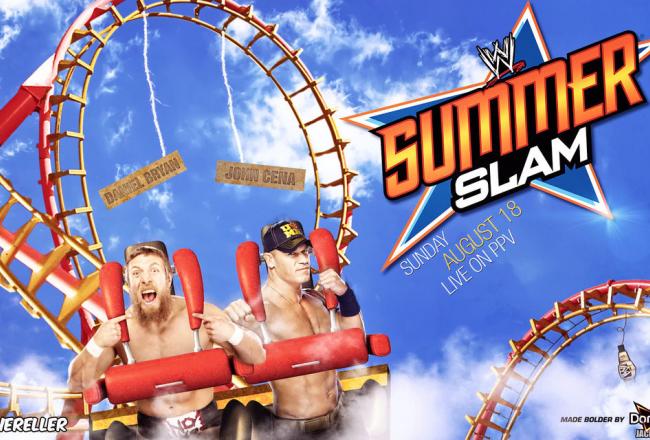 It’s WWE’s biggest show of the summer. As we’ve said for the last week of previews and podcasts, it’s a two match show. If the two main event matches deliver, the show should be good. But I hope there’s a match on what looks like a lacking undercard, that stands out big-time.

This is the pre-show match.

RVD was on the top rope, ready to give him the 5 star frog splash and the Shield came down to ringside. Then, Mark Henry and the Big Show came down. RVD hung Ambrose over the dasher boards on the outside and jumped from the apron and hit a flying wheel kick.

RVD hit the 5 star and the Shield ran in for the DQ. Big Show and Mark Henry were too slow. No word on whether there’s going to be a tag match for the titles later in the show.

The Miz came out to announce the top two matches as if anyone in the arena didn’t know what they were. Fandango and Summer Rae came out so Miz could do his “Really?” gimmick.

JoJo from Total Divas performed a very slow and dramatic version of the National Anthem.

The match looked cool as they dimmed the lights and every thirty seconds or so, the flames, which were ongoing, shot up as high as the third rope.

They propped Kane on the ring steps and hit him with the other ring steps in the head in front of Bray who was on his rocking chair. Then they carried him out.

The match was okay for a spectacle, but it was slow and the fans didn’t really react to it. The Wyatt’s got the silent treatment at the end of the angle, but it may have worked in a creepy way.

Cody Rhodes is sans mustache. They couldn’t have done a mustache vs. beard match?

Cody won fairly quickly. He hit both the Disaster Kick and the Cross Rhodes for the victory. Good action, though way too short.

Del Rio has a black eye. Maybe Ricardo got him back.

Christian started off quickly and was a step ahead of Del Rio all match long. Del Rio even had a bloody nose. Christian hit a Missile Drop Kick for a two count. He went to the top with his back turned and Del Rio hit the Back Cracker which was sweet.

That was a really good match. Del Rio cut a pro-Mexican promo that didn’t quite turn him babyface.

The Miz interviewed Maria Menunos who along with Natalya beat Brie Bella and Eva Marie at Axxess. Fandango and Summer Rae came out to dance again and Miz and Maria showed them up with some dancing on their own.

The match wasn’t bad. Natalya did a great job both selling Brie’s terrible submission hold and also some of the knees and other things Brie was doing that looked stiff.

The story was that Brie worked the arm and Natalya was continually working for the Sharpshooter, which she finally got in the end and Brie tapped.

This is a brutal match, like the Brock vs. Cena match. Brock threw Punk around all over the place. He tossed him overhead belly to belly on the outside. He took one of the table covers, draped it over Punk and jumped on it and broke it over his back.

Punk fought out of the bear hug with an elbow right to Brock’s forehead. Punk came off the top and Brock caught him and hit the old Razor Ramon fallaway slam that was actually a Headshrinkers’ move first.

Punk bit Lesnar’s ear. It’s no DQ. Mike Tyson must be Punk’s favorite boxer. Punk hit a flying knee off the top rope that looked to hit Brock square in the face. Punk hit the knee in the corner twice. Lesnar caught him the third time and tried to get him in the F5. Punk slipped out and kicked him in the head. Punk tried the elbow from the top, but it looked like more of a big splash. Brock’s giving him a ton of offense. Punk tried to hit him with the GTS, but Brock got out of it. He ate another kick. Punk got him up again and Brock turned it into a kimura. Punk turned it into an arm bar and then a triangle. Brock got out of it twice with power bombs. Too bad they didn’t find a way to do a knee bar spot.

Brock pulled out the Three Amigos suplex and popped an “Eddie!” chant. Brock grabbed a chair and Punk jumped on him off the top, but Brock put the chair up. Punk got the chair and nailed him twice. Brock got the chair but Punk low blowed him. Punk hit an elbow off the top with the chair. This is brutal.

Brock tried for the F5, but Punk grabbed onto Heyman who stopped him from hitting him with a chair. Punk hit the GTS but Brock kicked out. Brock went for the F5, but Punk turned it into a DDT for another two count. Punk put him in the Anaconda Vice, but Paul interfered. Punk punched Heyman right in the face and put him in the Anaconda Vice. Lesnar hit Punk in the back with a chair three times in a row. Then, he hit the F5 right on the chair for the pin. Fantastic match.

Punk got a nice reaction as he left. Well deserved.

7. Dolph Ziggler and Kaitlyn vs. Big E and AJ Lee

I have to admit that it was hard to settle down for this one after the Lesnar vs. Punk match. The finish saw AJ grab Ziggler’s leg from the outside and Big E hit a big clothesline. Kaitlyn hit a nasty spear on AJ on the outside. But Ziggler hit the Zig Zag for the finish and pin.

Great reaction for Bryan; lots of boos for Cena.

Cena went outside to whisper something to the ringside doctor. Angle alert!

Slow start early on. Lots of focus on Cena’s elbow. Cena made the match slow with a series of side headlocks. Match started to pick up with Bryan’s kicks in the corner. Cena hit the two shoulder blocks to boos. He went for the fist drop and Bryan kicked him in the head. But he hit it after.

Cena’s trying to keep up with Bryan, but he’s a bit clumsy. He took the double legged drop kick from the top rope awkwardly. Bryan locked in the Yes! lock, but Cena got out of it. He locked it back in and Cena got out of it, but Bryan put him in the guillotine and dropped to his back like Chael Sonnen.

Cena hit the FU for a nearfall. The crowd is really going nuts for Bryan. Bryan got stuck in the tree of woe and did a sit up and got to the top rope and hit the headbutt. He tried to hit do the suicide dive, but Cena hit him with an elbow before he dove. Cena then hit a sweet leg drop from the top for a nearfall. Cena had Bryan on the top for the FU, but Bryan got out and was going to turn it into a hurricanrana, but Cena caught him and nearly pile drove him from the top. We almost lost Daniel Bryan. Cena jumped down and put in the STFU, but Bryan rolled out and Cena put on something that looked like a headlock choke. Bryan got out and put Cena back into the Yes! lock.

Bryan hit two drop kicks into the corner and then Cena clotheslined him out of his shoes. Back on their feet, they started slapping each other in the face. Bryan turned an FU into a DDT. Bryan went to the top, Cena caught him and went for the FU and Bryan turned it into a small package for a near fall. Bryan then set up in the corner and hit a huge knee on Cena for the pin.

Cena shook his hand and Triple H’s. Triple H raised Bryan’s hand. It was the longest celebration of all time.

Out comes Randy Orton. He turns around and goes back. Triple H pedigrees Bryan and Orton cashes in.

Orton comes in to cash in the title and simply pins Bryan to win the title.