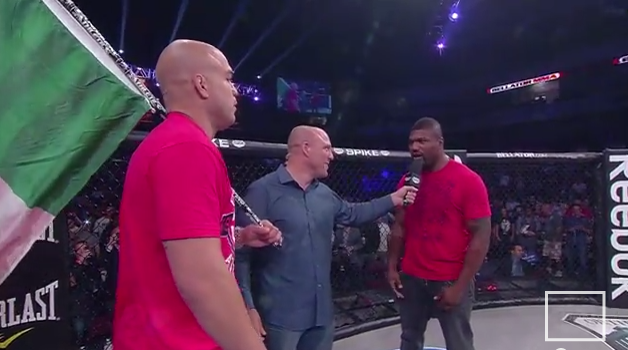 Before I talk about the prospect of Tito Ortiz vs. Rampage Jackson, watch Bellator’s announcement of the fight if you haven’t yet.

At simply promoting a moment, I thought the announcement was amazing.

Well, almost all of the announcement was amazing. We discussed the rumored Roy Jones Jr. vs. Rampage fight and the big picture is that a boxing fight between the two is probably a bigger fight in 2013 simply because Roy Jones is a bigger star in the sports world than Tito Ortiz. This fight is smarter for Bellator because now, Rampage won’t have to look foolish in losing to a boxer. And he’ll probably beat Ortiz.

But by flying Jones Jr. to the Bellator show last night simply to swerve the Internet audience seemed like a big waste of time. It actually feels like something TNA would do. Are we sure Vince Russo isn’t working for Bellator?

Outside of that, it felt like a great moment. But that’s also a problem. It’s a moment when it needs to be an entire story.

Once the sounds of children saying the Pledge Of Allegiance came on over the loudspeaker, you knew that soon thereafter Eminem’s voice would follow. “Mosh” has been Tito Ortiz’s song for years. The way it was shot where you didn’t really see Ortiz, but instead saw his silhouette was great producing.

I think the build-up will be fun. Rampage and Tito have done great jobs in the past at promoting fights. But what happens when they step into the cage? I think they’ve both lost the trust of the type of fans who will pay to see them fight. Both guys are chicken little. Rampage is coming off three straight losses and he didn’t look good in any of the three. Tito has lost six of his last seven fights. Both have blamed Dana White for their problems in the past. Both have used the old, “This time I prepared well and trained hard,” in the past and then gone out and stunk up the joint.

In fact, Rampage used it in promoting this fight.

Here were his words:

I’m training hard man. I’m back motivated and found my love for MMA again. Now, I’m with a reputable company that knows how to treat their fighters. It’s on.

Chicken little, the sky is falling.

As a SpikeTV fight, I’d definitely tune it. I like both guys as personalities and have been a fan of both in the past. Spike would have to ante up a lot of money for a decent rating on TV.

But to pay for it on PPV, knowing that both guys are well past their prime? I think only the die hard of the die hards will do that.

While Bellator has several good fighters like Michael Chandler and Ben Askren, no one is really marketable outside of King Mo and Rampage and now Tito. That reminded me of a time in the Monday Night Wars when WWF started firing shots at WCW for taking their older talent. I tweeted something about it that some MMA fans had fun with and retweeted.

For Rampage, beating Tito Ortiz is doable and vital as he’s Bellator’s biggest star. But what happens after that? Do they float Babalu at him? Maybe Vernon “Tiger” White is available for a booking? What about Jeremy Horn?

I’ll have fun watching the build-up, but based on past history, this isn’t going to help Bellator much, if at all.