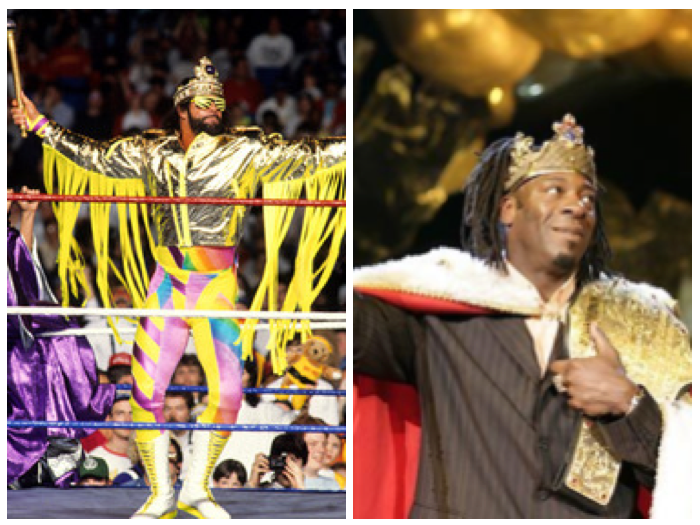 Don: Savage’s run as Macho King was a great way to pit his heel character in a new direction, especially when he had slaves carry him to the ring on pillows (or whatever that thing was called). But other than that, and the scepter, he was just plain Macho.

Big D: I’m picking Savage to win even though Booker probably deserves the W more. Randy Savage’s Macho King gimmick, although entertaining, was like the least memorable run he had his entire time in WWF whereas King Booker was a complete reinvention of himself.

Duan: I love Booker T, but I must admit, his run as king wasn’t among my favourite parts of his career. I felt he had one foot out the door at that point and it was visible in his work.

GG: That’s a good point. I remember King Booker more for his accent and the way he took on that king persona way more than his ring work. For a guy who was underrated for most of his WCW run, late in his WWE run, he was quite overrated.

Not until maybe late 92, did I think Savage’s ring work ever suffered.

Don: Booker took up the accent and was hardly ever seen without his robe. The way he looked down upon the commoners made me strive to be the best commoner I could be.

Big D: He managed to reinvent himself completely with that gimmick and worked it perfectly for a year until HunTor smooshed him at that Summerslam.

GG: I don’t disagree with you. But his wrestling sucked.

Big D: Point is, he did more with the “king” gimmick than Randy Savage.

Duan: Booker was just a little unmotivated, as he was in TNA too. When he came back though, he showed he still had it in him to go when he wanted to.

Don: Everybody knows how big a Savage fan I am, but I’m going with KING BOOKAH on this one. I was quite entertained by the King and Queen when they ruled the WWE, but how would he get past Savage?

Alan: These two could have had one hell of a match circa 1997. Randy always seemed motivated working with younger guys who worked hard (I think it pushed him to not want to be shown up) and Booker in the mid 90s was definitely a great up and comer. Obviously we’re dealing with the Macho King here rather than the Macho Man, and if that’s the case you know there’s going to be an extra mean streak.

Duan: To me this one works best with The Mach as the main event heel, and Booker as a rising underdog, who pushes him close, but is beaten in the end. A couple of close calls for Savage, but he turns it around with a low blow to set up the big elbow off the top.

Alan: I see Savage as my big heel going far in this tournament. Booker will put up a valiant fight though. I see him missing a Harlem Hangover, and Savage will spring to the top and quickly hit the elbow for the win.

Big D: I’m changing my mind. I do want to go with Booker here.

Don: In my match, Booker would miss the scissors kick, which would lead to Macho climbing the ropes for the BIG ELBOW. Future Queen Sharmell would distract him, causing Macho to do his MACHO POINT at her, allowing Booker to recover. Savage turns around.. BOOK. END. And of course, Savage would kick out. Booker and Sharmell would argue with the referee. As Macho climbs to the top again for his patented MACHO DOUBLE AXE HANDLE who else but STEVIE RAY slides out from under the ring, and nails Savage in the back of the head with a slapjack. Savage falls, Booker pins him. Spinaroonie time.

GG: Big D and Don go with King Booker, but the rest of us go with the Macho King so Savage wins in a squeaker.

That ends the first round. Our first second round match-up is Harley Race vs. Owen Hart. 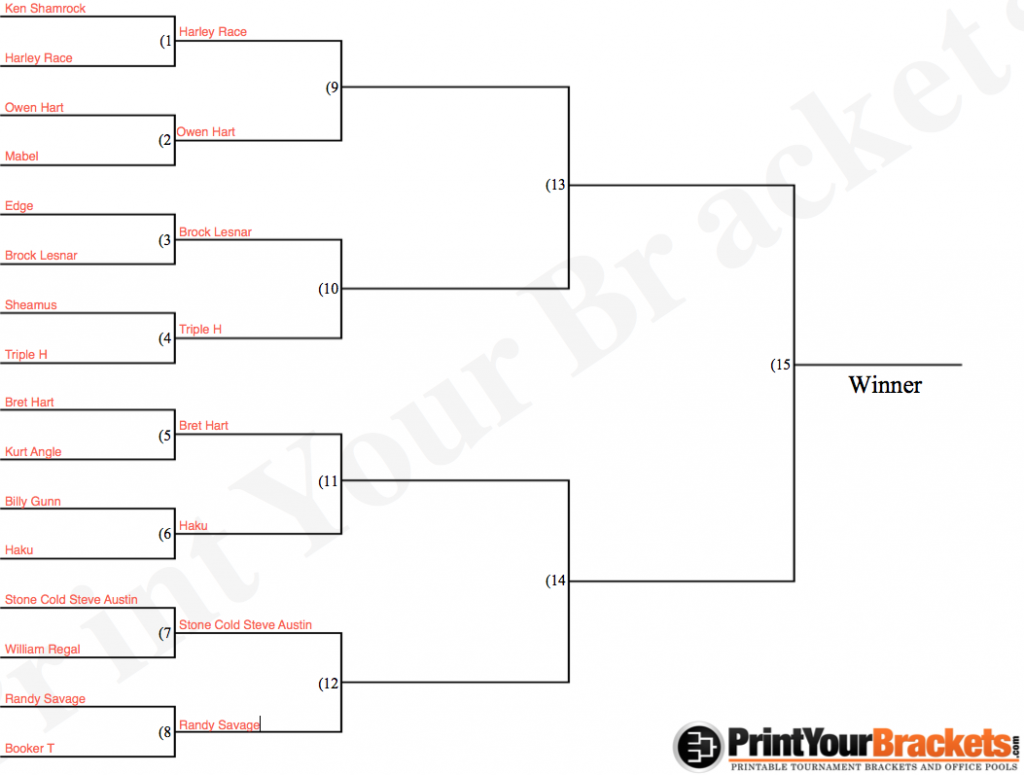 Tags: Booker T, King Of All Kings, King Of The Ring, Randy Savage