We are finally onto the second round and we have quite the mix of eras here. Harley Race is a historical NWA champion while Owen Hart is a memorable character and good wrestler from the 90s. This one goes down to the wire.

Big D: I am going to go with Owen here. I love Harley but by this time, he’s already coming to the ring hammered and acting unprofessional. As far as finish goes, I say Owen wins with the Sharpshooter clean in the middle.

GG: Harley’s not tapping to that move. Meltzer said someone told Harley their finisher was a drop kick off the top and Harley said he was moving out of the way rather than taking the move. I don’t consider this only to be about their run and push when they had the crown. If need be, Harley could’ve still kicked ass in 86. He was slower. Hurt. Probably didn’t care as much. But that was partly because of the push and his willingness to be in the WWF as he could see where the landscape was going.

I love Owen. But he was no Harley Race.

Big D: No he wasn’t, but King Harley was not the Harley of the 70s. He was a drunk. Owen goes over in my eyes

GG: You missed my entire point, but that won’t be the last time.

Alan: Owen needs to make this a game of cat and mouse. Harley wouldn’t be used to a guy with his agility, speed and trickery. I think Owen will frustrate Race and cause him to make a mistake. It’ll be a quick pin off a spinning heel kick or maybe a cradle which gets Owen the duke.

GG: I think that’s what the finish would have to be if Owen wins. He has to surprise the old man and get the pin kind of out of nowhere.

Alan: King Harley was good but he wasn’t The King Of Hearts!

Don: When I think of Harley Race, I think of the tough-as-nails guy who would sneer in the direction of Owen Hart’s Nose. And then he would work that nose over during the match, even grabbing it with his index finger, and hitting him with an elbow, followed by a couple of knee drops.

Duan: As much as I feel this match would work best with Owen flying around the ring as a showboat heel, and Harley giving him nothing to work with and then just punching him in the face for the finish, it leads to the wrong guy going over.

Don: But Harley wouldn’t take much of that fancy dancy flippy doo stuff that Owen will try to hit him with. And I love Owen, he was the perennial underdog whom I would cheer for in this match. But it would be equivalent to WrestleMania V when the Rockers did what they could against the Twin Towers, only to get squashed in the end. Owen would do what he could to keep Race off tempo, hitting him from all different angles. But then Race would take over, dragging the match to a halt. Finally he’ll be hitting the diving headbutt followed by a piledriver… and it’s over.

Duan: I said in round one that I don’t think Race should be a serious contender in this and that hasn’t changed. Owen was a great King – one of the best – and deserves to move on. He finds away to manipulate the situation to his advantage and takes the three count.

GG: I full expected the over-30 crew to get overtaken by the over-20 crew with this one. That’s why there’s five of us. We need those ties broken. The King of Hearts goes over here!

Our next match-up is a match we saw last year and early this year. It’s Triple H vs. Brock Lesnar. 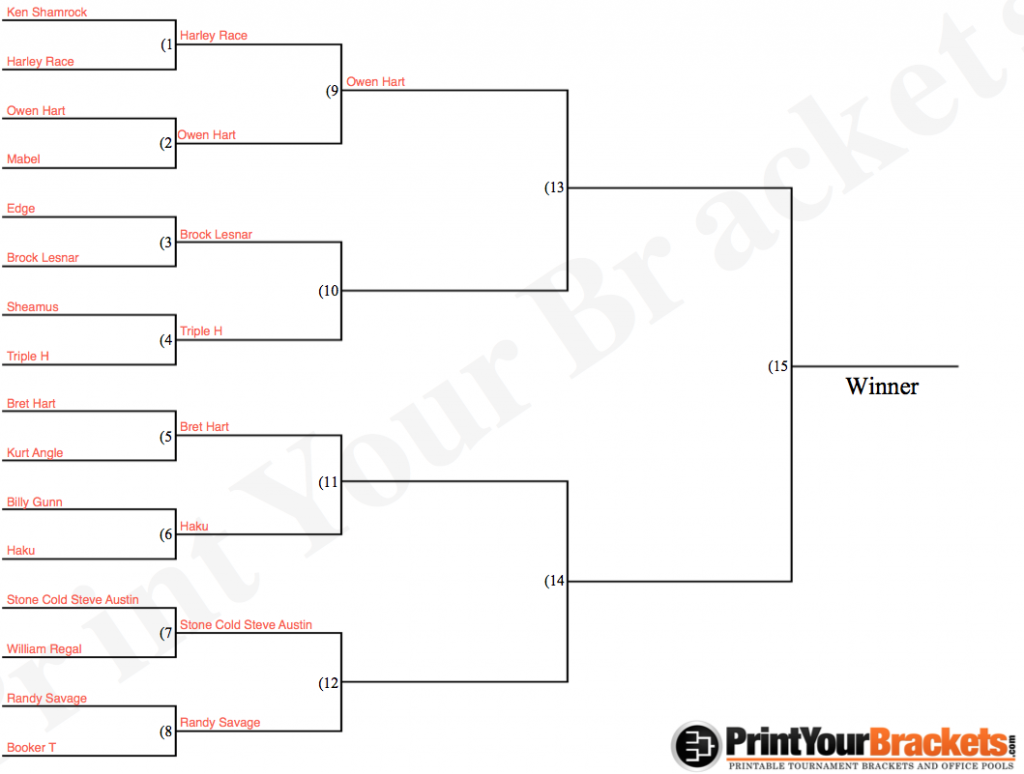