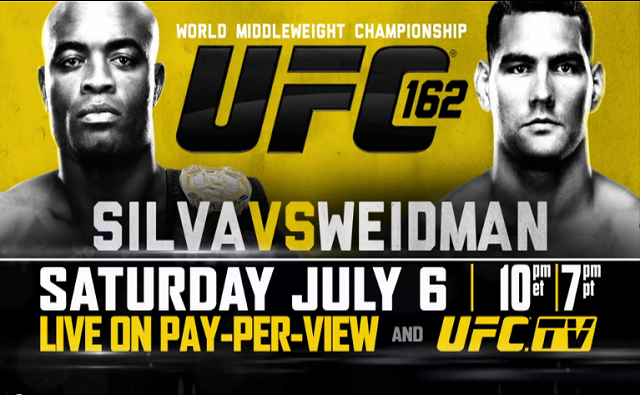 Is this fight important to the public simply because it’s an Anderson Silva fight, or because people really think Chris Weidman can beat him? I’d say it’s about 80/20 in favor of the former. Anderson Silva is on a very short list of people who can make a claim for the hypothetical greatest MMA fighter of all-time crown.

Chris Weidman is a very good fighter, but does “very good” fighter beat Anderson Silva? We’ll answer that question below.

If you want to hear what Heidi Fang (@heidifang) from MMA Fight Corner thinks, I discussed the entire UFC 162 card in detail with her on the most recent episode of FGB Radio.

Duan: Silva by 3rd round TKO
There were times during 2009 and 2010 that I thought Anderson Silva was at tipping point and was just waiting for the right opponent to come along and nudge him over. I don’t really feel that’s the case anymore. Frankly, he’s looked back to his best in his last four performances, and that’s an Anderson Silva I can’t pick against regardless of who is in the opposing corner.

No doubt Chris Weidman is an excellent rising talent. I know there are folks out-there who believe he has the right style to take out the champion, but many others before him had the skills and style to beat Silva, but they didn’t get the job done. This will only be the challenger’s tenth fight as a professional. His resume is still super slim. Yes, he is undefeated. Yes, he beat Damian Maia and Mark Munoz, and those guys are good middleweights contenders, but they don’t prepare you for Anderson Silva. This is the greatest fighter to ever compete in this sport. Weidman has never headlined a major show like this, he has never gone five rounds, and he’s never had to deal with this type of pressure.

I always base my picks on the known quantity. There are too many questions still unanswered with Weidman. I see him being out of ideas and overwhelmed by the third.

Alan: Silva by 2nd round TKO
I’ve reached to go against Anderson more times than I can remember. This is one that I’d have definitely picked against him 2 or 3 years ago. But now I’ve been burned by it so many times that I simply say “I’m picking Silva until he loses”. Weidman’s submissions and grappling are most definitely a threat but so many guys have had weapons that were “a threat” to the Brazlian champ and time after time, he walks through it with the gold.

Big D: Silva by 2nd round KO
Everybody is talking about Weidman. I like the kid. I think he has a solid style that will present challenges to Silva, but don’t you think Silva is aware of this? But what we aren’t aware of however is the state of Weidman’s jaw. Has he ever been hit this hard? Unless this is the night Silva suddenly “gets old”, I predict a victory and finish. Then lets see what GSP’s next excuse will be for ducking him.

Cactus Jim: Silva by 3rd round KO
I subscribe to Alan’s school of thought that it would be very hard for me to pick against Silva until someone actually beats him. He is as dominant a champion as the sport has ever seen. Weidman is a game contender and has put together some good wins, but I just don’t think he has what it takes to deal with Silva’s movement. In this bout, Silva will counter early and ultimately wear Weidman down with his trademark knees and snapping jab, finishing the job early in the 3rd.

Steve: Silva by 4th round submission
I’ve got a personal interest in this fight having followed Chris Weidman on his ascent to the top of the middleweight division, not to mention having had the chance to interview him at the UFC on FOX in Chicago. Weidman is well known for his collegiate/All-American wrestling credentials at Hofstra. The problem for him is that Silva has successfully dealt with equally skilled wrestlers before – most famously defeating Chael Sonnen twice. We also learned from the first Sonnen fight that Silva finds ways to win even in fights where he’s behind for 4+ rounds. I can see Weidman doing well early in the fight. I can even see him taking down Silva multiple times. And yet, when push comes to shove, Silva is the longest reigning champion in UFC for a reason. He’s unbelievably quick for his age. He’s incredibly strong for a middleweight (and proves it by being able to fight naturally at light heavyweight). The accuracy of his striking is astounding and his submission game is ALWAYS dangerous. Weidman is a great wrestler, an improving striker (witness the Mark Munoz fight) and all-around athlete but to put a bottom line on it “he’s no Anderson Silva.”

GG: Silva by 3rd round TKO
Having younger fighters constantly push him must help keep Silva on his toes and at the top of his game now 17 years after his debut in Brazil. The next guy is Chris Weidman who at 29 should be right in his prime. Anderson Silva is no longer in his prime, but looking at him, you could barely tell. He’s finished all of his last five fights, and done so impressively. At some point, he’s either going to retire or he’s going to lose. Figuring out when his body finally lets him down is too hard to predict. So, I’m going to base this on Anderson at being near his best.

If Anderson is near his best, he beats this Chris Weidman. I think Weidman will give him enough problems to push him into the third round, using his wrestling to keep Silva off-balanced, much like Chael Sonnen did. However, I think Anderson figures him out before he figured Chael out. By the third round, he’ll see the shots coming, counter him, and knock him out.

We’ll have play by play of the show tomorrow.