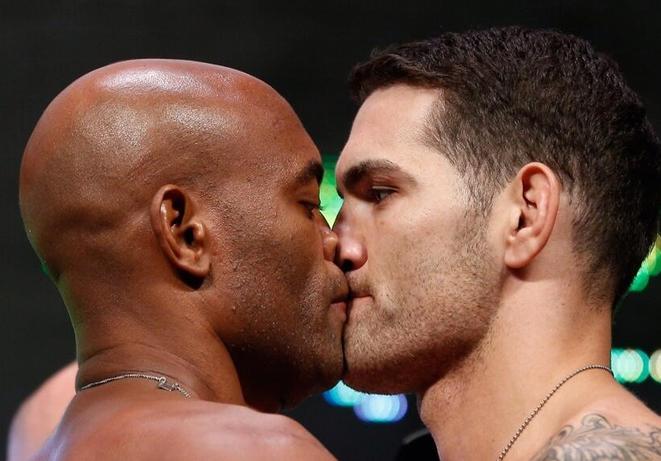 None of the FGB crew bought the Weidman hype and picked him to upset Anderson Silva. We all had Anderson Silva winning and by stoppage.

While the undercard isn’t box office, there are some very fun fights on paper. But the Silva/Weidman fight is what everyone is looking forward to most.

That was an easy round for Siver. He was on top for more than half the round. He was in Swanson’s half guard, but cradled his head and was punching him.

Round two was close, but Swanson had a huge throw late in the round was riding him and almost got a submission on him right before the end of the round. He may have taken the round.

Swanson ate his lunch in the third round. He landed a great right hand and followed up with right-left combos until Siver went down. On the ground, Swanson continued to land right hands and pulled off him when he thought he was out. Then Herb Dean stopped it.

Boetsch handled Munoz on the ground for part of the round and in the clinch, but Munoz landed the better shots on the feet. More than likely Boetsch’s round just for the control aspect.

It was a dominant round for Munoz after an early back and forth. Munoz got a trip takedown and pounded on Boetsch for much of the round. Boetsch might be tired. Munoz landed a knee to Boetsch who was sitting on one knee.

Munoz also dominated the second round, though stuck his head into three guillotine attemps. He worked hard for the takedown and every attempt Boetsch had to move, Munoz was on him and continued following up with punches on the top, including some nasty ones when he was in a turtle position. Munoz tried some crazy jumping punches on the ground at the end. He’ll win this one.

Gracie had a decent first down as he was able to get Kennedy down several times, but near the end of the round, he looked to be getting tired and Kennedy started taking over on top.

Kennedy roughed him up a bit in the second. He kept Gracie on the ground and opened up a cut over his eye. I have the fight split, but Kennedy’s second round was bigger than Gracie’s first.

Third round was sleep inducing. Kennedy landed so many more punches than Gracie and that’s the difference. Gracie looked tired and a bit uninspired. Kennedy should win this fight.

It was a very solid first round for Edgar. He controlled Oliveira with takedowns and was able to get out of the way when Oliveira wanted to scramble into submissions. Edgar was also much better on the feet.

Oliveira started the round very well, but Frankie caught him with a right hand that stopped him in his tracks. Edgar landed several more hard shots and Oliveira was just trying to get him to the ground. He should win a decision.

Weidman had him down early and landed a few shots on the ground. He went for a heel hook, but Silva got out of it. And then the trash talking started. Silva dropped his hands, smiled when Weidman hit him, and kept taunting him. Silva landed some punches, but missed his kicks.

Silva tried the same thing in the second, but Weidman caught him. He put him down and landed a few shots on the ground to end it. Anderson pretended like he was hurt and then was hurt. Amazing.