What happened to the fun streak of shows? This show was a bit mind-boggling and more than anything, just flat out boring. And Daniel Bryan’s character took a turn for the weird.

I’m not quite sure what they’re doing with him. It seemed like he was getting way over as a babyface, but like they’ve done with Dolph Ziggler lately and Sheamus for the last year, they’re having him do heelish things, which takes away from how over he is.

After beating Randy Orton last week and bragging about it all on Smackdown, he took a turn for the annoying. He opened the Money In The Bank All-Star promo where every Money In The Bank contestant for the WWE title spoke except for RVD. Most of the promo was boring and the crowd only really got excited when Punk came out. They all said why they should win the Money In The Bank.

Bryan didn’t actually wrestle on the show. Instead, he refereed a match between Randy Orton and Kane and while I think he has depth as a character, his depth shows strongest when he’s wrestling because he’s so good at telling stories inside the ring with his wrestling. By having him not wrestle, he became the third annoying wheel in a bad match. I didn’t think it was good usage of him at all.

He played heel ref helping Kane win who didn’t want his help. The story was that since he beat Orton cleanly and fairly, he wanted Kane to know that the only way he could beat Orton was with Bryan’s help.

For some reason, they decided to do a John Cena vs. Alberto Del Rio match. This was really weird. For one, it was a two hour build to a match they were trying to put over as so special. And secondly, the match was non-title so I’m not sure how big it could’ve been. And third, like Vince McMahon would say later in the show, we’re used to the important matches being on PPV, thus, this didn’t feel all that special. Wait, Vince has the final say. So was he making fun of himself?

The cool thing they did was put over both belts with packages featuring former champions, including Sting. I mentioned that there’s talk of Sting coming to WWE earlier today.

And the match didn’t match the created buzz. This might just be me personally, but I don’t see a lot of chemistry between the two wrestlers. And I’m not sure if Cena really needed to pin Del Rio.

Oddly, Ricardo was also suspended for wellness issues. Ricardo, of all people…

Henry yet again delivered the best promo on the show, looking at the camera at the end in a very menacing way. You kind of want him to beat John Cena. And the way this is being built, you sort of believe it’s going to happen.

Didn’t I tell you Mark Henry is scary? 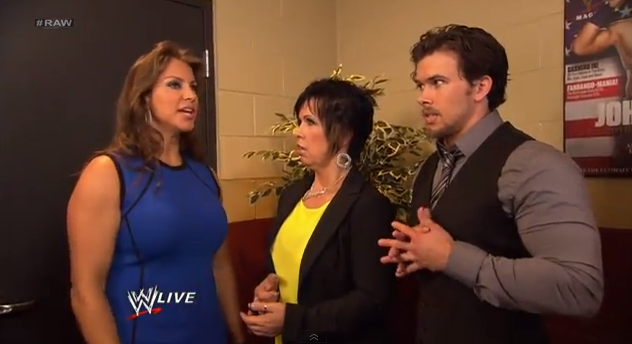