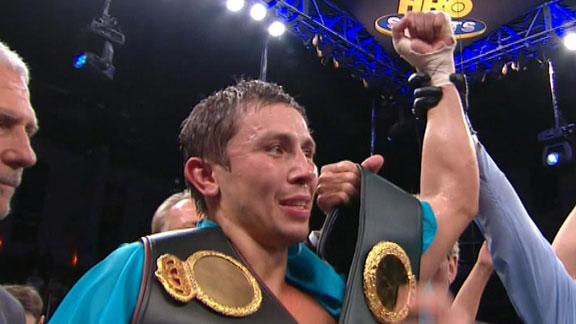 Gennady Golovkin proved in his HBO headliner that there is a sizable gap between he and even the top middleweight contenders. In what was the standout performance of 2013 so far, the Kazakh KO King ended Matthew Macklin’s third bid at a world title in just three rounds.

As somebody who has followed Macklin’s career since he was a rising fighter on the domestic scene, I’m sorry to say this one played out exactly how I thought it would. Matthew has always been a guy who would take shots to give some, and this time it got him chopped down by a technically better, more accurate and heavier fisted foe. The scary thing is that Macklin is a championship class fighter, and GGG was on a different level.

Talk now again turns to matching Golovkin with lineal champion Sergio Martinez. I’m not sure how I feel about that one yet. Sergio is 38, and is coming to the end of his run. I don’t know this is a fight he needs on his way out the door. If he heals up well and comes back looking a hundred percent (or at-least somewhere close to it), it’s a cracking fight and one that can do business.

However, if what we saw in the Martin Murray bout is reflective of what Martinez has got left, I don’t want to see him being sent out to get plowed down by Golovkin. I don’t think that would really prove anything. Lou DiBella has already made it clear that that’s not what is going to happen. The plan is to take a good look at Martinez to make sure he’s up to it first before throwing him back in there with an opponent like Glovokin. That’s refreshing to hear from a fight promoter. Sergio wants the fight, so he must still be confident he can bounce-back strong.

Moving forward, I think Golovkin has a real shot of becoming a break out star. He’s already got that buzz within the boxing community and there are signs that it’s starting to catch on elsewhere to. This show did 1.1 million viewers with him main eventing, a good number for HBO, made more impressive by the fact that there has been notable fight on fight growth between each of his three appearances on the network. Turning in a performance like that in his most watched fight can’t hurt either. This is a guy with momentum on his side.