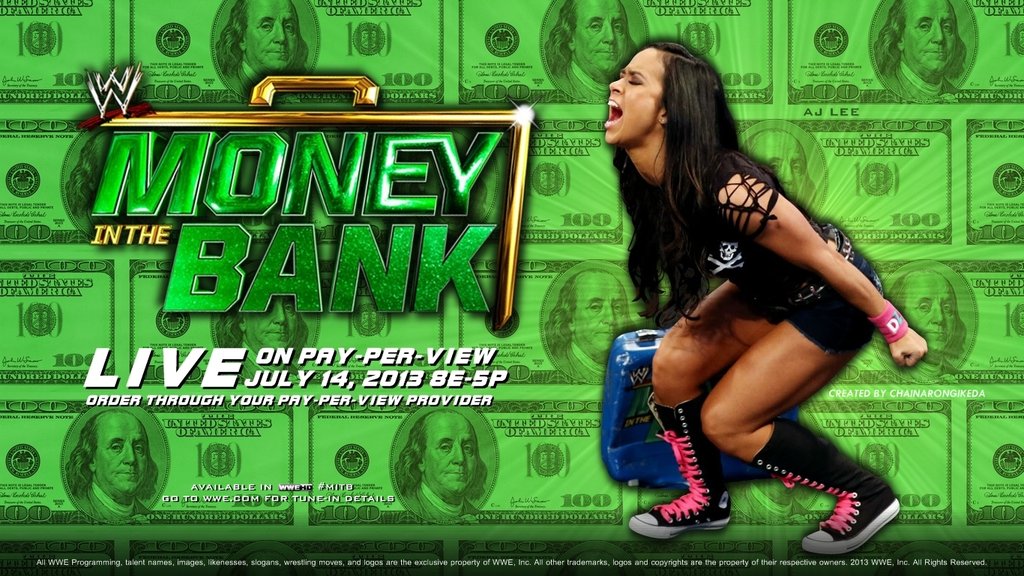 WWE’s 2013 Money In The Bank show is this weekend. After Royal Rumble, WrestleMania, and SummerSlam, I’m usually most interested in this show with Elimination Chamber right behind it. I’m a sucker for the Money In The Bank ladder match.

This show doesn’t have the greatest lineup, but because both Money In The Bank matches have great workers, I’m expecting good stuff.

The Shield vs. The Usos

Why is this match on the pre-show? There are two matches on this show that should’ve been in its place. Curtis Axel vs. the king of the pre-show match The Miz is as cold as ice. And AJ vs. Kaitlyn is just filler programming as it is.

I’m a fan of the Usos, but now is not the time to beat The Shield, even if the goal is for Dean Ambrose to win the Future Stars briefcase. If it was on the PPV, it could’ve been a hot 10 minute match. Here, they’ll probably even give them less time. I hope both teams come out looking good here, with Roman Reigns spearing Jey or Jimmy out of their shoes.

Prediction: The Shield by pinfall

The way this thing is being booked, you’d think Kaitlyn finally gets revenge from all the fat jokes AJ is making about her. But this is WWE and they love hating on women. Plus, AJ and Dolph is the program that is the more interesting one and I think AJ keeps the belt, maybe even with help by Big E.

Curtis Axel vs. The Miz

This is a dead angle and they need to get Axel away from Miz. It seems like every program Miz is featured in is cold. The most frustrating thing here would be if Miz beat Axel and if they want to switch a belt, they could switch this one. But I hope Paul Heyman is somehow involved here and Axel is able to fight out of the Figure Four and hit a Perfect Plex.

They sure didn’t do anything on Raw to sell the match and from what I’ve seen from the Smackdown spoilers, there wasn’t anything going on there either. They really should’ve kept Ryback away and thrown Jericho into the program with Dolph Ziggler and Alberto Del Rio. Everything they’ve done with Ryback since losing to John Cena has been awful including having him lose by verbal tap out to the Miz of all people and then hugging Vickie on Raw. If I didn’t know better, I’d think they were writing him off TV.

Jericho has been amazing in this entire run and if he’s ready to leave now, losing to Ryback and putting him over strong is probably his move. I’d still love to see Jericho get close to a submission playing off the knee injury that Ryback supposedly has, but in the end, he should eat the Shell Shock and lose.

Wade Barrett vs. Cody Rhodes vs. Damien Sandow vs. Dean Ambrose vs. Fandango vs. Jack Swagger vs. Antonio Cesaro

All of our choices to win both briefcases were published yesterday.

What I wrote yesterday:

Like Duan, I think this is just an ornament for the Shield. I don’t think it’d be wise to put Ambrose in a title match and I’d have him hold the briefcase right up until next year’s show. Use it to help them gain steam and then maybe by next year, he’s ready to hold one of the straps.

All Stars Money In The Bank Ladder Match

CM Punk vs. Daniel Bryan vs. Randy Orton vs. Sheamus vs. Christian vs. Rob Van Dam

According to WWE.com, Kane is out of the match and I hope they don’t replace him. I think the match will be better with six than with seven.

What I wrote yesterday:

I think it comes down to two guys – Daniel Bryan and Randy Orton. Orton still has a heel turn in him somewhere and if they don’t go with Bryan as the obvious, I can see them letting Orton win it. CM Punk would be my third choice, but his goal is simple and that’s Brock Lesnar. I think having RVD win it would actually be bad for him. He needs to have the less is more gimmick. I’m going to go with Bryan too, but if they decide to put the belt on Henry, I could see Orton winning it too.

This match confuses me. Del Rio turned heel in the match that played off Ziggler’s concussion and in turn, also turned Ziggler face. Ziggler is still with AJ and Big E who are heels. Such a start and stop title reign for Del Rio wouldn’t be beneficial and I don’t feel like Ziggler is as hot as he should be to take the title back. There’s a possibility that AJ or Big E’s help could backfire and Del Rio could come out of it with the title. If they move the title back to Dolph so quickly, what the heck do you do with Del Rio?

Also, if Dolph doesn’t win and AJ keeps her belt, there’s still friction there between the two of them.

I so very much hope Mark Henry wins the belt even if it means Cena takes the belt back Monday. Henry has been utterly amazing in the build up to this match from his fake retirement speech to every time he’s been in the ring with Cena. He’s gold.

Cena is as polarizing as usual. He plays the scared babyface very well. I think most believe Cena wins here and faces whoever comes out on top of the All-Stars Money In The Bank ladder match. I still think that could happen. But I’m also predicting a Mark Henry win here. I think Cena will get it back before SummerSlam.