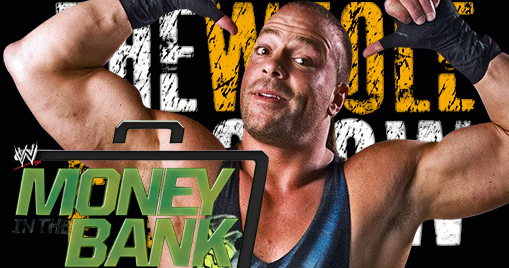 It’s the Money In The Bank show and the return of RVD!

I didn’t see the pre-show match, but the Shield retained against The Usos in what was said to be a really good match.

Here’s your Money In The Bank recap:

Some really cool spots here. Cody Rhodes stole the show and it was built up to make it look like he was going to win. Michael Cole oversold the finish way too much.

Ambrose did a skin the cat on a ladder that Cesaro and Swagger were holding up in the air.

Rhodes hit a package suplex on Cesaro onto a ladder propped against the top rope. Most of the guys were out of the match early and on the floor, which made it not as intuitive as some of the better ones.

Rhodes and Ambrose were fighting on top of the ladder and Rhodes was busted open over his eye brow hard way. The Shield and Usos came in. Rhodes had the tall ladder and was by himself ready to get the briefcase, but Sandow tossed him off and grabbed the case.

Brad Maddox spent 10 minutes talking about Vickie and wasting our $55.

The Miz pulled a heel move and faked that Paul Heyman punched him in the face on the outside. He even took a back bump. The referee kicked Heyman out and the crowd started chanting for Heyman.

Axel hit Miz with a Perfect Plex, but Miz kicked out. Miz put on the Figure Four and Axel turned him and I thought Miz was going to tap.

Axel finally hit Miz with his reverse version of the Rude Awakening for the pin fall.

AJ sells just like Jeff Hardy. I know she was a Lita mark, but I bet you she was a big Hardy Boyz fan too. This match wasn’t quite as good as their match at Payback, but it was still fun as a power woman/small woman match. AJ also takes a spear like no one else.

AJ sunk in her Black Widow finisher and Kaitlyn sold it extremely well and had to tap out.

This was the best match of Ryback’s career and while that’s not saying much, Jericho was really working with a broom stick. Ryback was rarely in the right spot and awkward throughout.

This was interesting booking as Ryback didn’t get to do all of his moves and he beat Jericho by rolling him up after Jericho missed the Lionsault. Jericho made the match as interesting as possible, but Ryback was so clumsy. And Ryback has his first PPV win in a year.

It was a really good match with a bad finish. I guess they want to continue the slow burn on the Ziggler/AJ breakup.

Ziggler was on his game tonight. Del Rio kept up with him. They did a match with a lot quick covers and two counts. I never thought the finish was happening on any of the two counts, so maybe it wasn’t as dramatic as it could’ve been. I think most felt there was going to be interference in the match and that’s what we waited for.

AJ came out and Ziggler yelled at her that he could win on his own. She was sad but didn’t leave. Ziggler caught Alberto’s Superkick and then AJ came into the ring and pelted Del Rio with the belt for the DQ. It didn’t make much sense at all.

It would’ve been much better had Big E been involved and caused Dolph to lose by pin fall.

Slow match, but effective in spots. The story was that Henry was slowly beating Cena down and every time Cena tried his Hail Mary, which was the AA, he couldn’t get him up.

7. RVD vs. Christian vs. Daniel Bryan vs. Randy Orton vs. Sheamus vs. CM Punk

So far, no replacement guy for Kane.

To start the match, they all jumped RVD and dumped him out. They cleared the ring for CM Punk and Daniel Bryan to face off. RVD tried to get back in the ring and they dumped him out again.

He got back in the ring and cleared it out, doing the front somersault spot and the side kick off the top rope. Crowd loves him.

All six guys were up on two ladders trying to get the briefcase and Punk just pushed the briefcase away and it started swinging back and forth. Fun spot with Sheaus and Bryan on top of the ladder – Bryan would hit Sheamus and the crowd would cheer “Yay!” and then Sheamus would punch him and they’d yell, “Boo!”

RVD jumped off the top of the tall ladder to Frog Splash Christian.

Bryan went crazy man on everyone. He did the kicks to both Sheamus and RVD. He did the dive through the ropes onto Punk. He did the double drop kick off the top. Then Curtis Axel came into the ring and hit him with a chair, supposedly to help Punk. Punk then hit the GTS on Axel. Heyman came out and yelled at Axel.

Punk went to climb, but he wasn’t climbing fast enough and Heyman was yelling at him. Heyman then came in the ring and hit him with a chair and walked to the back. RVD went to the ladder and Orton hit him with the RKO off the ladder. Orton climbed up and grabbed the briefcase.