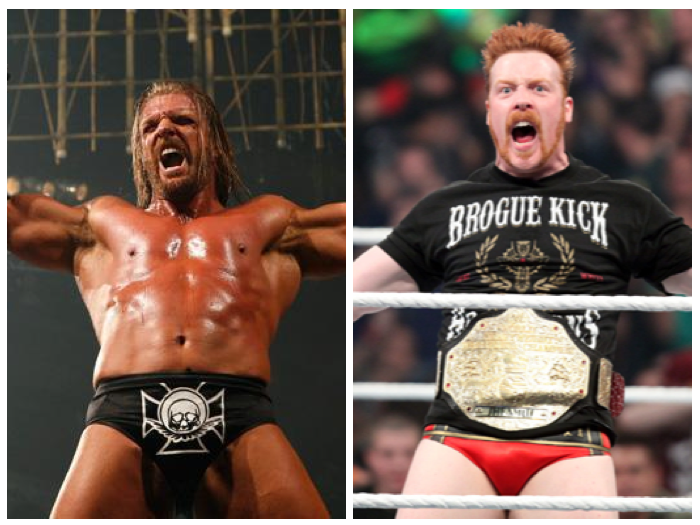 This match has already happened just three years ago. And as a feud, it wasn’t quite memorable. At WrestleMania XXVI, Triple H would get his win, but Sheamus would beat him on the following PPV and Triple H would go away for a while.

GG: Let’s start chopping it up about Sheamus vs. Triple H.

We saw this match a lot a few years ago. They’re buddies. While Sheamus could be something bigger down the line, he’s definitely hit a lull and well, The Game’s The Game.

Alan: Ahhh the student vs. the teacher, a timely tale.

Duan: Triple H’s place in history will probably divide fan opinion more than anyone in the business, with the possible exception of Hulk Hogan. Inside WWE, his contributions to the company will be largely overstated. While internet fans will mostly underrate him. Like most cases of this nature, the truth lies somewhere in between.

Alan: Did HHH teach Sheamus everything he knows or did he just teach him everything Sheamus knows?

Big D: This may sound totally unlike me, but Hun-Tor goes over.

Don: He made Sheamus, so Sheamus OWES him.

GG: Bow down to the king!

Don: HHH needs to be the King of Kings, so I’m sure he’ll hit Sheamus with the Pedigree, pose for about five minutes, and then cover him.

Duan: I would say I’m surely the biggest HHH fan on here. I do genuinely believe the guy is very good performer. I also feel a lot of people forget how big a star he was with the average fan during WWE’s peak years. And yes, I know a lot of that was because he was the guy who wrestled against The Rock, but the fact remains, he was a really big star.

GG: I mostly despise the 2001-2003 version of HHH. That seemed to be his most power hungry stage. But 2004 and later, he really did do things for the future by putting over Benoit, Batista, Cena, and others. But he also made sure that he was on top at that time so that those losses would actually mean something. Did he need to be on top as much as he did? No. But he definitely deserves credit for putting guys over on some of the biggest shows.

Duan: The guy was one of the major players in the only promotion that matters for a very long time – and that covers some boom years for WWE. Has he had some less glowing moments to? Absolutely! But in a decade’s time, if Sheamus has had half the career Triple H has had, he will have done exceptionally well for himself. This ones not tough: The King of Kings moves on.

Alan: You have to think The Game has some wily veteran tricks in the book but the young Irishman is at his peak in terms of strength, speed and aggressiveness. Sheamus will come at HHH hard, but he may end up over-eager and make a mistake. Perhaps that was more like a few years ago, but now I think Sheamus prevails. It may take a couple of Brogue Kicks but he gets it done!

GG: Alan takes Sheamus! But unfortunately, the rest of us chose HHH.

Big D: There’s a ref bump. Hun-Tor goes under the ring to grab a sledge. He’s gonna hit Sheamus. And he thinks about it. And thinks. And thinks. And puts it down a la Piper from WrestleMania 8. Then he gets caught in a Brogue kick. 1-2- foot on the ropes! Sheamus gets up and picks up Hun-Tor and tries to go for a second one, takes too long, pedigree, Hun-Tor DRAGS him to the middle quickly. 1-2-3.

Triple H will face Brock Lesnar in the second round. Bret Hart faces Kurt Angle in the next round. Whoa! 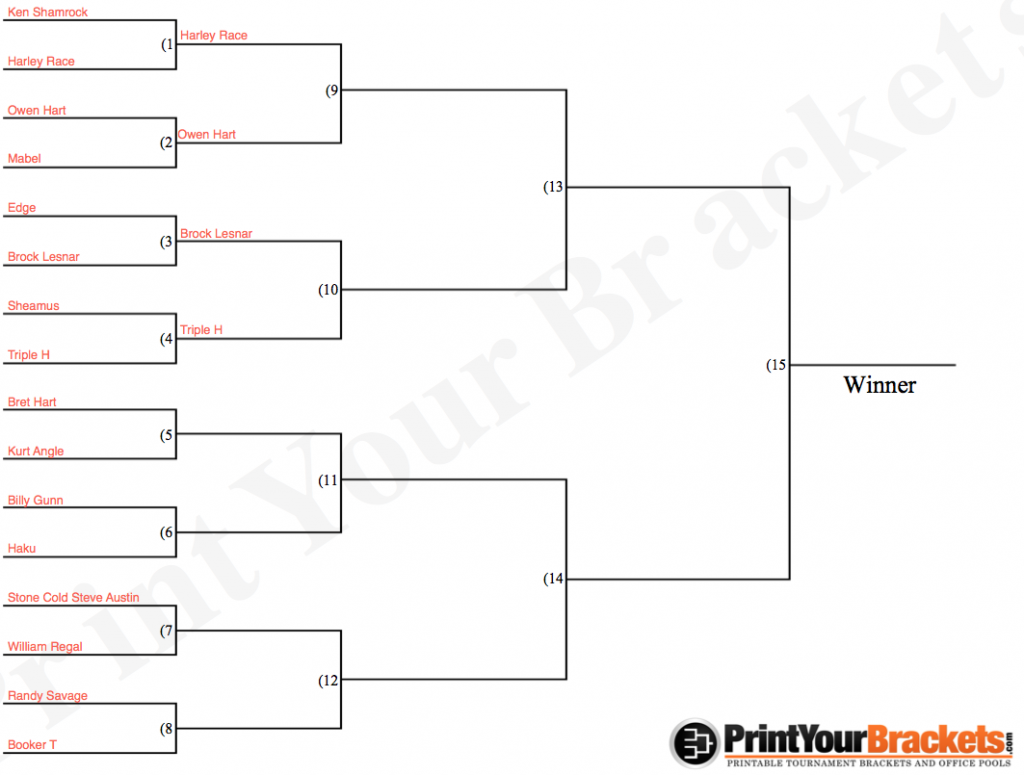 Tags: King Of All Kings, King Of The Ring, Sheamus, Triple H, Triple H vs. Sheamus