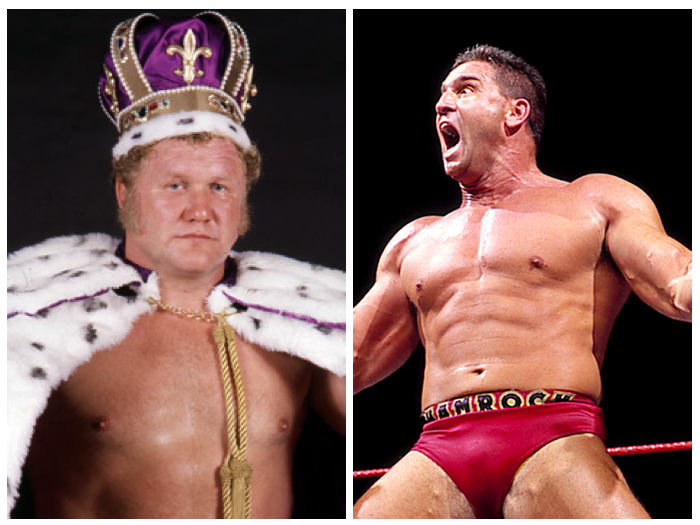 On Monday, we posted the introduction to our King Of All Kings tournament in which we take all past King Of The Ring winners and place them in a tournament with past WWF kings (except Jerry Lawler and Hacksaw King).

Here’s what we thought about the match-up:

Race is an all-time champion and Shamrock’s stay in wrestling was short. Which makes me wonder if Shamrock had not been in the UFC and had been recognized by WWF earlier, could he have been one of the bigger stars in the company, maybe bringing a realism into wrestling that wasn’t there in 1997?

Big D: I don’t feel that Ken Shamrock would’ve been signed at all if it was not for the ABC article and the cult following UFC had. Shamrock was kind of a generic guy by wrestling standards who probably would’ve stayed in the midcard if anything or been saddled with a weak gimmick to really bury him.

Duan: One thing I have always felt is that Shamrock doesn’t get the credit he deserves for his involvement in WWE’s resurgence. You have to remember back when he came in – MMA wasn’t even nearly the accepted sport it is today. To most people at that time, UFC was some brutal underground fight club. Shamrock was a guy who was able to carry that image into WWE. He came across as scary and things were grimy back in the 90’s. It was a real good fit with the no holds barred attitude they were trying to project back then. It just gave the product a sort of edge. It never come off as a publicity stunt pull in either because Ken was able to hold up his side of the bargain in the ring and in character.

GG: That’s sort of what I was trying to get at. Obviously, you already knew he was the real deal so that helped his character. And in the ring he was very athletic.

Harley Race’s character was what tough guys were. If there was no UFC at the time, Shamrock comes into wrestling as a bad-ass, which is exactly what Harley was. Interesting dichotomy.

Now, Harley’s legacy outshines Shamrock’s in wrestling with his multiple world titles. Shamrock’s legacy is more so as a MMA guy. In a pro wrestling ring, Harley has to go over right?

Duan: Harley had that reputation as one of pro wrestling’s true hard men his entire career. I would book this one as a WWE vs. UFC sort of deal. Our toughest guy against theirs.

Alan: This is an interesting one. When Ken snaps he’s an out of control wild-man. All aggression, all anger. Harley goes about his business in a cooler fashion. He’ll calmly and methodically rip your limbs off and make you eat them. Harley’s big knee drop is a weapon but at the same time, it could lead to his downfall. If Ken were to roll out of the way and Harley came crashing leg-first to the mat, he might leave himself weakened for the ankle lock.

Duan: Nobody is disputing Harley Race’s status as a great man, but this is King Of The Ring after all. Wasn’t the king title bestowed on Harley in WWE as a form of mockery? I’m not sure that makes him a strong candidate here. My vote goes to The World’s Most Dangerous King. A referee stoppage after Harley is to tough to quit.

Alan: Prediction: Ken’s gonna snap and Harley is smart enough to channel that into a DQ. Ken lays out a ref and Harley advances.

Cadillac Don: In his prime, Harley Race was probably tougher than Ken Shamrock (projecting toughness in the wrestling ring). The longer the match would go, the more of an edge Race would have. However, Shamrock might be able to surprise Race with a choke or the ankle lock, but good luck to him. Harley would just duck out of the ring when necessary, letting the ref get to a 9 count before climbing back in. He would do his best to frustrate Shamrock, and force him to make a mistake. Then, as Alan said, Harley would just slowly tear him apart.

By a four to one margin, Harley Race moves on to the second round. Duan fought hard for Shamrock, but the former multi-time NWA champion gets the duke and will next face the winner of Owen Hart vs. Mabel. 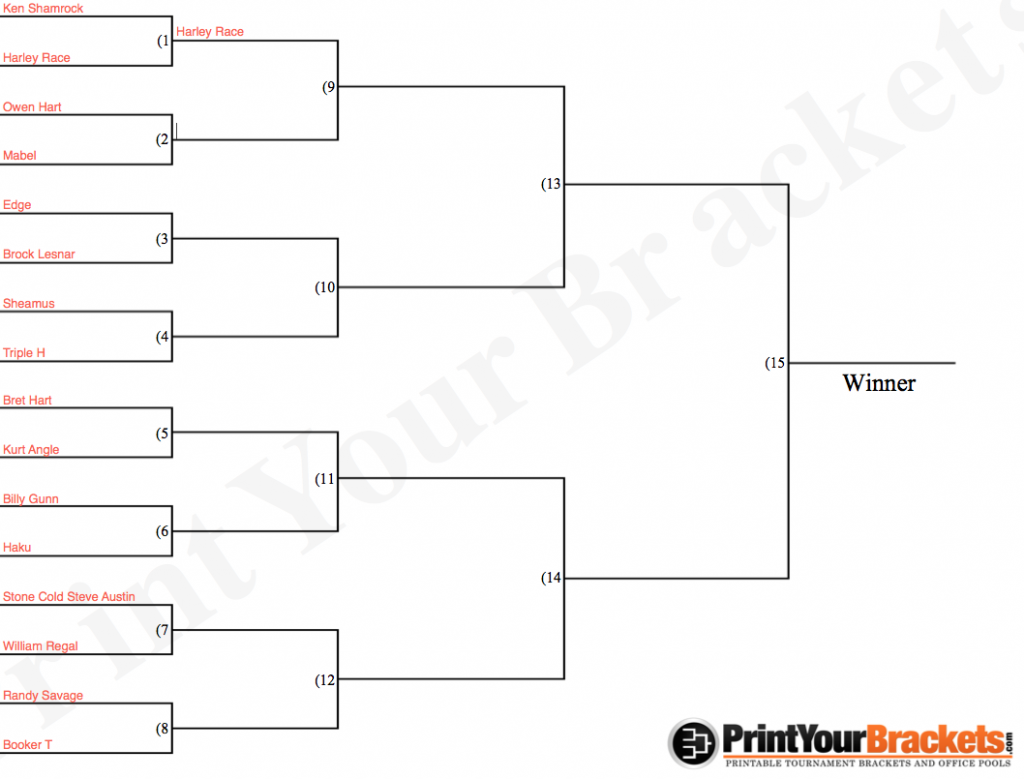