This is one of the match-ups that’s happened before. In fact, it happened on a UK show called Rebellion in 2002. In that match, Brock upended Edge, but that was before Edge really hit his stride in WWE as a perennial champ and main eventer.

So, because Edge lost to Brock already, does that mean he loses this match-up? Or will the Rated R Superstar upset Brock?

GG: Let’s start the Brock/Edge discussion – two of the younger guys on our list.

Duan: I saw this match on a Smackdown house show in 2002 – Brock won that one and he should win this one to.

GG: This one isn’t that cut and dry for me because on paper, Edge has really good credentials. Brock is Brock, but I don’t think it’s a wipeout.

Alan: I was a massive mark for both these guys when they won their respective crowns. They would have been destined for a clash had Edge not needed neck fusion in 2003. In fact, they were on the same team for the match at No Way Out 2003 where Edge was “attacked backstage” to write him out of storylines. Maybe it was Brock? He did turn heel months later after all…..

Big D: I love both guys, but Brock probably should win.

Duan: I have always felt that Edge’s title reigns, Hall of Fame induction and legendary status within WWE overstate his actual stardom. Brock may not have had his longevity, but his impact was still more felt. Plus Brock having a crown and throne is an awesome idea.

Don: Edge would be the major underdog in this match, and really doesn’t have a chance of overpowering Lesnar. But I can see Lesnar making a mistake and Edge capitalizing.

Alan: Edge is an athletic dude no doubt. But Lesnar is on another planet as far as athleticism. So the Canadian will need to use his guile to it’s fullest and try to out-think his mammoth opponent. The smart money says Brock takes this though. He’s just going to be too much for Edge and overwhelm him. The gutsy Rated R Superstar won’t go down without a fight though.

Big D: Like I said… great match. I can’t picture Brock losing in the first round.

Don: Similar to Cena/Brock from last year, Lesnar would dominate the match at first. Then Edge would take out Brock’s little girly legs, work them over, and then hit the Edgecator to twist his knee. Brock would pass out before tapping, but I could see it happening. But why Edge? He’s the company man whom the fan can either love or hate easily, and he would make the King of the Ring title meaningful.

GG: Unfortunately for Edge (and Don), it looks like Brock is winning here on a 4-1 vote. I think Brock takes it as well. Who has a Brock finish?

Big D: Edge fights gallantly. Match goes 17 minutes. Brock works Edge’s arm early on in the match, smashing it into the ring post. Later, Edge hits the spear and when he’s about to lean down to pin Brock, Brock grabs his arm in the Kimura and he taps out.

Brock moves on and faces the winner of Triple H and Sheamus. Could we see a rematch of the 2012/2013 feud in the second round? 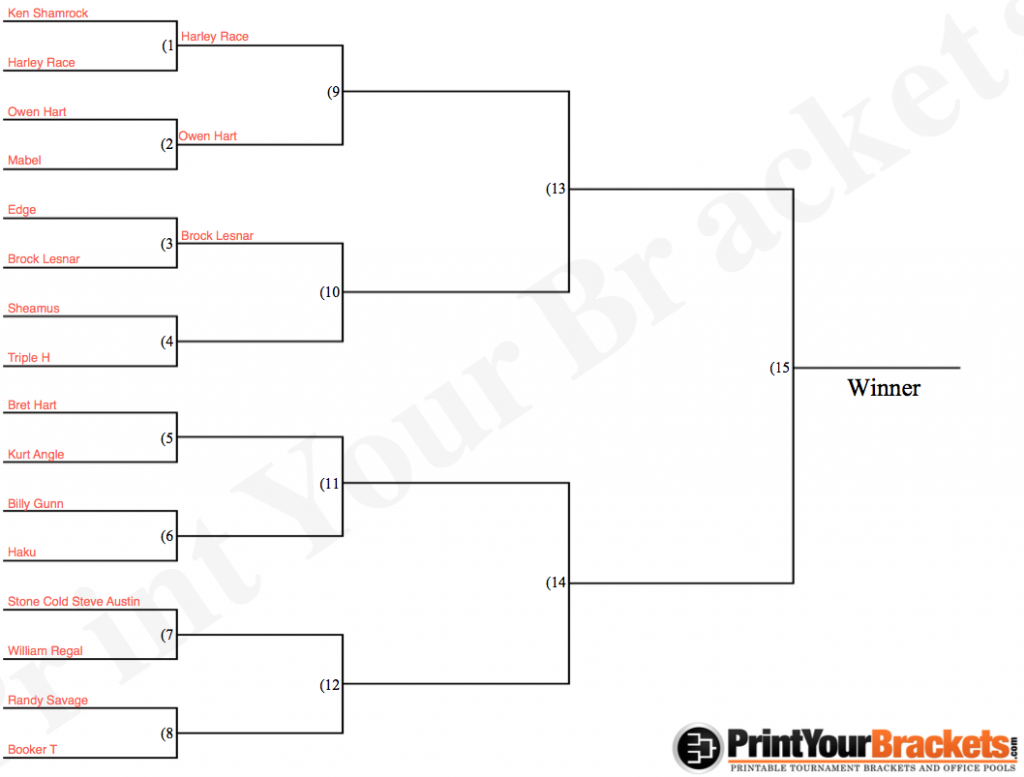