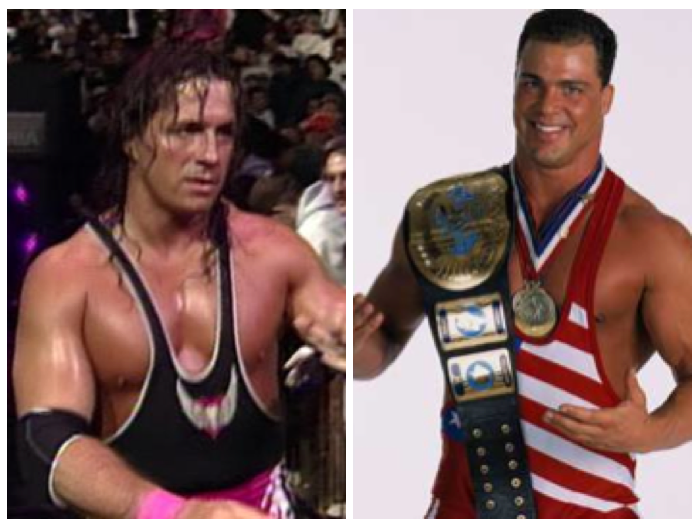 This is probably our most anticipated match-up. It’s one of the few dream matches left in wrestling and sadly, because of Bret Hart’s injuries, will never be able to happen.

GG: This is the best match-up of the first round.

Alan: Two of the best wrestlers to ever step foot in a WWE ring. This is clearly the main event of Round 1.

Don: This is the match would NOT want to see in the first round. Both men could easily be in the finals of any tournament.

Duan: Do you guys remember the news story a few years back when Kurt reached out to Bret to make this match, not realizing that The Hitman couldn’t wrestle anymore? Bret loved the idea though. And in truth, if I could put Hart in with any guy from the era that followed his, this would be the one. It’s the best possible dream match for either man.

Big D: As far as history, Kurt won the largest King of the Ring ever as far as participants went in 2000 and had a really incredible run in the 2001 KOTR PPV. Bret won the first PPV KOTR and arguably the most important and arguably had the best three match run of anybody, PLUS he won the 1991 non-televised KOTR. So…

Don: Compared to the great Benoit/Angle matches back in the day, the biggest difference is the Bret doesn’t have the power of Benoit. But the thing Bret has, and will do, is take a man apart, piece by piece.

Big D: Kurt is much more of an intense animal than Bret as far as tearing up his body and Bret was always more methodical, so part of me thinks that this may have actually worked better with Bret as the heel and Kurt as the babyface.

Alan: Angle’s strengths for this are his quickness and explosives. Bret’s is his ability to methodically neutralize an opponent and grind him down to submission. Bret is going to have to be a patient man if he wants to grind down Kurt Angle, who is akin to an energizer bunny. So I could see this going to the 40 minute mark, or longer!

GG: The way to beat Angle is to out-smart him or to deceive him. See Eddy Guerrero.

Big D: I think they could’ve had a masterfully paced 25 minute match with some creative submission reversals and scientific style… but damn I still can’t pick a winner here. I want them both to win!

GG: I’m conflicted as well. Kurt’s the much better athlete. But Bret has what Gorilla would call intestinal fortitude, or what Mick Foley would call testicular fortitude. Still a tough call. I think I know who I’m picking, but I’m not 100% yet.

Duan: This is the first one so far that has got us on the fence. I’m going to call it for Hart. I think, as D said, his reign was likely the more important because it established King Of The Ring as a major part of the WWE calender, and it remained that way for a long time. I also see him as the bigger star of the two, but I might be a little biased on that as I have always loved Hart’s wrestling style and he was a top guy in the period I had most interest in the product too.

Don: Angle will hit the ring like a warrior, but Bret would meet him blow by blow, and we would have a lot of ECW-esque stalemates. Bret would be the one who would slow the match down, whereas Kurt would hit him with exploder moves, whether it be quick suplexes or throws. But then Kurt would make a mistake, and Bret would clip his leg.

Alan: Perhaps Kurt is too explosive for Bret to handle. Maybe he blitzes the Hitman early. But doing that could lead to Kurt making a mistake, and nobody capitalizes on a mistake like Bret Hart.

Duan: I don’t see Kurt giving up a submission, so I reckon a quick pinning combination is the way to go. They trade holds back and forth, and when it looks like Kurt might just have him on the verge of tapping, Bret uses his veteran instincts to conjure up something and keep his shoulder down for the three.

GG: Bret was infamous for playing possum and feigning injury. I think that’s part of the finish if you go with Bret, which I think I do.

Alan: The way I see it going is that Kurt respects Bret and instead of coming out of the gate swinging, he comes out in the same mind-frame as Bret, ready for a long grueling game of chess. Kurt will have endurance on his side, but Bret will make the more cunning moves and after 44 minutes of epic action, The Hitman will prevail. Not by sharpshooter though, oh no. Shades of the 1993 KOTR Final, he wins with a Victory Roll.

GG: So we all feel that Bret ekes this one out. How could he win by submission?

Don: At one point Angle will sneak in the ankle lock, but won’t be able to stay on his feet. He’ll try holding the move on the mat, but Bret will reverse it into the Sharpshooter… and there’s your match. As Alan said, I could see this one going about 40 minutes.

It would also be a match I would tape on my VCR, then wear out the tape watching it.

We all had Hart winning a close match, but he’s the definitive winner. He’ll go to the second round and face the winner of our next match-up, which is Haku vs. Billy Gunn. 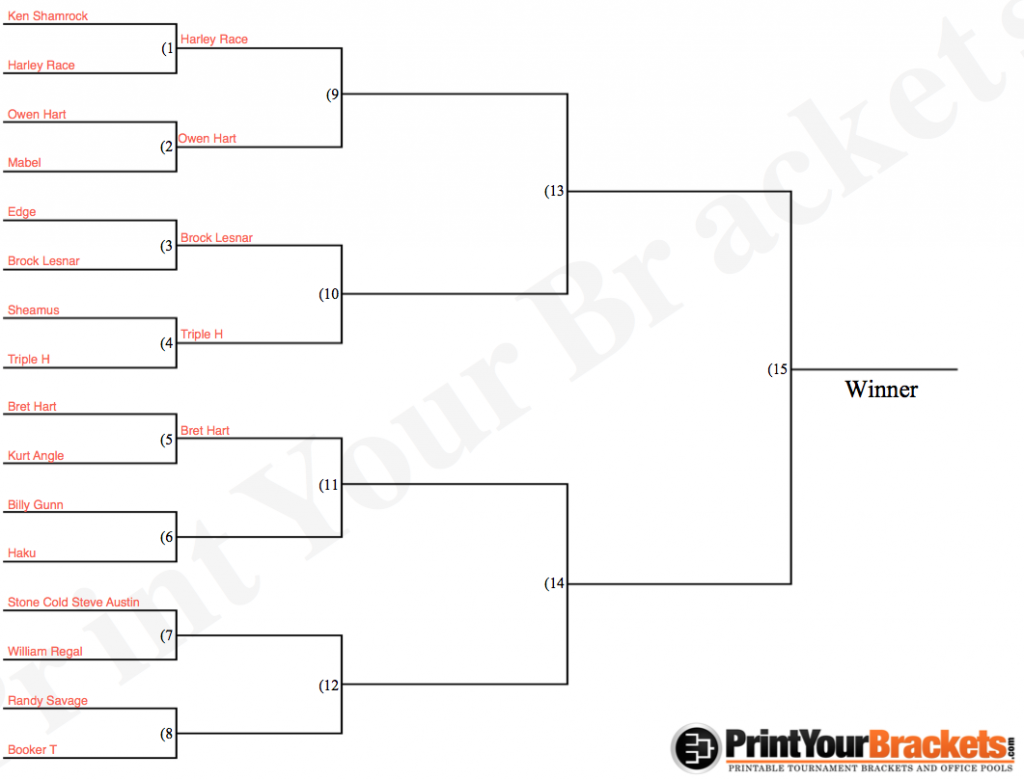