As has been the case for the last few years of Chris Jericho’s career, he’s leaving WWE for the time being to tour with his rock band Fozzy.

You can make a case that Jericho was one of the WWE’s most valuable performers in his short run which started in January this year at the Royal Rumble. As a babyface, he was one of the most over guys every night and had really strong matches. I was a proponent of making a small title run with him because the pop would’ve been ridiculous.

Jericho tweeted early in the morning on Wednesday that he was done for the time being, and probably for 2013 if I’m reading his tweet correctly.

But Jericho fans shouldn’t be too worried as I imagine he’ll be back in a similar role in 2014, hopefully surprising us all at the Royal Rumble again. 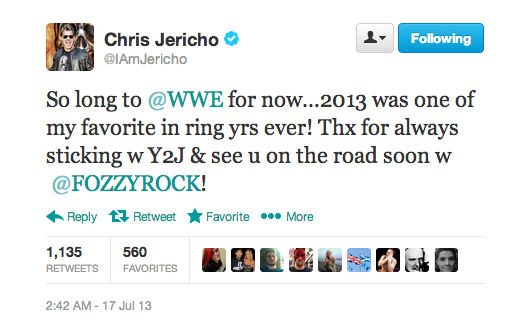