On Sunday, Mike Chiapetta reported that Antonio Rogerio Nogueira was injured and off UFC 161 because of a back injury.

UFC 161 is just under two weeks away on June 15th and the idea was to find Shogun an opponent on quick notice. All signs pointed to Chael Sonnen as the replacement. I was a little weary of posting that as fact on Fight Game Blog because the UFC wouldn’t confirm it.

Word came out late tonight that Shogun was moved completely off UFC 161 because they couldn’t find a suitable replacement. There were rumors that Sonnen couldn’t get a work visa, but one of Twitter’s MMA scoops guys, Front Row Brian said that wasn’t the case at all. All Chael needs is a passport, which he has according to Brian.

He then went on to tweet that the main reason Shogun was pulled of the show is because they wanted to instead put Shogun and Sonnen on the first Fox Sports 1 card which is in August. 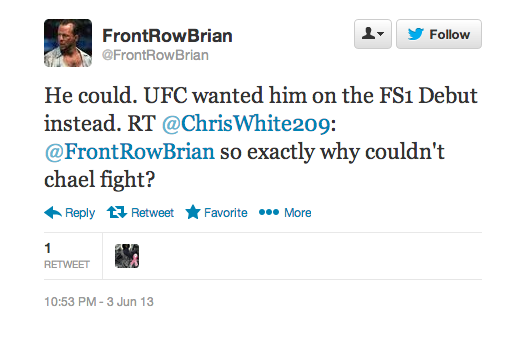 None of this is confirmed except that Shogun is off UFC 161. But Dave Meltzer posted that the UFC is targeting Shogun vs. Sonnen for the inaugural Fox Sports 1 show.