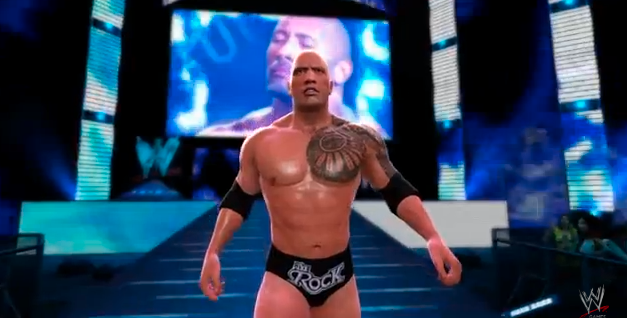 Last night on Raw, Stephanie McMahon unveiled the cover of the new WWE game under the 2K Sports banner. It wasn’t a secret that Rock was going to be on the cover, but Stephanie’s unveiling made it a certainty last night.

– The graphics don’t look that impressive as the latest THQ WWE game, but that might be because it’s still a bit early in the ball game or the trailer comes from an earlier model of the game.

– There’s definitely still going to be an emphasis on the legendary characters with The Rock, Stone Cold Steve Austin, Randy Savage, and Shawn Michaels front and center. Maybe we can get the Dragon and see a WrestleMania III rematch with he and Mach.

– They’re a bit behind the storylines as someone like Ryback has been de-emphasized of late, though, you can’t expect them to be completely on top of stuff like that.

– If you’ve played NBA 2K, you understand how important a first player experience is and with the tag lines of “Become a Superstar” and “Become a Legend”, it definitely seems as if they’re loading up a create-a-superstar model of some sort.