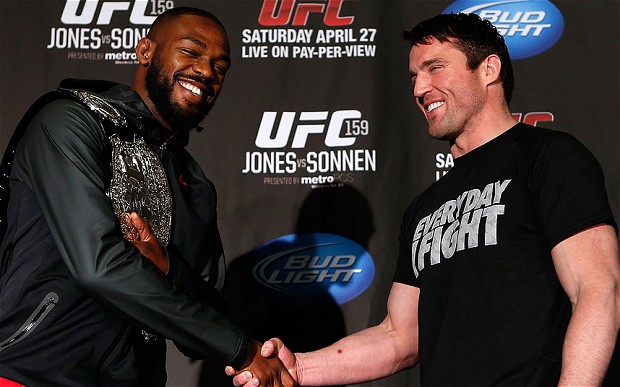 Let’s go back to last summer when Dan Henderson pulled out of his scheduled fight at the now infamous UFC 151. Chael Sonnen stepped in and agreed to fight Jones on short notice. To the surprise of most, Jones turned the fight down, Dana White cancelled the card, and the rest is history.

After White raked Jones over hot coals and called Greg Jackson a “sport killer”, there was a story that came out days later suggesting that the main reason Jon Jones pulled out of the fight is because his team thought he was being set up.

From Nate Wilcox’s post on August 26, 2012 for Bloody Elbow which featured this quote from Jones’ coach Mike Winkeljohn:

How long has Chael been attacking Jon in the media? Hmm. He’s a man known for moneymaking schemes and cheating by bending the rules. And he’s done this in various arenas. I think Chael played almost everyone like a fiddle. But I believe like a coward he tried to train and strike Jon when Jon wasn’t looking. But hey, Jon is a warrior, and he, actually we, saw it coming. All I can say to Chael is nice try.

Jon vs Sonnen. With no surprise attacks like Pearl Harbor. That’s a fight I want to see. Jon will win the war, and I think the UFC should capitalize on it.

At the time, Dan Henderson denied the idea that he let Chael know early on that he was hurt and possibly pulling out of the fight, allowing Chael to start training even before accepting the fight.

From Ariel Helwani’s post today on MMA Fighting about Sonnen explaining how the fight between he and Shogun happened:

However, on Sunday’s episode of “UFC Tonight: Fight Edition” on FUEL TV, Sonnen, who is scheduled to fight Shogun Rua on Aug. 17, admitted he was tipped off about not only Henderson’s injury but also Antonio Rogerio Nogueira’s recent injury, which led to Sonnen getting matched up against Rua.

“You know, it really got put together through Little Nog’s cowardice,” Sonnen said. “I’ve been training for Shogun for a while. I knew this was going to happen. This kind of reminds me of the time me and Dan Henderson set up Jon Jones on eight days’ notice.”

Sonnen then turned to the camera and said, “he finally admitted it.”

Now, which Sonnen do you believe?