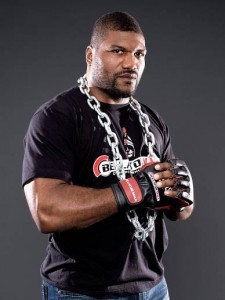 Earlier today, it was announced that Rampage Jackson signed a deal with Spike TV to fight for Bellator. The deal is similar to the one King Mo signed which enables him to crossover to pro wrestling with TNA.

It shouldn’t be much of a surprise that Bellator and Spike made a play for Rampage as he was a huge draw initially for Spike when he left Pride for the UFC, facing Dan Henderson in one of the highest rated MMA fights ever. It also shouldn’t be much of a surprise that the wrestling side of things interests Rampage. Three years ago, he co-hosted WWE Raw as a part of promotion for the movie, “The A-Team”.

Ariel Helwani asked Rampage at the time if he was interested in a future wrestling career.

He specifically said he wouldn’t be able to tour like they do in WWE, which makes TNA the proper place for him if he so chooses to wrestle. But, you wonder if this was the right move. Being under the Spike TV umbrella means that they will do whatever it takes to keep him at the top level, much like they’ve done with King Mo who lost in disappointing fashion in his first Bellator tournament fight, but is now again in a four-man tournament that was created seemingly to help him get some big wins. But from a wrestling perspective, Mo hasn’t yet done anything important with TNA.

And only now is King Mo really training for wrestling, which can have a steep learning curve for those not named Kurt Angle. Outside of Josh Barnett currently, there aren’t any folks successfully doing both at the same time. And with Barnett now in the UFC, it seems that his wrestling career will be on hold.

I wonder if Rampage could’ve received a big offer with WWE to do a storyline leading into WrestleMania which would’ve pitted him either on the side of Brock Lesnar or even against Brock Lesnar in a big wrestling match. Even if it wasn’t with Lesnar, it could’ve been with someone like CM Punk who trains in jiu-jitsu. But maybe he simply wanted to keep fighting and if that’s the case, the deal with Bellator is pretty sweet. Their tournament format restricts their booking, but they needed to make a huge splash, and this is their biggest get so far.