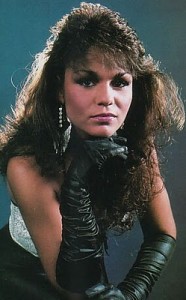 It’s been over six years since Chris Benoit killed his wife Nancy and son Daniel. It’s a day that lives in infamy and one that I’ve not really thought about in a very long time. The only times I’ve thought about it are when wrestlers such as Chris Jericho have written about it. But outside of that, I’ve tried to not really think about it, including not watching Chris Benoit matches.

However, it’s one of the biggest stories in the history of professional wrestling and when something interesting comes out about it, it’s relevant to talk about.

Dina asks Nancy Benoit’s sister Sandra many tough questions and Sandra answers them in great detail and emotion. It’s a tremendous interview and I wanted to give props to Dina and Sandra as well as share some of what I thought were the most interesting points.

When asked about the rockiness of her sister’s relationship with Chris, she wanted to make clear that Benoit wasn’t abusive with Nancy, though she may have meant that he wasn’t physically abusive with her, at least until the tragic day.

I lived in Atlanta and my sister asked me home almost every one of my days off. I want to be clear: Chris was not an abusive husband. But there were, what we call in the industry, though don’t often talk about, “high spots”. She had been there, in that position before, and refused to put up with it at all, especially with Daniel in their home. So I went with her after one of these “incidents” to file an order of protection.

She meant “high spots” to mean, “Yelling, screaming, name calling, shoving, pushing, breaking stuff,” which to most I think is abusive and in the case of shoving, physically abusive.

Sandra also wanted to get the point out about Daniel not having Fragile X syndrome.

When my sister filed for divorce, we had a legal document created that gave me custody of Daniel if anything happened to Nancy and Chris simultaneously. So when Daniel died, I was his custodian. He did not have track marks on his arms and the District Attorney made a public statement apologizing for the mistake. As his custodian, I obtained his medical records and our lawyer, Rick Decker, made a statement to the public – the only one made – letting them know that that was 100% false information.

The most interesting statement is that Sandra doesn’t believe this is an issue about concussions and thinks it was more related to “roid rage”.

First of all, at that time, the wellness policy program was ineffective. I’d like to think that it’s changed but I’m not sure it has. Everyone joked about it. There was no way Chris could have tested clean unless the sample wasn’t his. It is my understanding that “roid rage” typically does not last an entire weekend. It is my belief although I was not there that he and Nancy got into a terrible argument that escalated to the point of serious violence. In spite of what the public has heard following the autopsy reports, let me tell you that my sister was brutalized. My sister’s death was a direct result of “roid rage.” He completely lost it. The Chris Benoit I had known for a decade loved my sister so much that he would never – even in the worst episode of high spots – have hurt my sister this bad. I believe he totally blacked out. I also believe that, when he came out of it and realized what he had done, he went out of his mind. He probably couldn’t believe what he had done to Nancy. He realized what he had done and medicated even more and drank and wondered how he would explain this to Daniel. He probably became so grief stricken with his own actions that he didn’t want to live anymore. I can understand him taking his own life, especially knowing he would get capital punishment if he were tried and found guilty of my sister’s murder. However, I can’t put a reason on why Chris killed Daniel. I myself am unable to have children and my sister and Chris always made me feel better about this fact by sharing so much of my nephew’s life with me. I was very, very close to Daniel. Chris knew I would have taken care of and loved that child with everything I had. I would have kept David and Megan in his life as well and he knew all that.

There is much more in the interview and I think you should read the thing in its entirety. Sandra talks about her close relationship with Nancy, Nancy’s ex-husband Kevin, her friendship with Chris, wanting to be the cool Auntie for Daniel, Chris’ relationship with his family, and the foundation she created for Daniel and Nancy.

Check it out at The 2 Count.