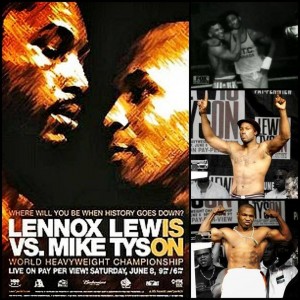 When the ESPN crew was in Memphis covering the Western Conference finals a couple weeks ago, Bill Simmons mentioned that Memphis still considers the Lennox Lewis vs. Mike Tyson superfight as the biggest sports moment in the city’s history.

Eleven years ago today, that fight happened. If you haven’t been reading Lennox Lewis’ Twitter feed, you’re missing out on some great stories, including that he made Don King buy him a car after hearing that King bought Tyson one. He also mentioned that he bought a ring for the fight because the Pyramid Arena only had a small ring and a smaller ring gave Tyson the advantage.

Many will remember the press conference that was scheduled to kick off the fight which showed Tyson at his worst. He went after Lewis, bit him, and then went off on reporters with profanity laced shouts of terror. There was one specifically where Tyson told someone that he wanted to have sex with them until they loved him, but not in such nice words.

The fight itself wasn’t really much of one. I think most boxing fans knew that Tyson was way past his prime and that Lewis’ length and height would give him just about every advantage. But people still thought that maybe, just maybe, Tyson could unleash one uppercut that could drop the big man. Well, that wasn’t happening.

I personally hoped it would happen. I wasn’t a Lewis fan, but in hindsight it was because he fought a bit safe and was a tactician, and well, also because he wasn’t Tyson.

Even though the fight was a mismatch going in, except for those who still believed in the legend of Tyson, it sold nearly two million PPV buys and is the second highest bought PPV fight in boxing history. Only Oscar De La Hoya’s fight with Floyd Mayweather topped it.

Because the fight was an HBO/Showtime dual presentation, both Jimmy Lennon Jr. and Michael Buffer introduced their company’s guy; Lennon for Tyson and Buffer for Lewis.

The fight saw Tyson trying to bully his way around the ring, but Lewis was just too big and strong. The story of the fight was Lewis taking the heart away from the bully. By the end of the fight, you only felt sorry for Tyson who looked like a shadow of what he once was.

You can watch the full fight below:

The post-fight interview was bizarre as Tyson was calm, but also basically at Lewis’ mercy, requesting a second fight ($), even though he was completely out of his league at this point.

What was much better than the actual fight was the HBO documentary show, “Legendary Nights” focused on Tyson and Lewis. Ralph Wiley was really the star of the show, giving a lot of insight as to what Tyson was going through and how much quit was in him after he figured out Lewis wasn’t scared. Tyson would go on to say the same thing after the fact.