The show was built around Bret Hart Appreciation Night, only, the ceremonies weren’t available on TV. Instead, you had to download the WWE app to watch. I refused.

In my favorite segment of the show, Paul Heyman was Chris Jericho’s guest on the Highlight Reel. Heyman reminded everyone that Jericho was at one point, a Heyman guy (even though his ECW stay was short). Jericho reminded Heyman that he owed him money. Heyman said he would waive his fee for showing up and they’d call it evens. That was awesome.

Big D mentioned to me that Punk was going to be cheered wildly, which is why Jericho is so perfect. Jericho understands how to work that kind of crowd and he won’t get flustered. I think it’s the perfect match and makes Payback interesting, which was hard to say after the first segment.

John Cena vs. Ryback is now a 3 Stages Of Hell match.

John Cena came out to start the show, no worse for the wear from being out last week. He wanted the match changed from an Ambulance match to a 3 Stages Of Hell match, with the Ambulance match as the third fall, which really gives away that there will be a third fall. Then again, the entire premise of the match gives that away.

Ryback came out and cut one of the worst promos this year, over-enunciating his words to a terrible degree. He threw out every word used for devil, yet couldn’t pronounce Lucifer correctly with those huge teeth of his. An Ambulance match was bad enough as a stipulation and now, we get a Lumberjack match, a Tables match, and an Ambulance match which means that this is probably going to be a bad match. I think they’d be able to use enough gimmicks to make a one-fall match interesting, but three falls? How much repetition will there be in this match?

Cena also faced Curtis Axel in a nothing match. An ambulance drove through the entrance though Ryback wasn’t driving it. I think it was K.I.T. from Knight Rider. Ryback attacked Cena and then Cena was counted out. When Cena heard the decision, Cena smiled and that’s how the show went off the air. So Axel has beaten Triple H and Cena now by count out. He’s the new Genius Lanny Poffo!

The Shield continues to dominate.

Deam Ambrose went over Kofi Kingston again and Seth Rollins and Roman Reigns beat Daniel Bryan and Kane in another great match. I wonder if they’ll create a stipulation for another match at Payback. Since the World Title match at Extreme Rules was changed from Ladder match to a Submission match when Ziggler got hurt, I can see them adding the Ladder stip to a rematch. It could be pretty amazing. 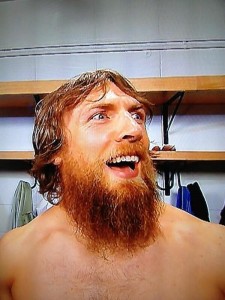 I found the show to be okay, but it’s another one of the take the good with the bad. Or maybe take the bad with the good. There were some great segments but they were littered with some bad ones.