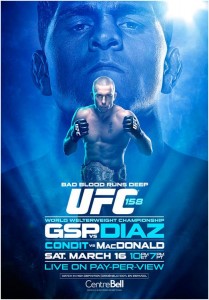 This one has been quite a long time in the making. And it’s finally here. We previewed the show yesterday. Will Georges St. Pierre put himself into dangerous spots with Diaz? Will Diaz be able to get him in those dangerous spots? You know what Diaz is going to say to Georges, “Don’t be scared homie.”

1. Colin Fletcher vs. Mike Ricci
I was only able to see bits and pieces of the fight. Ricci used his jab and good boxing and battered Fletcher a bit to the point of bloodying him around his eye. Ricci was also working the takedown game and won a decision.

2. Chris Camozzi vs. Nick Ring
Really sloppy striking probably because they both are southpaw and not used to facing other lefties. Ring was more varied with his strikes, especially his leg kicks. He’s also the quicker fighter and getting him first.

Better round for Camozzi, especially late, but still a close round. He’s hitting Ring more as Ring’s face is cut up a bit. Camozzi is throwing an overhand left and Ring also ate a knee late. Ring is still beating him to the exchanges.

Ring may have lost this fight in the second half. He looked like the fresher and more athletic fighter, but Camozzi has hit him with the bigger shots which has slowed Ring down. The decision will be interesting.

3. Nate Marquardt vs. Jake Ellenberger
Marquardt caught Ellenberger early and tried to keep the pressure on him. Ellenberger followed up with a big punch and then caught him again and finished him. Marquardt went limp for a second.

Winner: Jake Ellenberger by way of 1st round TKO

4. Johny Hendricks vs. Carlos Condit
Hendricks is throwing that left hand right out of the gate, and landing. He nailed Condit at least twice and kept throwing it. Condit was trying to get away from it, but Hendricks stayed on it and then when they’d get close, Hendricks would take him down. Condit did well off his back. Condit is amazingly unfazed and dishing it out. He’s taken some nasty left hands though. He stung Hendricks with a front kick.

What a round again. Condit is in amazing shape and has taken a ton of punishment and still has a chance to win this thing simply because he’s so composed and hasn’t changed his game plan, which has been to stand with Hendricks and outstrike him. He’s gone after a couple submissions, but other than that, he’s stood toe-to-toe with him. But he’s been on his back because of flying knee attempts. What’s going to be interesting is how they score Condit’s offense off his back.

Amazing finish. The last minute was insane. I think Condit may have won the last round. It was a very similar round as the second, but I think Condit did an even better job off his back. I’d have Hendricks 2-1.

5. Nick Diaz vs. Georges St. Pierre
Easy round for GSP. Diaz threw a jab and left hand combo, missed and was taken down. GSP absolutely owned him on the ground. He tossed him like he was a child. GSP was out-techniquing Diaz on the ground. Diaz was embarrassed down there and when the round ended, he went after him a little bit. Diaz has to be frustrated.

Yet another easy round for GSP. Nick was even outstruck on the feet before GSP took him down. When Nick threw his left, GSP connected with a counter left hook. GSP landed some nasty elbows on the bottom. Diaz is clearly upset at not being able to stop anything.

Diaz was actually landing a little bit late in the round before being taken down. Otherwise, GSP was actually winning the exchanges. He stood up with Nick most of the time and won the round that way, outside of two takedowns.

Diaz had a really good round, but no urgency. He was winning a lot of the standup including kneeing in the clinch, but GSP got two takedowns, including one that was nearly a rock bottom. The Rock would’ve been proud. Nick’s round if not for the late takedowns.

Nick took himself down by missing a high kick. Nick must be waiting for the sixth round or something as there’s no urgency. GSP took him down and nearly put him through the cage. There wasn’t a real emphasis by GSP to finish the round.

Monday MMA Round-Up: An early ‘Fight Of The Year’ contender?

Guide to UFC on ESPN 32: Kattar vs. Chikadze