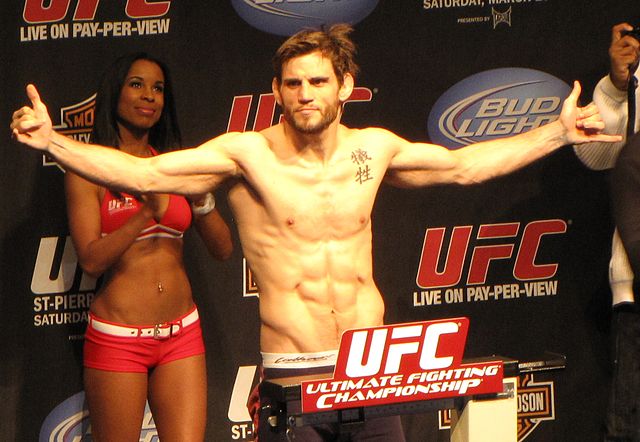 Steve Juon has been a friend of Fight Game Blog for many years now. He will be contributing MMA columns from time to time. And here’s his first one on being part of the UFC Rankings panel. Welcome Steve!

I have been writing and rewriting this editorial in my own head since Sunday. This weekend I officially became part of the UFC Fighter Rankings panel as a reporter for the Wrestling Observer, the site I most frequently write for when covering UFC and MMA events. In fact I cover UFC routinely enough for the Observer now that I even changed my Twitter profile to reflect that fact, but that’s beside the point. The reason I started mulling over an editorial was due to the knowledge UFC would publish the rankings both collectively and by panelist. It’s one thing to simply rank fighters based on your own set of criteria. It’s another to have those rankings put under a microscope. I knew the MMA community would want justifications for who was ranked and why.

Today’s news that Jon Fitch was released by Zuffa/UFC turned my apple cart upside down before I could even put these words into print. Voters this weekend had an initial set of rankings to work with, to adjust as they see fit, to add or remove men from the top ten as needed. Fitch came in ranked #9 in the Welterweight Division. As you’re no doubt aware, Fitch lost to Demian Maia at UFC 156 in a grueling three round battle where many writers quipped he had been “out-Fitch’d” – taken down and controlled throughout the fight. Fitch gamely fought off all of Maia’s submission attempts though, which in itself is a feat, when you consider that Maia is a world class ranked black belt in jiu-jitsu. Still for a fighter who had only lost 2 times since 2003, it was a humbling defeat, one which would be cause for Fitch to reevaluate his career.

When Maia was ranked above Fitch when the initial ratings came out after UFC 156, this seemed both fair and justified to me, and I didn’t see much cause to adjust it. Given his previous track record I felt Fitch was still a top ten UFC welterweight despite the loss to Maia, and one of my subjective criteria for rankings is that wins over other ranked fighters will either keep your standing (if there are contenders ahead of you) or improve it (if you beat a guy above you). Maia seemed solid for me at #5 so I kept him there. I made a few minor changes in my welterweight voting – I pushed Rory MacDonald up to #3 over Nick Diaz since his rematch with Carlos Condit (#2) would most likely determine a title contender.

(Little did I know last weekend when I voted that Rory MacDonald would go down due to injury and that Hendricks would take his place – creating an even bigger contender fight by accident. Instead of #2 facing #3, #2 is now facing #1, and I had Hendricks and Condit #1 and #2 both before and after submitting my vote.)

As I went through the division I switched Kampmann and Ellenberger since the former holds a win over the latter. Despite the two having never fought, I felt reasonably sure Fitch could beat Koscheck, a ranking I was prepared to adjust if Koscheck beat Robbie Lawler convincingly at UFC 157 this Saturday. If Koscheck lost, he probably wouldn’t even be a top ten guy any more, having lost 3 out of 5 and his only two wins being against non-ranked fighters. Then again Lawler’s track record of late is middling at best, having only won 3 of his last 8, so Koscheck was seemingly being given a fight he could win to improve his standing and work his way back to title contention.

With today’s news that UFC cut Jon Fitch, some of the choices I made now feel nullified, much as Fitch must have felt when he was being outwrestled by his Brazilian opponent. The UFC ranking system has a built-in limiting factor in that you can only rank fighters under contract to Zuffa. For example – if you consider Bellator Lightweight Champion Michael Chandler one of the top ten lightweights in the world today (and I do), you can’t put him on the list until Zuffa lures him away to UFC with a better money offer than Bellator has him signed to currently. Even if there are other worthy welterweights in other organizations, I had Jon Fitch in my UFC top ten for precisely that reason – he’s one of the ten best welterweights under UFC contract – or at least HE WAS.

Obviously when the rankings panel opens up again on Saturday night/Sunday morning after UFC 157, Jon Fitch will no longer be on the list. As artificial as this seems to me, it is their ranking system and their rules, and as a participant in it I will respect it and find a new welterweight to put in his place. And yet as a voting member of the panel, I will still have in the back of my mind that only 7 days ago I considered Jon Fitch one of UFC’s ten best, and the fact that they cut him really doesn’t change that in my mind. If he had suffered another bad loss and dropped out of the top ten altogether, perhaps it wouldn’t seem so odd. Quite possibly though the UFC fears the very notion that Jon Fitch just won’t go away – he’d beat a ranked guy or a guy on the bubble of the top ten, but then he’d lose to a guy like Kampmann or Ellenberger.

Fitch has been called a “gatekeeper” by some critics for years, and it’s conceivable UFC doesn’t want to keep a guy around who would always be in the top ten but either never get close to a title shot or never drop completely off the radar. From a booking standpoint Fitch’s toughness and grit has to be frustrating – but from an objective sportswriter’s opinion, cutting him is just as frustrating. Fitch has been handed a parting gift by the UFC – the overall panel as of right now still ranks him #8. Whoever signs him should pay handsomely for a guy who until Saturday was considered one of the ten best welterweights in the world – or at least in UFC’s world. Therein lies the rub – Zuffa’s UFC is the #1 MMA promotion in the world hands down. They would argue anybody in their top ten is better than any champion in the same weight class who fights anywhere else. Jon Fitch will be the first prominent fighter to challenge that assertion if and when he debuts somewhere new.