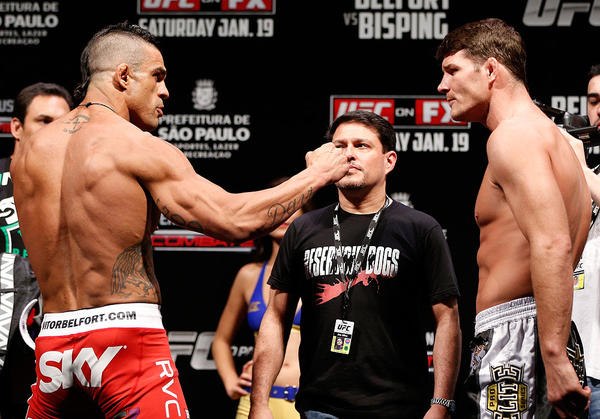 This show comes off the heels of the Bellator debut on Spike TV and right before the new season of The Ultimate Fighter and also kicks off several weeks in a row of UFC shows, including next weekend’s UFC On Fox show which will probably get some publicity during this weekend’s NFC Conference Championship game.

Damn. Nurmagomedov caught Tavares with a lunging uppercut and blasted him with elbows to the side of his head until the stoppage. Tavares probably took 5-10 too many shots there as he wasn’t defending at all.

Winner: Khabib Nurmagomedov by way of 1st round TKO

Gonzaga was successful with the lead right hand and wobbled Rothwell with one of them. Also had success dictated where he wanted to go with his leg kicks.

Second round was more of the same and Gonzaga sunk in a guillotine that made Rothwell tap out.

Winner: Gabriel Gonzaga by way of 2nd round submission

After two minutes of not much happening, Sarafian exploded with a right hand and put Dollaway down. Dollaway instinctively tried to hold on and take him down. Back on the feet, they traded punches, but Sarafian was in and out too much for Dollaway to do much damage.

Sarafian landed another right hand that knocked Dollaway to the ground. He keeps going for a reverse round-house that’s way too slow. Dollaway is having more success at getting inside with left hooks. Once Dollaway walks inside, he usually takes a shot. Dollaway stole the round with a lunging uppercut that put Sarafian down and the round ended before he could finish him.

Dollaway was winning the round and on top of Sarafian, but Sarafian swept him. Dollaway was really tired and Sarafian was trying for the rear naked choke. Dollaway reversed position and was back on top. Some crazy reversals at the end of the round. Third round is a close one.

Sounds like two judges gave Dollaway the last round and only one for Sarafian.

Belfort is still heavily muscled at 185, but he looks kind of small. I expected him to be bigger. Most of the round was like a bad dance where neither guy did anything with any rhythm whatsoever, but Belfort caught him late with a kick that wobbled him. He was on his horse late getting away from Belfort before the round ended.

Vitor caught Bisping with a left high kick and Bisping went down hard. Belfort followed it up with punches on the ground. Not so sure Bisping was out, but it was stopped.

Winner: Vitor Belfort by way of 2nd round TKO