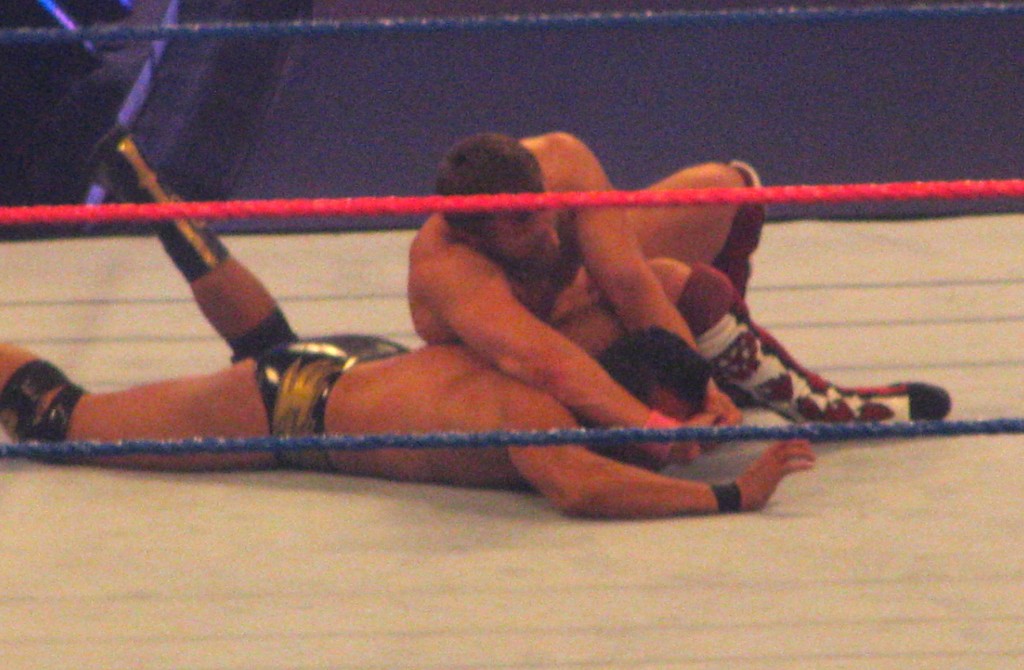 I attended Smackdown in San Jose last night with my buddy and my kids and the show was LONG. They taped four different shows. First was Superstars, then The Main Event, then one match for Saturday Morning Slam, and finally, Smackdown.

You can see photos from the night on our Facebook Page.

Wade Barrett beat Tyson Kidd in a fun match. Kidd got a lot of offense in and Barrett won with the elbow of death. 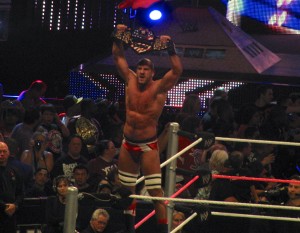 Antonio Cesaro beat Justin Gabriel in yet another fun match with his stuff pedigree-like maneuver. It was clear to me watching both Kidd and Gabriel live that they need to be on Raw every week.

The Big Show beat Randy Orton after a chokeslam. This match was painful to watch. There were three rest holds and the bear hug spot seemed to last hours. Orton got at least two comebacks, but with Orton’s normal slow working style and Show’s plodding style, the match was terrible.

Kofi Kingston quickly beat Michael McGillicutty. Since Miz is one of the announcers, he was there and Kofi challenged him to a title match as the main event of next week’s Main Event. The highlight was Miz’s velvet red jacket.

Brodus Clay beat Cody Rhodes after a big splash. The best part of the match was Cody’s dancing. He did the Carlton dance, which if you remember, was a staple of The Fresh Prince Of Bel-Air. The match wasn’t good, but you should go out of your way to watch the show just to see Cody’s dancing.

The show opened with a wacky test of powerful finishers. Booker T came out to introduce Sheamus and the Big Show. He wanted to measure the power of their finishers and had what looked like a speed bag out. But it wasn’t a speed bag. It was a bag that measured the power of their finisher. Sheamus’ kick was first. Show was second. Show won. It was dumb. 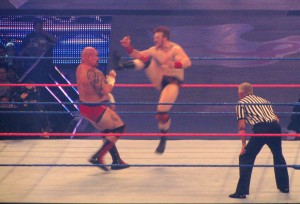 Tensai attacked Sheamus and that led to a match that Sheamus won with the Brogue Kick.

Jinder Mahal and Heath Slater beat Zack Ryder and Santino. Slater, Mahal, and Drew McIntyre are “A Band” and did a wacky air guitar dance that was kind of fun.

Kane beat Dolph Ziggler by DQ. This match will need to be edited fairly heavily. They were not on the same page. Ziggler used his briefcase to hit Kane and the referee saw it. Daniel Bryan came out to “save” Kane even though he didn’t need saving. They argued and Matt Stryker came out to interview them. Bryan put the No Lock on Stryker and then Kane choke slammed him.

The Big Show (again!) beat Kofi Kingston quickly with the Knockout Punch. Miz was on commentary.

Kaitlyn and Layla tried to tell Booker that Eve was the one who injured Kaitlyn and she used a blond wig. Eve blamed Teddy.

Sin Cara beat Damien Sandow. I only counted two screw ups for Sin Cara, though nothing was really all that smooth.

Alberto Del Rio beat Daniel Bryan with an arm bar in the best match of the night. Bryan was over like a babyface in San Jose. Bryan put on the No Lock, but Del Rio got out of it before tapping quickly to the arm bar. Del Rio cut a promo on Orton and then Orton came out and beat up Ricardo as Del Rio bailed.

Halloween Havoc Preview: Glancing Back & Looking Ahead To Spin The Wheel, Make The Deal

Hell in a Cell Recap: This Time, It Makes Sense!