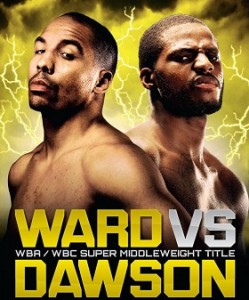 Chad Dawson vs. Andre Ward to me is all about style. I guess you can say that about nearly every fight. If this were a NFL combine, Chad Dawson has all the numbers that make you ooh and ahh. He’s taller, longer, rangier, and probably quicker too. But Ward seems to have the intangibles.

Andre Ward is a dictator. He sets the pace, makes every fight his fight, and absolutely doesn’t give in. Chad Dawson may be a more talented boxer overall than Ward (and we all remember that famous Floyd Mayweather praise), but I don’t see that doggedness in him that I see in Ward. In a game of fight or flight, which boxer do you trust to buckle down? That’s advantage Ward.

The one thing that used to dog Ward a little bit is his chin because of a being hurt early in his career against lesser fighters including a knockdown to Darnell Boone. But after facing the likes of Arthur Abraham, Edison Miranda, Mikael Kessler, Carl Froch and Sakio Bika and making it out relatively unscathed, you don’t hear about it much.

For Dawson (and for Ward too), it’s his inability to finish fights. He’d rather use his high skill to outpoint his opponent in a rather methodical fashion, which is completely his prerogative. He stays outside, landing shots that don’t do too much damage, but are enough to win round after round. Ward uses brute force and controls the inside, suffocating his opponent. Will it be Dawson’s outside game or will Ward be able to close the distance and make Dawson uncomfortable on the inside? While I think Dawson has a good shot to steal some early rounds, I do think Ward wears him down and eventually breaks his will, leading to a clear decision victory.

Duan has a similar prediction. He thinks Ward takes no less than eight rounds.

“I think this one ultimately comes down to control. Ward controls – that’s what he does. Even when he drops rounds, he’s still the one dictating the terms. He doesn’t allow momentum turn against him. His temperament remains in tact and he greets the next bell like it’s the start of a new fight.

Control is something Dawson gives up all too easily. He drifts in fights, he shows frustration, and he can be unsettled. He boxes well to a strategy, but when the fight dynamic changes, he tends to be slow to adjust. He lacks that extra gear needed to stamp his authority back on an opponent.

Surrendering control against Ward is suicide. The guy will give up nothing, and I can’t see Dawson ever finding a real foothold in this fight.
Ward is one of the best bullies in the sport. He’s been able to do it against the roughest and toughest at super middleweight; he will be able to do it against Chad Dawson too.

Ward will smoother him up close – there his longer arms become more of a nuisance than an asset. I think you will see Dawson look to the referee for help early, but he will be unlikely to receive any. He will struggle to get his shots off on the inside, frustration will creep in, and this fight will drift further and further away from him. I’m expecting this one to end pretty one-sided.”

We’ll have play-by-play of the fight later tonight.