With September being the month of the infamous Wrestling Observer Hall of Fame honoring the greatest names in the history of the business who made a difference, its kind of sad that many people who DO deserve it will be left out (see the Rock N Roll Express, Dick Murdoch, Arn, Sting. etc). But what about those journeymen who, maybe didn’t sell out the Garden or the Tokyo Dome, or even the ECW Bingo Hall, but still hold a place in the hearts of many.


Today I want to talk about Pat Tanaka.


Patrick Tanaka is a guy who I feel is unfortunately forgotten in the modern era, but was a staple of my childhood. Historians will remember him primarily for his run in the AWA as part of Badd Company, 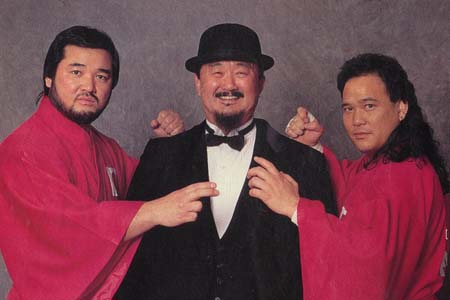 and Karl Stern-ish southern fans will always bring up his run in Continental Wrestling, including his victory in a handicap match over Mark Starr, whom he’d reunite with during the WCW Monday Nitro era in a stable I affectionally called “The Axis of The 80s”, featuring stars of the 80s who were essentially, jabronis to the stars, featuring the Armstrongs, Mike Enos, Marty Janetty, and their leader: Greg “The Hammer” Valentine. Jim Powers was NOT a part of his group because unlike the rest of these guys, he was ALWAYS a jobber.


But I digress.
Pat Tanaka teamed with Sato in the WWF to form the Orient Express, a tag team that the Alan4L’s and Big D’s of the world will always love. I liked watching Pat in the WWF on shows like Wrestling Challenge and WWF Superstars, and I grew fond of him. Not even trying to be funny here, but when I watch any of the classic Coliseum Videos and see the Orient Express, I’d legit get excited. The biggest profile win of their career happened at Wrestlemania VI, when they defeated the icon Shawn Michaels and Marty Janetty – The Rockets – via countout. Shortly after the summer of 1990, Sato went back to Japan and was replaced by the masked Kato, played by Paul Diamond, who was NOT Japanese. Diamond was Tanaka’s tag partner in Badd Company, so they had ready-made chemistry. Paul Diamond would also take Konnan’s gimmick of “Max Moon” in 1992. Paul Diamond was great at playing anything not-American despite resembling Asher Roth. The absolute apex of Tanaka’s career would be at the 1991 Royal Rumble where he’d get his big rematch with the Rockers, this time with Max.. err… Kato, and have what is STILL considered one of the absolute best WWF Tag Team Matches of the 90s AND match of the year. Joe Gagne once blamed this match for the decline of kids school grade point averages. With the last name Gagne, you KNOW he’s not kidding. The following year, Tanaka and Kato would have ANOTHER fantastic match with the New Foundation, the short lived team of Jim Neidhart and “The Rocket” Owen Hart.

Here is the Orient Express vs. The Rockers from the 1991 Royal Rumble. MUST-SEE!

Yes, he came out to Jim Johnston’s “Random Generic Asian WWF Theme” used by MANY MANY MANY others in the future, including Bull Nakano, Aja Kong, Shinobi the Ninja, and many others. Quite racist.

Pat Tanaka had a tough time in WCW though. He and Diamond basically re-created the Orient Express gimmick (without Mr. Fuji of course), but couldn’t call them that because WWF owned the name and Jerry McDevitt is more frightening than ten Anderson Silvas. Rumor has it that Matt Bloom wanted to name them “The Slants”, but WCW Standards and Practices stopped that. So sadly they went their separate ways and times got tougher for Pat. First, he was told to portrayed a ridiculous gimmick known as “El Gato” to lose to Konnan… the ORIGINAL Max Moon (see how everything ties together?). For those who don’t know, El Gato means Cat and a synonym for cat is pussy. Therefore, his name was El Pussy, which really doesn’t give the fans much to get behind. Then, deep into the Nitro era, more bad news. This young upstart, who many vowed would never draw a dime in this business or mean jack, Bill Goldberg, stole his theme music, which angered Pat quite a bit and led to a match on Nitro where poor Pat was squashed by the gigantic jewish ex-NFL star.

Here is Pat Tanaka coming out with HIS THEME SONG NOT GOLDBERG’S, to battle Glacier, a phony, wannabe member of the Orient Express.

But you know what, regardless of anything, I still love Pat. Since David Meltzer loves to obsess with the connections between wrestling and MMA despite there not being as many as his propaganda claims *deep breath*… Pat DOES have a tie. In 2006, Pat started Fighting Spirit Dojo in Ohio, training Judo to more than 50 students. Rumor has it that HE recently took Chael Sonnen under his wing after his loss to Anderson Silva, which explains why Jon Jones bailed. Still, Pat is a great worker from my childhood, who will likely never make the Observer Hall of Fame, but is a must for the Big D Coliseum Video Hall of Fame of Greatness, alongside The Berserker, Virgil, and Kamala.