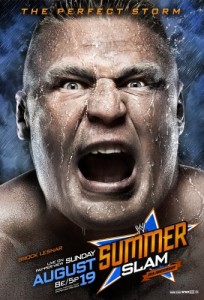 WWE’s event of the summer is upon us, with the 25th anniversary of SummerSlam giving us plenty of star names and big matches. With both World Titles on the line, the Tag Team Championships, the Intercontinental and EVEN the United States Title, this is the true night of champions, and the WWE perhaps going in the right direction.

Oh, and “the most dominant force to step into the WWE ring” Brock Lesnar is looking to follow up on his last “fight” with John Cena, taking on a man with a huge personal vendetta against Lesnar, Triple H.

Let’s go over the show, match by match, in my predicted order.

Of note, Santino Marella has been US Champion for 166 days, a longer reign than such names as Eddie Guerrero, Diamond Dallas Page, Tully Blanchard, Dusty Rhodes, and even Paul Jones.

Antonio Cesaro, formerly Claudio Castagnoli of “indy wrestling” fame, has the look and theatrics that the WWE loves, surprising none of Claudio’s fans.

It’s amusing to see the US title up for grabs between these two men, as Antonio Cesaro has teased turning the US title into the retired European championship, which would be very fitting (and quite great) for his character.

WHO SHOULD WIN: Santino Marella. Why? This is a YouTube match. There’s not going to be too many people watching. If/when Cesaro wins the title, it should be a big deal and on Pay Per View. Of course…

WHO WILL WIN: Antonio Cesaro. Because Santino has held the title since March 5th, a great trivia question would be “Who is the current United States Champion?” With so little hype the title has received with Santino as champion, giving it to Cesaro will up the title’s recognition.

Dolph Ziggler can’t win the Big One. He says Chris Jericho (who has won the Big One multiple times) doesn’t have what it takes to win the Big One. To see Ziggler’s point of view, he sees Jericho as a man who comes to the WWE, can’t win, leaves the WWE, returns and can’t win again, then leaves again. Now he returned late last year, made a huge splash with a flashy jacket… and still can’t win, even with multiple title matches this year.

As for Dolph, he is one of the most talented men in the WWE who has not had a true title reign, but will be a World Champion very soon. What? You say I said that last year? I’ll keep on saying it until it comes true.

WHO SHOULD WIN: Dolph Ziggler. This should be one of the better matches on the show, which is how SummerSlam usually kicks off. Ziggler needs a big push here. I wouldn’t be surprised if he and Vickie end up on opposing sides by the end of this fight.

WHO WILL WIN: Dolph Ziggler. Chris Jericho isn’t long for the WWE, with his band Fozzy planning a tour next month. But even if he wasn’t, Ziggler is the man on a role. Jericho still can’t figure out what his character is, bringing back old catchphrases from a dozen years ago.

Okay, I have to admit that I am a huge fan of The Primetime Players. I thought their former manager Abraham Washington (aka AW) was not a good fit, and they did their best work before (and now after) AW. The moves, the dance, the millions of dollars, millions of dollars. The gimmick just makes me smile. Plus, as an NXT watcher in the first season, I rather enjoyed Young and O’Neil and was hoping for the best for them.

R-Truth and Kofi Kingston are stuck in the WWE rut. Let’s throw them together as a tag team to give them something to do. Heaven forbid these two good workers and performers get pushed up the midcard to feud for the US or IC title.

We all know about the diluted WWE tag team scene, which is why I’m excited over a title match on SummerSlam. SummerSlam! I am a huge tag team fan from the 80s and 90s, and always looking forward to the rise of the tag team division again.

Kane is a big monster who will have the same matches, and receive the same push year after year until Glenn Jacobs decides to hang it up and become a Libertarian radio show host as Citizen X.

Daniel Bryan is the highlight of any show he is on, to which we have John Cena to thank. That may be a stretch, but Cena did push to have Bryan re-hired after “Tie-Gate” a few years back. That may have been all storyline, but I’ll still take it.

Kane is usually in the most boring matches on the show, but he is big and scary so that’s okay. Daniel Bryan can spend the majority of this match running around and looking scared, but at least he’ll have the crowd into the match. Yes? No! Yes! No!

Bryan believes he should be in the title picture, and it’s surprising to me that’s it’s actually surprising that he isn’t part of any title match on this show.

WHO WILL WIN: See “WHO SHOULD WIN”.

Miz has a new haircut, which I’m a big fan of. He’s also a bit more serious in the ring, and isn’t being pushed as a joke. He’s perfect where he is right now, raising the status of the Intercontinental Title.

Rey Mysterio is back and looking good, which isn’t surprising as he’s slowed down his matches considerably. Which is a good thing, due to his age and injuries. Which, again, is probably why Mysterio is better suited to be a tag team wrestler these days. Get Sin Cara on line two!

This should be a good match, but Mysterio isn’t the “first match on the card cruiserweight style match” guy he used to be.

WHO SHOULD WIN: The Miz. I can see him being the Intercontinental Champion for awhile, until a new up-and-comer (Rybeck, anybody?) takes him down.

WHO WILL WIN: The Miz, for the same reasons.

Finally, Alberto Del Rio gets his match. And like last year when pinned CM Punk to become the WWE Championship (well, after Punk was laid out by a Kevin Nash powerbomb and Del Rio cashed in his Money in the Bank contact, but I digress), Del Rio has a chance to go two for two.

This match was on-again / off-again as SmackDown GM Booker T took the match off the SummerSlam card a few weeks ago due to Del Rio using more than underhanded means to get the best of Sheamus.

As for Sheamus, he’s been the greatest / dullest World Champion since Randy Orton. The good thing about this match is Del Rio trying his best to pull emotion out of Sheamus. We’re not going to have an 18 second match this time around… right?

WHO SHOULD WIN: Alberto Del Rio. The man is championship material and will make great foil for any babyface shooting for the title down the road. There just aren’t many heel World Title contenders on Smackdown for Sheamus.

WHO WILL WIN: Sheamus, the smiling babyface who isn’t a bully, really.

Everything I say about this match/fight is going to be a repetition of what you’ve read anywhere else. But all it boils down to is this — Brock Lesnar needs to win. This is reminiscent of many underhanded ploys you’ve seen from bookers anytime in history. You leave and you make a name for yourself somewhere else, when you return you’re going to lose to everybody.

Triple H is the frontrunner to be The Man in WWE in the years to come. He will be the Vince McMahon of the promotion, but the big difference between the two is Vince wasn’t superhuman. Neither is Hunter, as you’ve seen him lose to the Undertaker at WrestleMania, and then get his arm broken by Brock a few months ago. But this is the same Hunter who booked himself to defeat former World Champion CM Punk at last year’s “Night of Champions” Pay Per View.

Brock Lesnar lost to John Cena in a match that was my favourite of the year so far. He was big, he was scary, and he was destroying Cena. Cena had no chance. But somehow he managed to squeak out a win after hitting Lesnar with a chain, then his finisher, the AA, on steel steps.

This match is personal, with Lesnar not only breaking Hunter’s arm, but also Shawn Michael’s arm, the Spock to Hunter’s Kirk. Or the other way around, I’m not sure.

This will be a very physical match, but probably more of a “wrestling” match than the Cena/Brock fight, and Hunter’s limitations.

WHO SHOULD WIN: Brock Lesnar. If he loses this match, he loses his credibility. Although the WWE will make money with each Pay Per View poster that has his face, mainstream fans will start the head scratching question of “Why can’t this real fighter beat a fake wrestler?”

WHO WILL WIN: Brock Lesnar. It won’t be as clean as we’d want it to be. We wanted to see Lesnar destroy Cena and pin him in the middle of the ring. I’d like to see that happen this time around. If it does, I will eat my shoe.

Brock Lesnar is the only thing you see on the SummerSlam poster, so I wouldn’t be surprised if the WWE Championship Match went on second to last.

This match has a lot riding against it, but there are a few nuggets of storylines if you’ve managed to stay awake.

– Champion CM Punk has held the title since last November, and is looking to hold the title until Royal Rumble, to which the WWE Champion will have a date with The Rock
– It’s been almost a year (gasp) since John Cena has held the WWE Championship, and he also became the first person to unsuccessfully cash in a Money in the Bank contract
– Big Show should have been one of the greatest stars in WWE history if he had been booked like Andre the Giant. But he wasn’t, and it all started with the name “Big Show”. Really? He’s won the title a few times, but hasn’t held the title for all of three months. If he is looking for the last big run of his career, it needs to start soon.

As I mentioned earlier in the Fight Game Blog SummerSlam preview, this match isn’t looking to be anything special, but will do a lot to put the WWE Championship over.

WHO WILL WIN: CM Punk. But I wouldn’t be surprised if, as I mentioned earlier, the WWE brass is getting itchy palms with John Cena not holding the title.