You only get to the 1,000th episode once right? Well, technically we only get to episode 238 once too, but still. WWE has been pulling out all the stops for this show, including bringing back greats like Shawn Michaels, The Rock, The Undertaker, and Steve Blackman.

We’ll do it time capsule style.

8:00: The show starts with a music video of Raw moments including some great ones (Mike Tyson and Stone Cold) and some not-so-great ones (Goldust stuttering while Triple H laughs his ass off). What these guys deem as entertaining is mind-boggling. 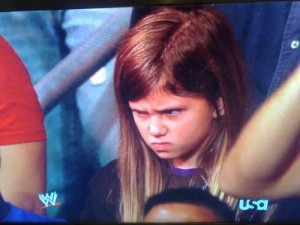 8:02: Bret screwed Bret and Shawn Michaels losing his smile in back to back edits?

8:11: After three minutes of underwear jokes from HBK and HHH as DX, they introduce other members of the team, except the one with the largest member, Chyna. (See, I go DX when I need to.) Billy Gunn is still pretty jacked. The Road Dogg presented the New Age Outlawz as the 5-time tag team champions of the world. Triple H asked us if we are ready. And then he said the line that hasn’t ever made sense, “Let’s get ready to suck it.” Damien Sandow interrupted because you know, he and DX had quite the run in 1998. He was put out to pasture and Billy Gunn said that if we’re not down with that, he’s got two words for us. Poor X-Pac didn’t get to do anything except crotch chop Triple H when H said he was the only one with a full head of hair left. No bronco buster or anything. That’s what he gets for humping Chyna on camera.

8:34: It looks like rather than announce the main event, Jim Ross announces what might be the best match on the show. Sin Cara, Rey Mysterio, and Sheamus vs. Chris Jericho, Alberto Del Rio, and Dolph Ziggler. Didn’t Ziggler and Jericho have heat last week?

8:36: Jericho gave us his first, “Come on, baby!” cover in what seems like 10 years. A t-shirted Mysterio didn’t get to do much as it was all Sheamus. Ziggler sucker-punched Jericho and Hunter Hearst Sheamus hit Jericho with the Brogue Kick for the win.

8:43: Charlie Sheen via Skype was worse than the UFC’s satellite interviews.

8:46: Mae Young’s son, the hand, wished AJ best of luck in her marriage to Daniel Bryan. Not sure where his dad Mark Henry was.

8:52: Really, Brodus Clay’s act is really all about seeing Naomi’s junk in the trunk. Clay introduced his tag team partner, Dude Love who is in his corner against Jack Swagger. The Dudettes didn’t come out with the Dude. Swagger jobbed in about 15 seconds.

8:55: My heart just skipped a beat. I see Trish Stratus. She and Triple rekindled this skit from over 10 years ago:

And then X-Pac got creepyish and stalkerish with Trish. Well, he did have sex with Chyna on camera. Might be paying for that one all show long.

9:07: Of course, Slick was going to marry Daniel Bryan (in a full-on white tuxedo) and AJ. Before Slick could marry them, AJ said she was saying yes not to Daniel’s wedding proposal, but to Vince McMahon’s offer of Raw General Manager. Well, the show was really fun until this segment. As if we didn’t see AJ in every other segment already.

9:22: Rock, CM Punk, and Daniel Bryan all in the same ring at the same time? Rock called Bryan “Frodo”. Rock says he’s going to challenge whoever the WWE Champion is at the Royal Rumble. Punk says it’s him. Bryan says he will be the champ and he’s the face of the WWE. Rock says he looks like a homeless lumberjack mated with an oompa loompa and gave Bryan the Rock Bottom as a wedding gift. Pretty fun segment overall and who isn’t looking forward to Punk/Rock and Rumble?

9:45: Bret Hart was relegated to ring announcer status and he announced The Miz vs. Christian and for whatever reason, Miz beat Christian for the IC strap. It was odd timing and it came out of nowhere without a build. Christian looked like a jobber and the Miz gained nothing.

9:58: The show may have jumped the shark. After a nice tete-a-tete between Paul Heyman and Triple H, Stephanie McMahon came out and to say that she is looking more and more like Chyna these days is an understatement. To be fair, she still looks like a woman, but she also looks like she works out about 14 hours a day.

Okay, Stephanie couldn’t ruin it. Heyman saved it. Okay, I lied. They fucked it up. HHH sent Lesnar over the top rope killing the heat for the match immediately. Some will say that it just means that Lesnar is winning ultimately and that HHH had to get his, but it’s so backward.

10:17: At least the Fink gets to come back to ring announce Heath Slater to the ring in his match against Lita? If Lita was in WWE today, they’d tell her to lose weight. She looks pretty darn good to me. Well, he had to take a twist of fate from Lita, a clothesline from hell from JBL (in his Acolytes gear) and then Lita hit a moonsault to win. All the Raw legends that Slater had to face over the past weeks came out so that he wouldn’t get out of dodge. Ron Simmons then hit him with a fat, “Damn!”

10:32: Rock wishes Cena luck and Cena wants to beat Punk so he can face Rock at the Royal Rumble. I’m in either way.

10:39: Yes, an Undertaker sighting and yes, he likes his brother again. And how he looks like a tall Chuck Liddell. Let’s just hope that this doesn’t mean Kane is his next victim at WrestleMania again. If Taker were able to work every now and again, the Brothers Of Destruction gimmick could draw a little bit.

11:11: This is still The Rock’s show, even if he’s only on a few times a year. Punk and Cena ended with Big Show’s interference, screwing up Cena’s Money In The Bank chance (but he’ll probably get the rematch at SummerSlam). Rock came in and was about to give Show the People’s Elbow, but Punk clotheslined him. Punk was playing the bad guy with the good guy’s conscience all match long. Punk then gave Rock the GTS and now, my man has his heat back. Even though the match ended with a bad finish, it made sense because people, we’re building to Royal Rumble.

I have a major issue with how HHH and Lesnar was handled. If HHH is going to be the guy running this company, he needs to drop the ego and in a big way. Other than that, there were small things like the Bryan/AJ angle that fell flat, but wow, they built SummerSlam, Royal Rumble, and nearly WrestleMania all on the same show. They appealed to a lot of fans tonight and I liked it.